Meet Doctor Aphra, a Star Wars Character You are Soon to LOVE

Doctor Aphra is one of the most interesting characters in the Star Wars galaxy, yet most Earth nerds in the Milky Way have never heard of her.

Marvel’s Star Wars comic books have introduced some amazing new characters in the years since Disney’s purchase of Star Wars and the subsequent relaunch of the comics. But the breakout star in the comics is no doubt Doctor Aphra, who first appeared in Darth Vader’s self-titled comic.

Doctor Aphra may or may not hold a PhD (I don’t know how those things work in a galaxy far, far away), but she is both an archaeologist who searches for lost weapons, as well as a brilliant droid technician who excels at programming battle droids.

She also has quite the smart mouth on her, which undoubtedly is part of the reason she’s become such a fan favorite. She steals every panel she appears in, which is quite the feat, as she works alongside Vader. She’s smart, she’s talented, she’s unpredictable.

Why every Star Wars fan will love Doctor Aphra 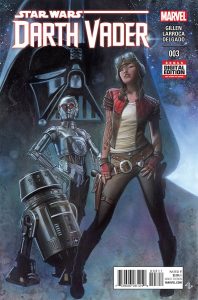 Her writer, Kieron Gillen, describes her more as Indiana Jones than Han Solo, but let’s share a few more things about Doctor Aphra, so you will want to rush out and buy her comics.

She’s an archaeologist, specializing in weapons. Her introduction in Darth Vader #3 plays out pretty parallel to the opening sequences of Raiders of the Lost Ark, so she had me at hello. But as much as I love Indiana Jones, Doctor Aphra’s expertise in ancient weaponry and tech is pretty darned fun.

Doctor Aphra has a way with words. She uses sarcasm to mask fear. She drops hints of the truth right in plain sight, allow others to wonder if she is mysterious or shockingly candid. She talks back to Vader. And she’s second to Han Solo in being able to talk her way out of any dangerous situation.

She’s quick on her feet. While she is both brilliant and witty, she also has a knack for thinking quickly on her feet. Time and time again, she finds herself in sticky situations, yet has kept herself alive with some nifty words and decision making.

She has great droid sidekicks. While us OG nerds grew up on R2 and Threepio, spare some room in your heart for Triple Zero and BT-1. Whereas Threepio is bumbling, Triple Zero is straight nastiness. The comedy is still there, but it’s a dark humor with Triple Zero.

And whereas R2 is a loyal sidekick who has saved the galaxy many times over, Bee Tee is a homicidal assassin droid, who looks like an astromech droid only to fool others.

Her ship is awesome. Doctor Aphra cruises the star lanes in a ship called the Ark Angel, and she’s a beauty with a blue and white paint job. The Ark Angel is also massive, which is nice, as it allows Aphra to stash her artifacts. It’s also loaded with weaponry and Doctor Aphra never misses her target.

Doctor Aphra makes her appearance in Darth Vader #3 written by Kieron Gillen and drawn by Salvador Larocca, both of whom just crush it.

She is a primary character in the series, which is absolutely excellent overall and a must read for anyone who is even remotely into Star Wars. Several issues of Darth Vader are on Marvel Unlimited or you can get the first 3 trades from Amazon at a pretty nice price.