Maybe most nerds are generally aware that Marvel has been giving the world new Star Wars comics. And maybe you even have Star Wars #1, thanks largely to the Loot Crate promotion a little more than a year ago.

It’s a crying shame if everyone who is even a casual Star Wars fan isn’t reading every single of these comics, because they are flat out excellent. But before I go into the reasons why you should be reading the Star Wars comics, let me give a brief overview of what we’re dealing with.

Star Wars #1 dropped in January 0f 2015 and was written by Jason Aaron and drawn by John Cassaday. As of this writing, it’s on issue #26. It features Luke Skywalker, Princess Leia, Han and Chewie, and more, immediately after the events of Episode IV: A New Hope.

Running parallel was Darth Vader, written by Kieron Gillen with nearly every issue illustrated by the Salvador Larroca. It featured Darth Vader, of course, plus it introduced Doctor Aphra (we wrote a whole thing on Aphra, considering she is such a wonderful new character. Darth Vader ran for 25 issues.

In addition, there have been a few limited series, such as Princess Leia but Mark Waid and Terry Dodson, Han Solo by Marjorie Liu and Mark Brooks, and even a continuing Poe Dameron series by Charles Soule. More info here.

The writing is among the best I’ve read in comics. While Jason Aaron has been covering the main title, Kieron Gillan has tackled the Darth Vader comics. There is not an ounce of fluff anywhere in the line. The action is wonderful, the plotting is great, and the stories feel very extremely perfectly like Star Wars stories.

But the best news is the writers are getting the characterization perfectly, which is no small feat, considering these characters have been beloved for decades. Marvel has gotten the writing right on these Star Wars comics. It truly feels like a labor of love for the writers. 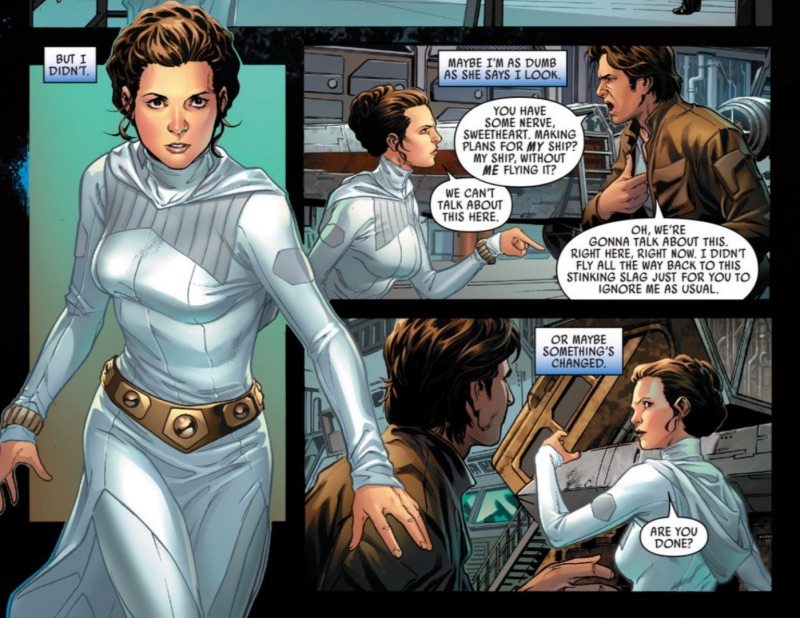 The art is incredible. Marvel has also nailed the look of the characters. This should come as no surprise, considering that John Cassaday, Salvador Larroca, and Stuart Immonen, who are among the very best in the business.

Some key moments from the movies are deepened in unexpected and clever ways. I can’t overstate how much these comics feel like Star Wars, which should go with out saying, yet is whiffed more often than we’d like in licensed properties. This is enhanced when film moments sometimes get a call back.

But wonderful new characters are introduced also! We’ve already covered Doctor Aphra, who was introduced in an Indiana Jones-esque opening sequence that made this nerd’s heart happy. There are other great new characters as well, such as a woman who we’ll say was a very key person in Han Solo’s past, and a couple looney new droids to boot.

The action will make you raise a fist in triumph. Boba Felt throws down on Tatooine, Chewie wrestles with another bounty hunter, and Vader breaks bad on some rather large Imperial vehicles. Of course, there is also some sharp shooting and sharp words. The banter between Han and Leia might seemly only placed in the ‘action’ paragraph, but we all know that verbal action is the kind of action us OG Star Wars fans love as well. 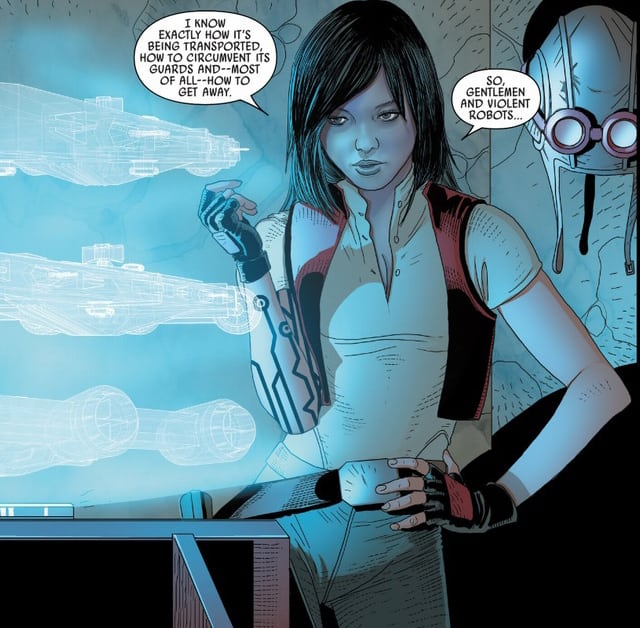 They are self-contained and easy to follow. A frequent and well-deserved criticism against marvel comics is the sheer ridiculousness of their crossovers and how difficult it is for fans to follow along with this a single series or two.

The Star Wars line of comics don’t share this problem. There is a core book (Star Wars) that was accompanied by a Darth Vader book for 25 issues. Each are self-contained and the limited series are self-contained as well. A Star Wars fan can simply get 2-3 comics each month and get great stories that aren’t tied via crossovers to any complicated continuity. It’s just pure Star Wars win.

But the best reason why you should be reading the new Star Wars comics is that are wonderful. They really are, and that’s not hyperbole in any way. If you are even a casual Star Wars fan with a basic interest in the characters shown in the movies, you should seriously consider giving them a shot.

Many are already collected in trades, so it’s pretty easy to put your hands on them, even if you aren’t familiar with the wonderful and weird world of comic shops. Here is Star Wars volume 1, which collects the first 6 issues of the main series. Here is volume 2.

Here is volume 1 of Darth Vader. Then volume 2 of Darth Vader will take you up through issue #12. Princess Leia and Lando are already collected as well.

Road to The Mandalorian: Tales of the Bounty Hunters is the Appetizer You Need

Why Playing with Star Wars Action Figures Might Be Time Well…

Meet Doctor Aphra, a Star Wars Character You are Soon to…