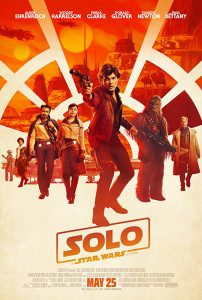 When the movie Solo: A Star Wars Story was announced has a prequel for the character Han Solo from the original Star Wars trilogy, I have to admit that I was disappointed. One of my overall complaints with how the Star Wars franchise has been managed since the end of Return of the Jedi is that every decision that they have made in films seems to shrink the universe instead of expanding it.

While some may call it the Skywalker Saga, it is a vast interesting universe that I think we should get more of and be able to explore. That said, I was excited to see when Phil Lord and Christopher Miller were attached, as they have a proven track record of taking things that just have a glimmer of an idea and making great art out of it. (See: The Lego Movie.)

Eventually, they and Lucas Productions got sideways and they were dismissed from the film, being replaced by the very capable Ron Howard. This week, the rumors hit that Howard reshot nearly 70% of the film, skyrocketing production costs to make it the most expensive Star Wars film to make to date. And while I wish that we lived in a world where I could remove all that from considerations, the truth is that it has an impact as a viewer. So, here below is my generally spoiler-free review of Solo: A Star Wars Story.

Overall, Solo is a decent to good science fiction film. In all honestly, if you stripped away the Star Wars connections, this would be a pretty normal, but well made, Hero’s Journey. We see a young character, we get a a little of his background and off to adventures we go!

Over the course of the movie, he meets allies, makes enemies, has some epic struggles and in the end has a change of heart. It isn’t that the movie is bad at all. But where it falls down is here: it is a Star Wars movie. 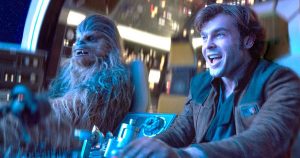 And not only is it a Star Wars movie, it is a Star Wars movie that seems dead set on answering questions about the original Star Wars movies that no one is asking. I mean, seriously, who walked into this movie saying “You know what I really need to know? How Han got that last name Solo.”? (When the 10 year old at the theater I saw the film said loudly out loud “That is so stupid” at the reveal, I applauded him, and I think the only acceptable use of capital punishment is for people that talk at the movies.) It is almost like Ron Howard found his journal from when he saw the original New Hope, found all these interesting to him questions he had from then and decided to answer them all in this film. And, I just don’t know that anyone cares.

That said, there are some nice throwbacks to the original franchise and we see how some famous lines came to be. Without spoiling them, I liked some of those moments but they came packaged with some serious over-the-top “connections” that it made the whole thing have a bad taste. It isn’t as if the whole movie should be spoiled by some of these moments but it is hard to argue that it doesn’t make it really hard to not sigh exasperatedly at some of them. 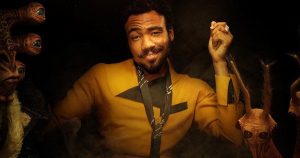 That said, Howard does a good job of telling a story. There is an epic fight that happens that is fairly well done, though, they should send a royalty check to Joss Whedon with the note saying, “Thanks! See: The Train Job.”

Donald Glover continues his global domination tour with his portrayal of Lando; while I don’t think I will ever understand the Star Wars community’s fascination with characters who get basically no screen time (See: Lando. Also: Fett, Boba), Glover is interesting and shows up well.

His droid partner L3-37 is fantastic and is voiced over magnificently by Phoebe Waller-Bridge; I didn’t know I wanted a sassy droid advocate for full rights for her kind but now I am not sure how it would work without her. Paul Bettany is a major character and does fine for what the role is, though I really wish I could see what the original casted actor Michael K. Williams had done with the role. (He was recast when he was unavailable for the Howard reshoots.) 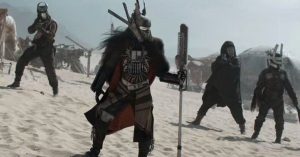 And, honestly, there were parts of the movie that were very interesting. The problem is that they were just not tied to the previous Star Wars movies. The crew that Solo winds up working on, the trench warfare planet scenes and the group that was led by Enfys Nest were all way more interesting to me than some of what the movie spent time on. And I recognize that for me, all of those things expand out the universe, much the way the ending of The Last Jedi did, even though lots of folks hated that ending.

Lastly, the ending has major issues unless there is a Solo 2, because the Hero’s Journey that Solo makes in the 2 films is nearly identical and I cannot imagine him, having done all that he has in this movie being in the place we find him at the beginning of New Hope. And if he is, then he is the slowest learner in the galaxy. But they do seem to dangle some threads there in a way that they most definitely did not at the end of the last Star Wars Story we saw, Rogue One.

Solo: A Star Wars Story gets 6 out of 10 Nerds and I hope one day to see the Lord and Miller cut.

The Nerdy Jobs Podcast: An Interview with Erik Mona about Pathfinder 2nd Edition