Dennett is an atheist, part of a movement that calls themselves the “Four Horsemen.” Dennett and his colleagues study the mind, intentionally trying to decouple it from religious thought.

Interestingly, Dennett has done research on the effects of playing with toys, so we’re going to spend a few moments talking about some sweet Star Wars action figures.

Well this got weird fast. I mean, this article went straight from religious thought to waxing philosophical about Star Wars toys. Yet while it might seem like some steps are missing, I promise I’ll get there. But before we go any further, let’s acknowledge the most befuddling philosophical conundrum of them all, which is fandom itself. 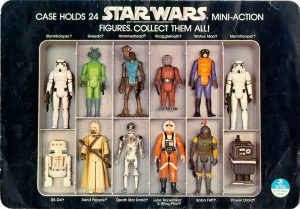 Don’t try to understand fandom. It lies beyond the realm of analytic comprehension. Asking why some adults compulsively horde with religious fervor every Star Wars toy released since Empire’s release in 1980 is tantamount to asking why the universe exists. It just does. And they just do.

I should know: I have boxes full of stormtroopers.

Instead, simply accept the fact that fandom is illogical and let’s lean into it. With this mindset, it’s pretty easy to mash up religious thought and Star Wars toys.

In the 16th century, St. Ignatius of Loyola designed the training manual of the Jesuits, in which adherents were to deeply imagine themselves partaking in incidents from the life of Christ, creating internal and personal “virtual realities” as a means of coming closer to God. Ignatius thought that to deeply imagine themselves walking along with Jesus would help them to live a life well lived in the real world. This built on work from Plato, Aristotle, and Socrates.

Sixty-five years later, the Spanish nun Teresa of Ávila wrote a prayer manual called The Interior Castle, but you could easily say she wrote a “Player’s Manual.” The Interior Castle described Ávila’s path to God as a kind of single-player game of D&D. She described the soul as a crystal globe, containing seven mansions to represent seven stages of deepening faith. Throughout the book, she warned that this imaginary internal world will be constantly assaulted by reptilian “toads, vipers and other venomous creatures,” representing the dangers to a soul that must be vanquished. Teresa of Ávila was totally a real-life cleric, y’all.

Similar techniques exist in many world religions, like the inner visualizations of Buddhism, for example. Those mystics and more speak to the importance of imagination, speaking of the vital importance of daydreaming and fantasy, and in their cases, imagination as literally the door to divinity. 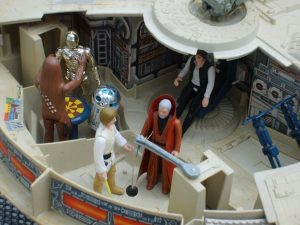 Dennett observed that something equally interesting happens when we play with toys. Sure, action figures are physical objects but they don’t have minds, obvi. But what if action figures actually had plans of their own?

Dennett calls this the “intentional stance.” Think of it this way: when you play with Chewbacca, you don’t just plop a piece of plastic into the co-pilot seat of the Falcon. No, you recreate scenes plus absolutely make a Wookiee sound and you fly the ship through the air to mimic making the Kessel run in less than 12 parsecs.

But what if some smart alec in the Mos Eisley cantina corrects Solo, letting him know that a parsec is a unit of distance, not time. Would Chewie rip that smart alec’s arm off for embarrassing his best friend?

Now, deciding what an action figure will do is different than predicting what a real person will do in similar circumstances, so Dennett would warn us about wrongly projecting intentions onto inanimate objects.

Yet we do it all the time. Chevys and starships don’t respond to begging, yet anyone who has driven a clunker has at some point begged their car to start, much like Han Solo begged the Falcon to hold together. Or what nerd hasn’t wished upon a dice roll.

Sure, these are superstitious beliefs. Lightning doesn’t strike because Zeus is angry. But just like Teresa of Ávila or St. Ignatius of Loyola hoped for us, we can use our imagination to picture the best behavior for ourselves, thereby taking a baby step towards being more pure in our intentions. This is why I love to listen in on my girls playing with their superhero action figures.

Fake it until you make it, in other words. Imagine you are a Jedi, committed to the Light Side of the Force. Or maybe you are a roguish smuggler, but imagine underneath all that you have a heart of gold.

Like many nerds, I spent my introverted childhood in my mind, reading, writing, and playing with action figures. Tolkienesque fantasy, Claremontian prose, and yes, tiny plastic Stormtroopers cut straight across my Western-thinking subconscious, allowing me to become a heroic adventurer in a galaxy far, far away that was full of fantastic creatures. I embarked on missions to rescue princesses and fly starships, driven by honor or at least an opportunity to get a fat reward.

And although our culture dismisses our use of the imagination as wasted time that distracts us from the real world and proper responsibility, I encourage you to pick up that Rey and Finn or grab the character sheet for your Paladin.

Imaginative play is not the same thing as making positive, constructive life choices but we’ve always heard that practice can make perfect.