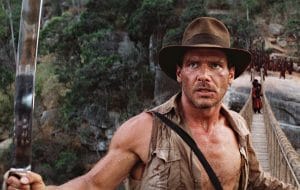 But 5 actors have actually played the role of Indiana Jones. Let’s count them. Harrison Ford (of course), but River Phoenix also played Indiana Jones in the movies. Then there was the Young Indiana Jones Chronicles television show, in which Indiana Jones was played by 3 more actors. That show had the young 11-year-old Indy (played by Corey Carrier) as well as “Old Indy” (played by George Hall), who would pop up with some folksy wisdom. But it was Sean Patrick Flanery that nailed the character in the TV show.

See, other actors besides Harrison Ford can be Indiana Jones. So why not reboot the franchise with a brand new actor?

I realize it is sacrilege and the Harrison Ford lover in me is having trouble even typing the words, but the man will be 80 before we know it and the real world aging we see in the movies will require that Indiana Jones 5 will be set in the 60s. That is getting too close to the recognizable modern day to carry the pulpy archaeological fun of the franchise. Do we really want to see an 85-yer-old Harrison Ford trying to pull off disco?

Indiana Jones was famous for saying that pieces of art “belong in a museum”, but in our clamoring for Ford to continue in the role, I’m afraid we’ve relinquished the Indiana Jones franchise to a museum piece, an archive stuck in time.

But modern audiences needs Indiana Jones more than ever! The world needs more movies that inspire our young kids to be archeologists, scientists, and historians. 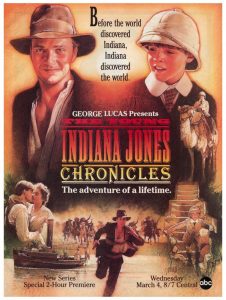 I’ve said this before about the reboot of the Ghostbusters franchise, but I think it needs to be reiterated here. Indiana Jones never had any super powers outside of a highly respectable PhD in history. Dr. Jones was a professor, a lover of history.

As the father of two young girls, I want them to be able to enjoy movie franchises where the hero might inspire them into an interest in history and archaeology, just as Raiders of the Lost Ark inspired me as a boy. So we need to say ‘goodbye’ to Harrison Ford and ‘hello’ to a new Indiana Jones. Thankfully, The Force Awakens showed the world that this is not only possible, but can be done incredibly well.

Better yet, give us two new Indiana Joneses! Disney now owns Indiana Jones, so ABC would be an excellent TV option. Even though George Lucus was already into his late career funk, The Young Indiana Jones Chronicles was a great show, even if it might have been a little ahead of its time. With a two million dollar an episode budget that’s on par with Agents of SHIELD, a new Indiana Jones television show could be shot on location and costuming could recreate the time periods with ease, much like we’ve seen with Agent Carter.

Imagine an early career Indiana Jones who hopped the globe week-to-week in search or artifacts, while the overarching story of the season would contain a big bad like the Nazis. Viewers could have pulpy action and adventure on a weekly basis. Stare directly into this screen and try and tell me you wouldn’t watch the heck out of that. 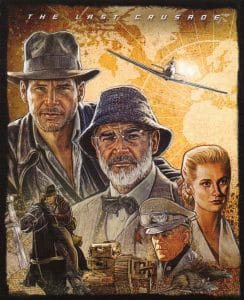 Indiana Jones is bold, lucky, smart, daring and worldly. I picked up as much when I was a kid. I’ve watched Indy dig for treasure, dodge traps, and fistfight Nazis. And that sparked an interest in history that has brought me to write things like this, this, and this, all because I wanted to be like my hero, Indiana Jones.

Watching Indiana Jones can make young kids want to see the world, and it’s about the only thing I know that can make anthropology and library research feel cool. Indiana Jones movies materially affected my life, and I don’t want to deny today’s kids that same opportunity.

Rebooting Indiana Jones rightfully should make us all anxious, as he’s one of Hollywood’s most beloved and recognizable characters of all time. But to turn him into an artifact should fill us with even more anxiety, as that means Indy will only hold meaning for one generation.

My oldest will be 10 when Indiana Jones 5 hits theaters. In this world of Transformers and superheroes, I want her to have a hero whose powers amount to a PhD, language skills, and the ability to think quick on his feet. That is why Indy’s special. As a kid I knew I couldn’t grow up to be Batman, but I could conceivably be an archaeologist, travel the world, and learn history.

We need heroes like Indiana Jones right now. The world is global and we need heroes that can navigate other cultures. That, along with some technological know-how, will be the defining skills of the 21st century. We need a 21st century Indy.

Fortune and Glory: A Case for the Archeology of Indiana Jones

32 Nerdy Things For My Son on My 32nd Birthday

Fortune and Glory: A Case for the Archeology of Indiana…

Harrison Ford is Bringing Back Indiana Jones and There are…