This is the third part in a series on the Question. If you missed the earlier installments, you can find part one here and part two here. 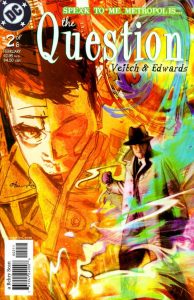 This is where things get weird.

I mentioned last time that the Question lends himself to a tremendous variety of stories, and if you haven’t figured it out by now, the entire purpose of this series is to chronicle some of those shifts. We’ve already seen him change from a hardline, two-fisted bruiser to a low-key, introspective urban monk. Now we’re going to take a sharp left turn into Rick Veitch’s version of the character from 2005. We’ll leave behind the windbreaker, return to the trenchcoat, and visit the shining spires of Metropolis to observe what might be the strangest interpretation of the character to date.

Veitch makes some pretty significant changes to the Question. First, we’ve left Hub City; the first issue opens with the Question operating in Chicago. Second, there’s now a new layer to the character, one that…well, there’s no way to get around it: the Question gets so high that he can actually see the astral plane.

It’s like this. Throughout all the changes the character has experienced, a handful of elements have remained constant. One of those is the gas that the Question uses to transform into his alter ego. Behold: 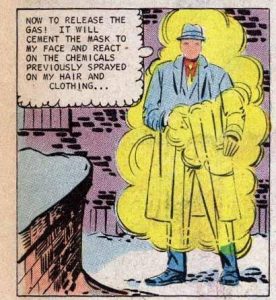 Veitch makes the entirely reasonable assumption that years of inhaling that stuff cannot be good for you, and that Vic Sage has learned, over the course of his career, to enter into a kind of shamanic state in which he can communicate with the spirits of the city. He walks in two worlds, as he says, and when he does, the city talks to him.

It’s a neat idea, and as soon as this miniseries was over, it was dropped like a low-performing stock, never to be seen again. But for these six issues, it’s a major plot point, one that sees the Question stumbling into the middle, of all things, of a Superman story.

Enter the Man of Steel

This is a Superman story, almost more than a Question one. And if you can get past the vivid hallucinations, it’s actually a pretty traditional one: Lex Luthor’s in it, and Lois Lane, and even a good old-fashioned death ray, albeit one that’s powered by feng shui. And Veitch has some pretty clever ideas about Superman, too; the bad guys know that he can catch them if they ever act too brazenly, so they only commit crimes when natural disasters draw his attention away from the city. And then there’s the recurring gag about bathrooms: Superman is recognized to be such an upstanding citizen that criminals sell drugs in bathrooms, because, naturally, he isn’t going to spy on anybody in there

It’s a competent, if not masterful, characterization of Superman, but one we don’t get to see too often.

The characterization of the Question, aside from the fact that he’s higher than Timothy Leary at a Willie Nelson house party, is something of a throwback. He goes back more to his roots here. Not only does the narrative lean heavily on Sage’s status as an investigative journalist, but there’s a brutality that was missing from the O’Neil run. That version of the Question could dispense a heckuva lot of pain, but not quite to the degree of this guy.

I suspect that there’s a little bit of Rorschach in there influencing Veitch’s take on the character. One early issue prominently features a cleaver in what I assume is an homage to Moore’s antihero, and Sage’s extended, pseudo-poetic monologues would be right at home in Rorschach’s journal.

I try to spend a hundred words or so every time I do one of these to talk about the art, but I really don’t know where to start with this. I like it, obviously–it pops. It’s dynamic. Edwards is far more abstract than either Ditko or Cowan, and his depiction of the “other world” viewed through the Question’s tripped-out eyes is nothing short of surreal, full of blinding colors  and solid black silhouettes. Superman, glimpsed through the Question’s eyes, is a corona of light, spiritual energy nearly uncontained. It’s a clever visual trick, one that emphasizes Superman’s other-ness in a way that’s consistent with the way in which he is occasionally interpreted as a sun god.

The climax–which involves a skyscraper powered by ghosts–is packed with tendrils of light and various other elements of psychedelia. It’s a visual feast, is what I’m saying. Tommy Lee Edwards (who also did the coloring for this series) is a unique talent. Raise a glass to him sometime.

That’s about all the time we have for today, Nerds. Next time, we’ll be addressing one of the most famous versions of the Question. No spoilers, but here’s a hint:

As always, you can read my all-ages comic, Library of Alexandria, on Comixology!