When I was a kid, I’d buy a whole bag of little green army men for under a buck, then spend hours blowing them up with firecrackers. I grew up in West Virginia, so what else did you expect?

I’m much less destructive as an adult, but I still like to play with army men from time to time. I get together a few times a year with a good friend of mine and we play one of the scenarios from Memoir ’44, a historical game when where players replay World War II skirmishes on a hex board. 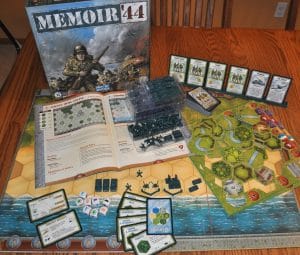 Memoir ’44 features player versus player scenarios that last no more than an hour each. Each scenario is an historical battle from World War II. One play plays the Axis side, while the other player is the Allies.

The base game comes with a nice hex battlefield that is seperated into three sections. More on that in a moment.

Memoir ’44 also contains a whole box full of little green army men. In fact, there are infantry units, artillery units, armored units, plus items like sandbags and bunker tokens that allow each scenario to be uniquely set up and given historical realism.

Then there are the cards and battle dice. Each player has a hand of cards with actions and tactics displayed on them. A card might allow you to order two units in a particular section on the battleboard, like ‘Attack with Two Units from the Left Section.’ Or a card might allow a Special Forces reaction.

Players then roll their battle dice to resolve that particular conflict. If you roll a grenade symbol, for example, you are allowed the satisfying action of knocking one of your opponents little green army men off the battleboard.

There are several reasons that Memoir ’44 is such a wonderful game:

The combat system is simple, yet very satisfying. Using the hex board with three sections in conjunction with cards and battle dice, simply works. It’s a straight-forward and very elegant system that is easy to learn, yet remains very satisfying to play. In fact, this “Battle System” designed by Richard Borg forms the foundation of a lot of other highly popular board games like Battlelore.

Setting up historical war miniatures is really fun. The fact that each scenario involves setting up various units on a board that strives to be historically resonate is really fun. Add three infantry units, a bunker, and an artillery unit? Yes, please!

It is highly repayable. Every scenario is different obviously. The fact that every time you play is a different setup allows Memoir ’44 to be really replayable. You don’t get bored with this board game. In face, there are tons of expansions that add historical battles like those from the South Pacific, for example.

Each play adds up to a greater whole. Since each scenario is historical and recreates a single, distinct battle from World War II, you have a sense of progression with the game. My buddy and I have played through more than a dozen scenarios and they have marched us up the Sword and Omaha Beaches, through Operation Cobra, into the Liberation of Paris.

It’s wholly fun, even as it feels good to play it. Memoir ’44 is fun. Period. But you also learn something during the game. In a small way, Memoir ’44 evokes a respect for these battles that took so many lives and were such a significant moment in modern human history. That’s not nothing. 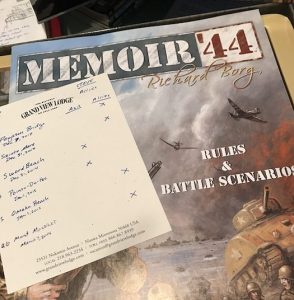 The beautifully designed, elegantly simple gameplay, combined with the pure fun of the game makes Memoir ’44 an easy recommendation. I’m never removing it from my game library, that’s for sure.

I recommend you think of a buddy that you’d like to get together with a few times a year, then put some dates on the calendar where you get together and play Memoir ’44. My buddy and I keep a written log of who has won each scenario we played, plus the date we played it. (Spoiler: The Axis is up 7 scenarios to 6.)

The base game gives you all you need for about 15 scenarios of gameplay and it’s less that $40 via Amazon. When you factor in all you get in the box, plus that it represents so many hours of enjoyment with a friend, it’s an absolute steal.

Friday 5: The Nerd Culture Highlights of the Week