Previously on Nerds On Earth’s history of the Question…

[tw-divider]Nerds On Earth Presents: The History of the Question, Part II[/tw-divider]

Steve Ditko’s Objectivist crusader languished for a while after Charlton comics folded. In the 80s, DC Comics acquired the Charlton stable of characters, including Captain Atom, Blue Beetle, and, yes, the Question. (This is also around the time a weird British dude named Alan tried to write a comic book about Captain Atom becoming a god and Blue Beetle getting erectile dysfunction, but that’s another story). Somebody needed to reboot these guys. 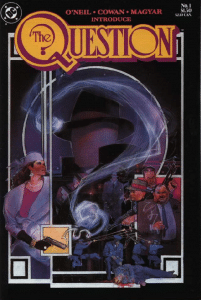 Denny O’Neil, famous for Batman, Green Arrow/Green Lantern, decided to reboot Vic Sage into something a little different, and in so doing, started the grand tradition of the Question being a uniquely nebulous character. As we’re going to see as this series continues, everyone who has worked on the Question has been able to make him into whatever he needs to be, and in 1986, that was an introspective street-level detective, willing to take on the establishment just as often as murderers and supervillains. In that way, he shared a lot of the social angst of “Hard Traveling Heroes”-era Oliver Queen, only without a face.

O’Neil’s run opens with the Question as we know him–humorless, uncompromising, and arrogant. It lasts about an issue. Then Sage meets Lady Shiva–you know, Lady Shiva–and gets the ever-loving dog snot whipped out of him. 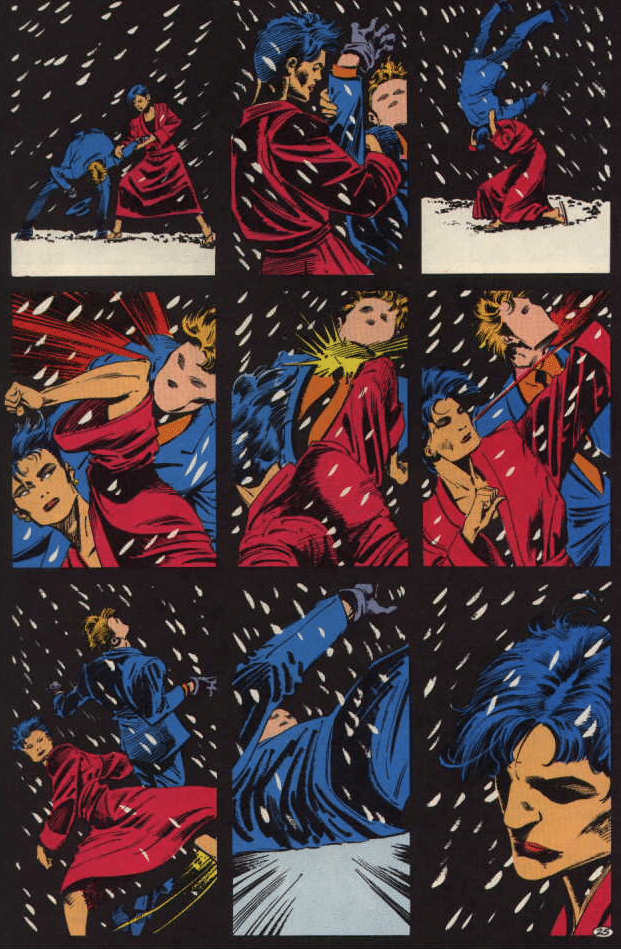 Then he gets shot in the head, but only a little, so it’s okay.

Beaten, humiliated, barely alive and in a state of delirious incoherence, Sage is in a pretty bad place, and it just gets worse when Batman shows up for a roast session.

Essentially hollowed out from the experience, Sage finds his way to Richard Dragon, a kung-fu master who teaches patience, discipline, and the ability to punch through trees. Sage returns to Hub City, which in the grand tradition of cities in the DC Universe, is a grease trap filled with the worst people in the universe, like this corrupt police officer with an inexplicable acrimony towards Frosty:

Hub City is as much a character as any other in series, and O’Neil gives it an individuality and style all of its own. Not as aspirational or shining as Metropolis, it doesn’t attract any alien invaders or brilliant mad scientists. Less grand and imposing than Gotham, it lacks any flamboyant psychopaths trying to poison waterways or commit themed crimes. Hub City is just a bad place, oppressive, filthy, dreary, gloomy, and hopeless. It’s always either snowing or raining. And the people who live there share that grim depression. The crooked politicians, mobsters, and thugs running around the place are in it for cheap thrills and cash, not the chance to go toe-to-toe with a superhero. O’Neil uses this more noir-style setting to tell a different kind of superhero story; for example, there’s an extended subplot about a mayoral race, and it’s one of the most entertaining and engrossing things I’ve ever read.

O’Neil also takes the opportunity to delve into a bit of the contemporary. There’s the standard hysteria of violent street crime that was pervasive in the pop culture of the 80s, of course, but also alcoholism, insanity, sex, drugs, and lots of violence. Vietnam looms large in these pages, as it does in Watchmen, which, again, is another story. Speaking of that seminal work, the Question has some opinions:

Denys Cowan is no Steve Ditko, but that isn’t meant to be a criticism, because, statistically speaking, only Steve Ditko is Steve Ditko. Cowan is amazing here–the faces he draws are scratchy and gaunt, as though they’ve been around too long and seen too much. There’s something balletic about the way he illustrates the action sequences, which are frequent, and often feature no dialogue.

There’s also something about the Question ditching the long coat for a windbreaker. I don’t know if I love it or hate it, but it certainly is a bold choice, and one we haven’t seen often enough since.

So Cowan brings his own style to the character, and that’s not unique to him. Indeed, in the same way that everyone who writes the Question gives him something new and different, every artist builds a completely different world around him. That’s really the central notion behind the character, the reason he’s so versatile, and why I find him so fascinating: You can project whatever you want onto the Question. He has no face, so we can see whatever we want to see. The man who is nobody can, in fact, be anybody.

So far, we haven’t seen the Question be anything that unusual. But that’s going to change soon, because next time, we’re going to strap in and try and figure out what’s going on with this: 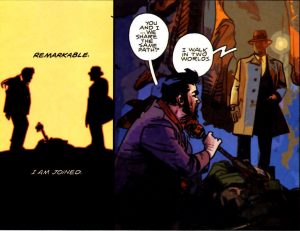