A Marvel Zombie Tries DC REBIRTH, Then Writes About It, Part 3

If you are paying any attention to the comic book world, you know that DC Comics has just launched what they are calling Rebirth, essentially resetting the universe and establishing a new starting point. (They previously did this with the New 52 in 2011.)

In general, I am a Marvel guy; cut me and I bleed X-Men and Avengers and try to patch the wound with a steady run of reading from the Marvel Unlimited app. But I am not so Marvel that I am not willing to give DC books a try.

But first, I wanted to talk about an issue with DC’s whole Rebirth strategy that has absolutely nothing to do with the content on any of the books.

As I choosing my books, I noticed that DC did an interesting thing. Every book gets a title like this: Titans: Rebirth #1. Makes sense and I understood. So when I go to watch the story continue, it doesn’t happen in Titans: Rebirth #2. It starts in Titans #1.

So in what I can only imagine is an attempt to ship as many different number 1s as possible, it has made it difficult to follow the series, especially if I liked it. I am not the smartest man but I imagine anyone without the help of a shop owner was easily confused by this situation.

That said, on to the titles!

A Marvel Zombie Tries DC REBIRTH, Then Writes About It, Part 3

Titans: Rebirth #1. This very much feels like the next piece in the line that went from Rebirth to Flash: Rebirth to this book. It continues Wally West and his quest to have others remember him and start to repair the universe. It isn’t without its faults, especially Arsenal and his wierd baseball hat thing. I was nervous there would be more pouches added.

Justice League: Rebirth #1. Not a bad first title. Bryan Hitch is artist and writer and he’s a capable story teller. The team is keeping the same basic line-up as before: Superman, Wonder Woman, Flash, Batman, Cyborg and Aquaman. Superman seems to be wishy washy on committing to the team but the addition of the two new Green Lanterns has some potential.
Books I pressed on with the next chapter: 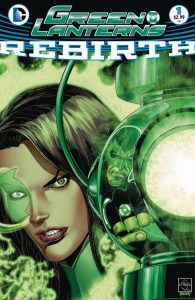 Green Lanterns. One of the things that I am realizing is that I want new, fresh characters. And while these are essentially taking the mantle of an existing character, there have been enough Green Lanterns over time that they do manage to feel like new characters, even with the power ring and Green Lantern mystique behind them. Thus far, I really like this book and want to stick with it.

Green Arrow. Truthfully, I would have thought a return to Green Arrow’s social justice roots would appeal to me but there is something about it that just doesn’t quite fit. My favorite Green Arrow book was Mike Grell’s Longbow Hunters, which was much darker than this and consequentially, I am having a hard time getting on board with this one for the long haul.

I do appreciate the work that is happening in this title as they restore Green Arrow and Black Canary as a couple, and it is fun to see the early stages of that here. 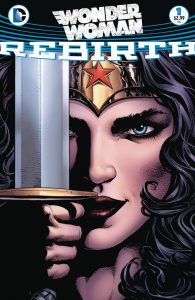 Wonder Woman. I am all in. I’m a sucker for Greg Rucka as a writer and the Nicole Scott art is phenomenal on her weeks. The back and forth from the origin to the current day depending on the issue is going to be interesting moving forward and because it is shipping at the speed that it is, I don’t dislike what is happening in either story. Solid book and I will stay with it for certain.

Batman and Detective Comics. The Tom King penned Batman book is good and feels very Batman-y. It is early. One of the things that they aren’t doing is messing with the numbering for the Detective Comics book, or its Superman colleague, Action Comics.

The story in Detective is much more interesting to me, as it feels like a team book in a way that we haven’t seen DC do well in a long time. Think vintage New Mutants with the Professor X role being played by Bruce Wayne. I am curious to see if they can keep it up.

And I bailed on the Superman books. The buzz on them is good moving forward and I really do appreciate some of what I have heard from about the books but it definitely feels like a chance to wait for the trade.

Finally, there are more upcoming Rebirth books that I will be checking out now that I understand their marketing department. So, more to come.

The Kree-Skrull War: Military Ethics from One the Avengers Most Epic Stories