A typical D&D character sheet has a space for height and eye color, but in terms of creating an interesting character, those physical features are about as helpful as wondering if your D&D character were a piece of Ikea furniture what piece would she be.

The answer to that is obvious…Kallax bookshelves and I don’t want to be surrounded by a nincompoop who says Billy bookcase, although I will entertain arguments that support the Skjarnngflong Lingonberry Dombas Skanka or…gosh, what am I talking about?!?

Well, the answer is an alchemist’s brew of problems, ideals, conflicts, values, bonds, limitations, complications, and fears. Now, if you are familiar with D&D 5e, you’ll realize that the designers baked some of these things into mechanics of the game, brilliantly placing it front-and-right on the character sheet.

I think this is excellent, so let’s unpack what’s D&D 5e official in terms of character creation, then add a few more thoughts to take it a step forward. 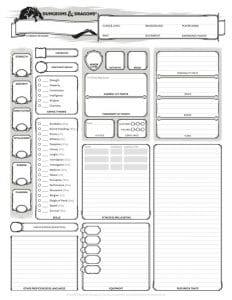 Download a D&D 5e character sheet. Assuming you have nice broadband and aren’t experiencing the Comcast issues I am (Gah! That company drives me nuts!), I have the time to wait.

Now, cast your gaze toward the upper right of the character sheet. The four boxes for Personality Traits, Ideals, Bonds, and Flaws can be incredible tools for creating great D&D characters, so let’s start there and not try to get over-complicated.

First are Personality Traits. Oddly, this can be the least interesting in terms of fleshing out a character. You might as well focus on Ikea furniture type (seriously, it’s Kallax) if you keep this strictly utilitarian. “My character talks British and dresses well.” ZZZ-Zzzz-ZZzzz-hngGGggh-Ppbhww- zZZzzzZZ…

No, make sure the personality traits are quirky (here’s a table to help you with quirks)! Do mark your  hair color and note their fashion choices, as a utilitarian description is well and good, being that we want to take away a visual thumbprint of that person.

But if you want that visual thumbprint to be pushed hard into the squishy clay of the other player’s memories, you need to find the things that make the character visually unique, interesting, odd, curious — different. 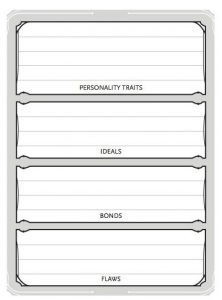 This is fantasy. There is no reason to have have unmemorable personality traits. Use some of the tables from the character backgrounds included in the Players Handbook, but egads, nerds, push them further and turn them slightly askew.

Many have criticized alignment in Dungeons and Dragons, but I’m a fan. I strongly feel that determining what a character’s Ideals are is important. What does your character stand for? How willing are they to stick their neck out when push comes to shove?

If the party’s cleric cares only about looting corpses for copper pieces, then it’s time to find another line of work.

And in a stroke of irony, a character’s ideals can be a limitation for them. These ideals should create conflict within the character, potentially limiting them in some way, as they may have to alter their problem/solution dichotomy as adventures are thrown at them. If your paladin has a “code of honor” then those ideals should limit him from acting dishonorably. This offers new plot angles and opportunities for tension, since the villains won’t be afraid to cross lines the Paladin won’t.

Ideals might get in the way, even as they help paint a portrait of their heroism. Will the character stand by their deepest beliefs or not? Us real folk wrestle in this way, so we should wrestle with it at the gaming table as well.

Bonds gets really interesting as they represent the people, places, or things that anchor or entangle the character. They also provide great adventure hooks for the DM.

Who does the character love? What places are most meaningful to her? Has he sworn allegiance to another? Is there a bounty on her head? Is there another person that doggedly pursues her? Does he have siblings, family, a lost child? Bonds are a wonderful tool in creating great D&D characters. They can drive the character, while also ripping them to shreds.

Finally, we come to Flaws, which are essential for a great D&D character. These can be physical flaws, like your pirate rogue has a hook hand and struggles with two-handed weapons. But it’s best if the complication deals with their character.

Bruce Willis’ flaw in Die Hard wasn’t that he wasn’t man enough to deal with terrorists or handle a little broken glass like a yippie-kay-ay cowboy. His flaw was that he was more married to his job than he was to his wife, which opened the door to the entire conflict on the movie. Gosh, I love Die Hard.

But my favorite use of the flaw mechanic in D&D 5e is to highlight their greatest fear. What does the character fear most? Love. Disease. Bees. Toddlers. Chimpanzees with clown makeup. Lady Gaga. Whatever.

It’s useful to identify the character’s fear — meaning, the thing they most don’t want to encounter or see happen — because as the story unfolds, and if the DM is rightfully cruel, there is now this awful thing that can be brought out of it’s demon-box to threaten the character, seeing which way she jumps. 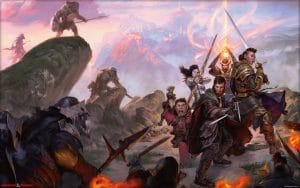 So, yeah, use those four little boxes that might seem like an afterthought on a D&D 5e character sheet. Just remember, you don’t make characters on the fly; they are a long-bubbling broth developing flavors the longer you think about them and, more importantly, the more you play with them.

But even before that first play date, I’d encourage you to take your character for a little test drive. Write a thousand-word piece of fan fiction with Your Brand New Shiny Character in the starring role. Set her on adventure! Ding him up. Challenge him! Force her to talk to other imaginary characters: an obstinate NPC, a drunken orangutan. IDK, just something quick. But I’m super serious about this.

The character’s voice and behavior is as alien as a Mind Flayer to you at this point — so filling in 4 boxes of details and entanglements doesn’t simply let you zip into their skin and grab their vocal chords like a flight stick in order to pilot them around.

So give them some thought. Write that little bit of backstory for them, then wait a couple days and go back at it with a red pen. Sharpen that character up like a stake you plan to stick into a vampire’s chest.

Then take that character to the table and watch them fall apart. Because the entire point of D&D is the adventure that is about to come. The problems the DM will throw at you is why the character exists in this storyworld, and will ultimately define the character’s journey.

How will your character hold up when he is hunted by an unkillable star beast, trapped in an shadow plane, pursued by a goblinoid crime syndicate, has his life’s worth stolen by dungeon-dwelling lizard-folk, then realizes he can’t find gluten-free muffins in Waterdeep?

Well, if you’ve created an interesting character they will not only find a solution to those problems, but will also prevail in all the conflicts between. But even more importantly, they will be thoroughly and amazingly memorable and a heaping-heck of a lot of fun to play.

Have you ever written in some completely custom, off-book Personality Traits, Ideals, Bonds, or Flaws?  If so, drop in to our Character Sheets Facebook group and let us know what they were and how they worked out!