Meet Gateway, the Aboriginal Teleporting Mutant Member of the X-Men

X-Men was the #1 selling comic book in the 80s by a wiiiiiiide margin, so like so many others, I was grabbing X-Men comics off the spinner racks by the fist fulls. And even though he’s a deep cut, I loved Gateway, their mysterious Aboriginal teleporter. 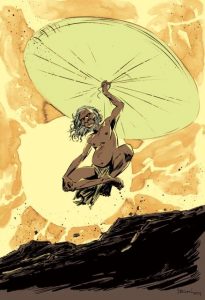 Australia has a beautiful mix of interesting cultures, dating well before colonial times and it was fun that X-Men featured a character from that region. But the comics never included a map of Australia that had a big map marked “X-Men headquarters be here.”

This imprecision makes it difficult to exactly pinpoint Gateway’s indigenous origins, yet we have several solid clues that allow us to guess with pretty good confidence. We know that during the Australian years of the X-men, they took over the Reavers’ base that was located in Cooterman’s Creek, a high-tech facility disguised as an abandoned town in the Australian Outback that in X-Men vol. 2 #44 is said to be around 200 miles southeast of Lake Disappointment.

Geographically, that would locate the fictional Cooterman’s Creek in the area of Uluru, a site that is sacred to the Pitjantjatjara, the Aboriginal people of the area. Also known as Ayers Rock, it features a large sandstone rock formation that is surrounded by an abundance of springs, waterholes, rock caves, and ancient paintings.

At this point, let’s do three things:

The clues to Gateway’s geographical origin. Cooterman’s Creek is an abandoned mining town in  the middle of the inhospitable Australian Outback (Uncanny X-Men #249, and the comics that introduced the X-men Australia years.). The town was once booming enough to support a saloon, a hotel called the Desert Rose, and a newspaper called the Woolagarra Creek [X-Men Legacy #220], no doubt a homage Wollangarra, a place in Australia that can indeed be found on the map, even if the climate details were all wrong.

Historically, mining ore was prevalent in that region in the early 1900s, with little towns like this able to flourish in the otherwise arid Outback if it was located near an underground reservoir of fresh water. And Aboriginal people certainly had developed interesting and unique cultures in this region.

Ayers Rock and the Pitjantjatjara people. Chris Claremont was undoubtedly inspired by Ayers Rock (aka Uluru), which is a very real place that has been recognized as a World Heritage Site. And although the comics never really zoomed out to the point that the art gave a panoramic view of Uluru, there are so many wonderful panels of Gateway sitting criss-cross-apple-sauce, perched on the edge of Uluru, peering over into the Outback and Cooterman’s Creek, all while twirling his bullroarer as he teleported the X-Men all over the world.

As for the Pitjantjatjara, they are an Aboriginal people who refer to themselves as the Anangu, which in their language means “human being, person.” (I couldn’t confirm if the term also meant “mutant.”) Today there are still about 4,000 Ananou who have given up their nomadic hunting and gathering lifestyle, and are living scattered in small communities like Cooterman’s Creek across their traditional lands like Uluru, which still possesses important spiritual and ceremonial significance in their culture. 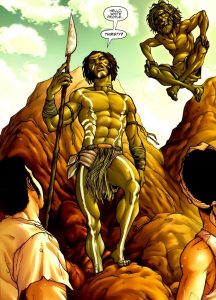 The mutant powers of Gateway. Gateway was always a mysterious mutant, both because he never spoke and also because his origin was so shrouded in mystery. But twirling his bullroarer, Gateway could send the X-Men wherever they wanted to go.

And in addition to his kindly and wise appearance, he also had vaguely empathetic or telepathic powers, although comics are famous for making powers shift to support whatever plot point is current. Still, he always seemed to “know” just where the X-Men needed to be and when they needed to return.

The X-Men Rogue, in particular, formed a connection with Gateway and he’s been considered an unofficial team member for decades now. He’ll routinely pop up in stories from time to time, although precious little of his backstory is ever revealed. Most recently, Gateway is seen near the Jonathan Hickman created Eden Fesi (Manifold) who has similar powers to Gateway and presumedly could be Anangu as well.

Gateway is a great character, even if we’ll never truly see his origins presented in the comics. But kudos to Chris Claremont for bringing in a character that could take readers imaginations around the world.

The X-Men Down Under: Celebrating the Beginning of the Australia Years

Cyborgs and Cybernetics in Popular Culture, From Edgar Allen Poe to the X-Men