The Flinstones Take on America: Politics and Comics

Sometimes you hear that polite people don’t talk about three things: politics, religion, and sex. And for most of the history of comics, religion and sex weren’t really talked about. While that has changed over the last few years in particular, politics have always been a part of comics.

For starters, well before the Pearl Harbor bomb

And Captain America was also prominent at another time in US history. Writer Steve Englehardt, who was a young writer during the time of Watergate, crafted an allegory around a Secret Empire where the leader, who was clearly patterned after President Nixon, killed himself when confronted by Captain America; they later created a scandal where a body double could resign. This led to the Nomad identity and storyline where Steve Rogers wasn’t sure about the America he had believed in and given so much to and for. 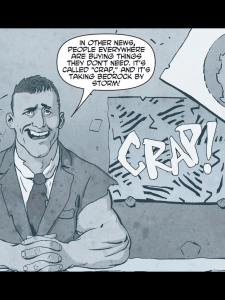 ics have always had a political bent, the most intriguing place where politics and social justice issues are being discussed is in the most unlikely of titles: DC Comics’ The Flintstones.

This book was barely on anyone’s radar when DC, as part of an effort to keep comic book licenses for all Hanna-Barbera properties, began publishing a series of comics around those titles. While they published things like Scooby Doo, they gave writer Mark Russell and artist Steve Pugh the Flintstone title. Now, whether it was a mark of editorial genius or just desire to get a book to print, in choosing the creators they did, they somehow managed to elevate the story to be about way more than Fred, Barney and their families.

It isn’t surprising that Russell would take on politics; his short lived book Prez is all about politics, in particular when a teenaged girl named Beth Ross manages to be elected President. (It pays homage to a similar idea and story that was done in the 1970s by Joe Simon and Jerry Grandenetti.) What is surprising is that it has been so successfully woven into the Flintstones world, has been as insightful as it has been and that there appears to be no desire to reign back the political content. 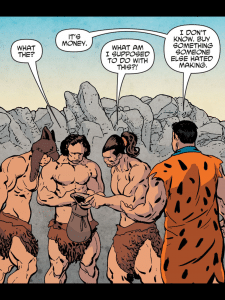 The first trade of the series was recently released and even from issue #1, you see all kinds of issues being addressed.

There is no doubt that part of what works about the politics in the story is that it is based in a world that most readers will understand and is a step just far enough away from our own current context to make its point without feeling overly preachy. Yes, this isn’t a Trump-like figure on the cover being punched by Bam Bam; that directness would hinder the story.

But it is a current example of politics being dealt with in an intriguing way subversively in a great comic that was likely meant to be a minimum run to retain the rights to a property set that DC really didn’t know what to do with. That said, the first trade was just released and is definitely worth checking out.

A Video Introduction to Redneck #1