Review of Valerian: Visually Stunning But Not Much Else

French film director Luc Besson has had quite the eclectic film career. He stormed onto the scene (at least in the English speaking world) with The Professional, an action adventure movie that introduced the world to Natalie Portman in 1994, and then immediately took a hard turn into the weird, zany world of The Fifth Element, which is set in an odd future and tells an original story.

While sometimes faulted for the overall story of the film, there is no doubt that The Fifth Element is a gorgeous piece of cinema, with some of the best visuals ever made in a science fiction movie. So, when it was announced that Beeson would be taking on the much beloved Valerian comic book series, people took notice. 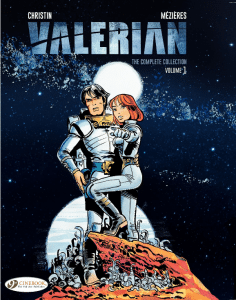 Jean-Claude Mézières and Pierre Christin began the Valerian comic series in 1967, following up on a time where both had been working in mainstream American comics. The themes of the story echo the time, as you have the character of Valerian, an agent who is the epitome of hero, who is often compared and contrasted to his partner, the lovely agent Laureline. They have your standard space opera adventures, including rich political intrigue.

The comics have been translated and collected in a format for American audiences for a long time and, while it has been on my “I Should Read That” list for a bit, I have never gotten around to it.

This weekend saw me head to the theater to see Valerian and The City of a Thousand Planets and it is in an interesting film. First and foremost, the movie is visually completely stunning. It won’t get mentioned by many in the same realm as Cameron’s Avatar efforts but there is some completely remarkable film making.

The opening scenes are really amazing, as we are shown two views at once: one, a real world and another a VR-like hypermarket laid over it. Truly amazing as we see both a desert and people wandering around in it and a rich marketplace laid over it. Very compelling. And throughout, we see more and more circumstances of Beeson and team taking the visuals to the next level. However, one recent film review mentioned that the movie would be an excellent silent film and there is good reason for that. 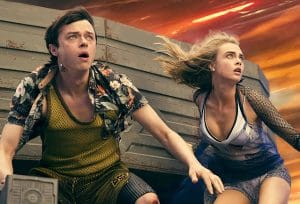 The plot in this movie is never fully realized. I wonder if, in part, this film is made for people who are primarily engaged in its backstory or have some history with the characters. Beeson has gone out of his way to talk about how this film is the most expensive French film ever made, as if that is the primary audience. And, if that is the case, it lacks some of the work needed to arrive at a complete story. Some of the key elements are either left to our imagination or are assumed.

Valerian is played by Dane DeHaan, whose publicist needs some bonus props for his IMDB description. (“Dane DeHaan has made a formidable impression on film and television audiences and is one of the industry’s most sought after actors of his generation.” Uh, it took me looking him up to realize he was the number 3 actor in the Garfield Spider-Man movies.) He is joined by Cara Delevinge’s Laureline. While Valerian seems like a swashbuckling, Han-Solo-like character, with a long “playlist” of sexual conquests, Laureline falls flat against him.

I genuinely don’t understand what she is doing in the movie except to for a “will they or won’t they?” plot that ultimately I didn’t real care about because we were never shown they really care for one another. It fakes it and launches it in a couple scenes and then decides that showing us that they are attractive is enough; when it isn’t, they just move on. From what I have read about the comics, Laureline is a much more developed character and here she gets to be attractive, play with a cute creature and, well, honestly, be the damsel in distress.

The film also has a political bent, which isn’t surprising given that it is a French film, but I, for the life of me, couldn’t really tell you what the bent is. I mean, politics are involved and it may be trying to make a statement about war, but that comes across as residual than actually main plot points.

Valerian and The City of A Thousand Planets gets 5 out of 10 Nerds. If you have a cheap theater, it is worth seeing on the big screen for the amazing visuals but don’t assume that you will get much out of it in terms of a plot.