What’s Streaming: The Guardians, the Russian Superhero Film Modeled After the Avengers

In August of 2016, we here at Nerds on Earth got a little excited when the trailer for the Russian film The Guardians was released and highlighted it among the links that were new and nerdworthy for that week.

Somehow, I lost sight of the film after seeing that trailer and while I am not sure if it ever had an American release that was notable, I did realize that it was streaming on Amazon Prime. So last Friday night, my family huddled around the television to watch this Russian superhero film. Here are some key points from the movie, without spoiling the major points. 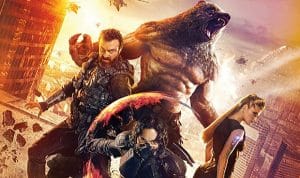 Russian specific powers, including a guy who becomes a bear? Check.

Ethnically diverse as the country itself? Check.

It makes an odd team that almost serves as a Russian Fantastic Four. And the powers are oddly built on as the story goes on as you have an older monk-type figure with earth bending powers, a super fast runner who uses blades to bring battles to an end quickly, a woman who can go invisible in water and scientist who changes into a hulkish bear but, get this, he is slowly losing control of the bear form. In fairness, his control does seem to improve when he dons a very large machine gun.

They evoke American superhero films. Without being tied to American backstories of the Marvel or DC universe, they still manage to make it work as an American-like superhero story. For a small budget film (it was made for around $5 million dollars), the special effects are pretty remarkable. They managed to smartly figure out how to portray powers in a way that works, is believable, and don’t come across too cheesy.

They created a Marvel-like villain.  Just like the Marvel movies, he is both powerful and somehow immediately forgettable. He looks a bit like they bought Mickey Rourke’s villain costume from Iron Man 2 and then meshed it with a decent cosplay Toxic Avenger. At one point, the battle even takes place on top of what looks like the remains of Stark Tower after The Avengers.

(Click here for a look at Marvel’s Russian super-powered characters.)

The Guardians is also very comical in some places, albeit unintentionally. The dub of the movie is really oddly done in places and the choice of voices leaves a lot to be desired. You wonder what would have happened if they had really gone after stellar voiceover talent to make the American dub.

And, oddly, the movie is considered a critical flop, in both the American and Russian markets, and, after a very strong opening weekend, it dropped dramatically and did not make back its original budget in the theaters. Maybe it was too American?

Regardless, if you are a fan of the superhero genre, and you have a decent crowd to wisecrack through the movie with, you should check out The Guardians on your streaming service of choice!