What do the frog men of D&D have in common with the Navy SEAL Frogmen?

Hold your breath as you read this article.

Early into Navy SEAL training, trainees must endure “Hell Week.” Only 25% of candidates make it through that intense week of cold, wet, and brutally difficult challenges, all on fewer than four hours of sleep. Imagine being in shorts, crawling through freezing mud for hours at a time: Hell Week is designed to test physical endurance, as well as pain and cold tolerance.

But it’s primarily designed to test mental toughness, attitude, and a trainee’s ability to perform under excruciatingly high physical and mental stress. Above all, it tests determination and desire. Perhaps that is why so very few make it through.

Those that do go on to become Navy SEALs and are widely considered to be some of the best trained, most competent combatants in any military. SEALs (SEa, Air, and Land) are considered the most elite and flexible commandos, but their Navy training is particularly rigorous.

All Navy SEALs become experts in BUD/S (Basic Underwater Demolition), a distinction that earns them the nickname “Frogmen.” Not only do Frogmen need to perform 2 mile ocean swims but they also dive in a training pool while having the tubes tied in knots and their masks ripped from their faces by instructors to simulate combat hazards.

To say Frogman training is intense is to understate it.

So why are frog men in D&D played for jokes? Your Bullywugs, your Boggards, your Grippli, your Grungs, none of them intimidating in the least. Sure, Grung, like any good tree frog knockoff would, have poison but that isn’t enough to place fear in the hearts of adventurers. 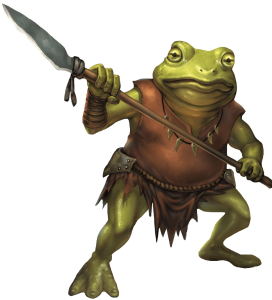 Bullywugs have the longest history (1977), so let’s dig more deeply into their lore. Appearing first in the old school Fiend Folio, bullywugs were portrayed as evil, violent creatures, found in wet, swampy areas. They were bipedal, yet attacked with a hopping charge combined typically with a spear thrust.

They were strong swimmers (obviously), while also being very stealthy and chameleon-like masters of camouflage. Perhaps it’s in this way that D&D frog men are most like Navy Frogmen.

Imagine a squad of Navy SEAL Frogmen paradropping in silently under the cover of darkness, gear and clothing all black. Expert swimmers and with a near superhuman ability to steel their nerves against hostile, uncomfortable environments, the SEAL team slowly and stealthily work their way across the swamp.

Once their targets are acquired, their resolve and discipline allow them to silently wait for the best opportunity, the Frogmen fully submerged if need be. Then like the commandos they are, their black forms raise soundlessly from the swamp. Armed with the most deadly of ordinance, the SEAL team are the predators, while everyone else is prey.

We can visualize that deadly scene and hold a respect for the competency and professionalism of the SEALs. Those Frogmen are feared, rightly seen as a formidable fighting force.

But the frog men of D&D? Well, they just hop around going BLUPBEEEBLLOOOP, played more as a farce than a force. Besides, a Bullywug is a CR 2 creature, tops, so they ain’t much more than a one-shot creature. 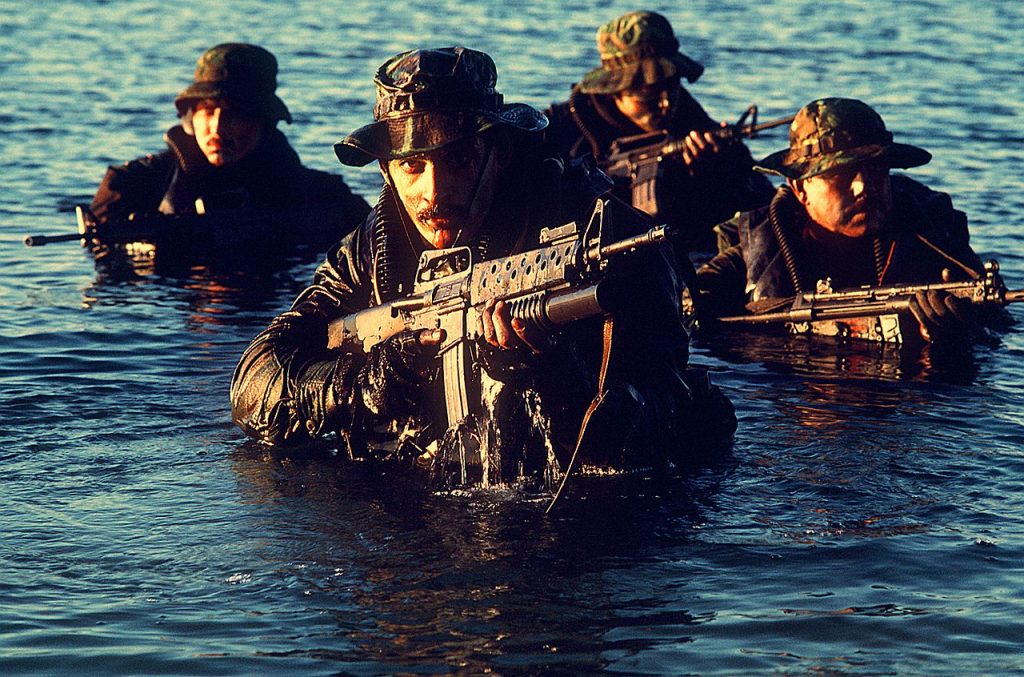 Yet, we can redeem the frog men of D&D. Rather than a cowardly foe who hops about, why not put them through BUD/S training. Bullywugs have both a proficiency in Stealth and the Swamp Camouflage feature, so they should always gain a surprise round on their target, just as a Navy SEAL would.

And with their leaping ability, they would close fast, then be able to dart away, never sticking around in the same grid square like a frog on a log in a bog. Make them spring out of hiding for a surprise attack, then keep them mobile during combat. Finally, make your bullywugs attack in large numbers, surrounding and overwhelming a party. Sure, they aren’t Navy SEAL Frogmen, but D&D frog men need not be the pushovers they too often are.

A character on the Glass Cannon Podcast Ruins of Azlant campaign (paywall) is a RPG character that has more in common with the Frogmen than a frog man. Dracius is a ranger class with the Abendego Diver sub-type that gives him proficiencies with harpoons, as well as granting him the ability to hold his breath twice as long as a typical RPG character.

Decked out in the fantasy RPG version of flippers and scuba mask, Dracius recently found himself exploring a sunken boat. A deadly creature surprised him with an attack that should have shaken his will. But like a good Frogman, he has the ability to perform under excruciatingly high physical and mental stress and went headlong after the creature.

Dracius one-shot it with a harpoon. And that’s how it should be. Because Frogmen are deadly.