Meet Saint Cuthbert, the Patron Saint of D&D according to Gary Gygax

The original rules of Dungeons and Dragons didn’t include a pantheon or fantasy religions. So when the players around Gary Gygax’s table wanted to know who their clerics prayed to, Gygax quickly made up a being named “Saint Cuthbert.”

But like all things D&D, he was a given a fantastical sheen, yet the real life Saint Cuthbert was an interesting figure in his own right. So let’s meet Saint Cuthbert, the patron saint of D&D.

Cuthbert was born in 634, just a few short years after the conversion of the Kingdom of Northumbria to Christianity. Cuthbert grew up near Old Melrose Abbey in today’s Scotland. After some brief military service, Cuthbert decided to become a monk after seeing a vision that St. Aidan–the founder of Lindisfarne–died. He quickly worked his way into an assignment as the prior to Lindisfarne, then ultimately the bishop of Lindisfarne.

In modern terms, Cuthbert’s time the Kingdom of Northumbria included part of northern England as well as parts of Scotland, and the politics of the kingdom were violent, so spreading an understanding of Christianity through the kingdom was a task that lasted throughout Cuthbert’s lifetime. 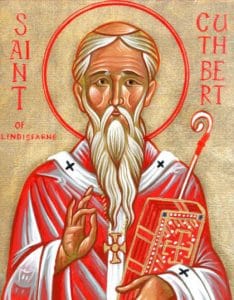 Cuthbert was known for piety, diligence, and obedience, so his name and reputation quickly grew. When illness struck the monastery of Ripon in 664, the prior died and Cuthbert was made prior in his place. He spent much time among the people, ministering to their spiritual needs, carrying out missionary journeys, preaching, and performing acts of service.

Indeed, Cuthbert’s asceticism and piety was complemented by his charm and generosity to the poor. He gained a reputation for gifts of healing and insight led many people to seek his counsel, ultimately earning him the name “Wonder Worker of Britain”. He wasn’t interested in much of that however. He instead desired to live a quiet life in a hermitage as a contemplative at a place now known as St Cuthbert’s Cave, leaving only for missionary and pastoral work.

Nowadays, the name and memory of Cuthbert lives on. There is an Appalachian Trail-like experience in Scotland named St. Cuthbert’s Way. And Cuthbert was known to be a lover of animals, particularly the Northumbria ducks that would nest on the Farne Islands, near where Cuthbert had his hermitage. They are now colloquially known a Cuddy’s ducks.

Indeed, Cuthbert is now regarded as the patron saint of Northern England. After his death he became one of the most important medieval saints of Northern England and, when his tomb was established at Durham Cathedral, a cult centered around it. 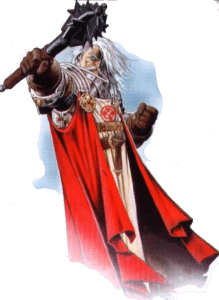 When the words ‘tomb’ and ‘cult’ are introduced, it immediately perks up the ears of D&D players. But Cuthbert’s influence on early D&D is even more interesting. When Cuthbert’s sarcophagus was opened a decade after his death, his body was found to have been perfectly preserved or “incorrupt,” as it would have been termed by the church.

Not only did this lead to the steady growth of Cuthbert’s posthumous cult following, but it brings to mind the D&D cleric spell Gentle Repose, a spell thought to also have its origins with Gygax’s interest in Saint Cuthbert.

Originally created for Gygax’s World of Greyhawk campaign setting, Saint Cuthbert isn’t well known in today’s D&D circles and we’re all the poorer for it.

In his Greyhawk origin story it was said that he had once been a mortal man, only to later become a deity. His alignment was typically interpreted as lawful good, as Saint Cuthbert hated evil and was a common foe of evil deities like Vecna.

I’d say that a caring, kind, selfless man who lived a life dedicated to fighting evil is a fine pick as the patron saint of D&D. So don’t be afraid to scrawl “Saint Cuthbert” onto that little line on your character sheet reserved for deity.

Now, read about a cleric with two bears, an origin story of the Cleric Class in OG D&D.

2018 Nerdie Award for Best Board Game

A Bald Cleric and Two Bears: The Origin of the Cleric Class in Dungeon and Dragons