Tactical Combat with Dragons: A Review of D&D Attack Wing

Some stories of the oddities of nature, while completely true, are almost too magically fantastical to believe. The yeti crab. The coelacanth. The, uh…raccoon? Raccoons are kind of weirdly smart the way they wash their paws and can break into stuff. I’m just sayin’. 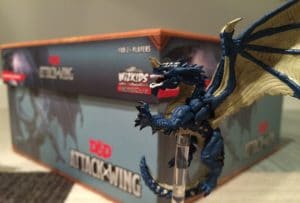 But this post isn’t about any of those animals. It’s about something even more magically fantastical…DRAGONS!

And DRAGONS BREATHE FIRE, which is awesome btw. [Editor’s Note: The theatre management would like to assure you there is no real fire, just the imaginary fire of the dragons, so please remain seated until we reach the end of this review of D&D Attack Wing.]

What is D&D Attack Wing?

D&D Attack Wing is a miniatures game. It’s the classic and beloved Dungeons and Dragons fantasy theme combined with tactical combat rules. Players plan their movement strategy with the included maneuver dials, then attack via custom dice and ability cards. I had a blast with the simple task of punching everything out and flipping through are the gorgeous cards. (And they are gorgeous. Well done art and design teams.)

D&D Attack Wing is played using modified rules from what is undoubtedly the most popular game of this type: Star Wars X-Wing. But even though they licensed X-Wing’s rules from Fantasy Flight Games, they made some modifications: Some good, some bad, and some not enough in my opinion.

What is very good is that D&D Attack Wing has rules for both arial and ground combat. Your dragons be soaring, then they be clawing ground troops. The set comes with red, blue, and copper dragons (more on these later), plus there is already a treasure trove full of expansions including ground troops like Sun Elves, Hobgoblins or Dwarven Ballistas. Most ground troop expansions are decidedly vanilla and rather than play with those uninteresting things, I’ll just have my dragons fight more. Dragonsdragonsdragons.

But while the modified FlightPath rules set is fundamentally solid and fun, and the option of arial and ground combat holds exciting potential if future expansions can up their game, I still somehow wish that Wizkids would have modified the ruleset in one significant way. I wish the game was played with 20-sdied dice instead of the custom 8-sided that are typical with games of this type. Playing anything D&D related but not rolling 20-sdie dice just felt wrong. It felt wrong.

Maybe it’s not a realistic expectation for D&D Attack Wing to use a d20 System, but I expect the products I buy to break boundaries. Such as the boundaries of reality. Sure, who cares if they tear open the fabric of space and time?! Not my problem! Give me magic! I want my wars with dragons to involve rolling a d20, and anything less that that feels like a disappointment to me. But enough about the game play.

I want to fix your thoughts on what is true, and honorable, and right, and pure, and lovely, and admirable. (A Bible reference?!?! Aw, snap, you just got Sunday-schooled, Earth Nerds!) 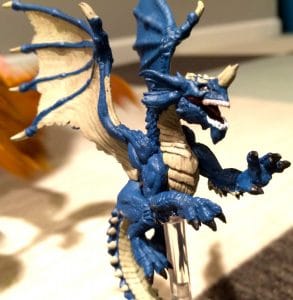 But it’s not hyperbole to say the included dragon miniatures are lovely, admirable plastic pieces fallen from heaven. I love those little suckers. The sculpts are amaze-balls, the coloring is incred-balls (Is that a word? Is amaze-balls even?), and it’s worth the price to just get the miniatures to display on your desk. They really are great. (Click any image to embiggen.)

The sculpts are the same of the dragons that come with D&D’s new Tyranny of Dragons miniatures line that accompanies their 5e launch. Since I already own several of the miniatures from the Tyanny of Dragons line, including a sweet green dragon, my hope is that Wizkids will release conversion kits that will allow you to use Tyanny of Dragons miniatures with the D&D Attack Wing game, but I know that’s a nerd’s dream and will never happen. Still, I’m stoked period and the D&D Attack Wing dragons will make nice additions to my 5e D&D role playing games. 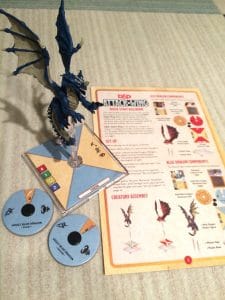 I realize that this review has drifted all over the place, but the fact of the matter is that the game and components contain so many possibilities that my nerd exuberance won’t let me not talk about it.

Another possibility of D&D Attack Wing is that I can envision a sweet mashup. Can you imagine taking the dragons from D&D Attack Wing and pitting them against a cluster of Tie Fighters from the Star Wars X-Wing game? I can. And you better believe I’m going to try it! Dragons certainly beat the Yuuzhan Vong and even if it would create wonky game play, it would be worth it for the nerdy awesomeness of D&D versus Star Wars.

I was hard on the game play because it’s not ideal. But that’s not to say it’s bad. The game play is soldiered overall very fun. The arial and ground rules is a nice touch and the FlightPath system is becoming a modern day classic for tabletop gaming.

The components are bright, well crafted, and full of creativity. You have spell cards, breath weapon cards, and more. What’s not to like in that?