7 Controversial Thunderbolts from the Comics

Luke Motherefffin’ Cage was the hook that got me into the Thunderbolts comics. I love how Bendis revitalized that character.

Then, beginning with issue #144 (2010), writer Jeff Parker introduced Luke Cage as the new leader of the controversial Thunderbolts, a team formed from some of the most dangerous supervillains, now working together on the side of angels as a means of rehabilitation and contribution to society.

The great thing about the Thunderbolts comics is that it is always full of drama, particularly of the good ‘ole infighting variety. The Thunderbolts are a team of self-serving maniacal villains – some actually trying to find redemption, others being forced to be do-gooders under duress, and still others who have all sorts of secret agendas that even Benedict Cumberbatch couldn’t unravel. So drama is sure to follow.

For my team of Top 7 Thunderbolts, I wanted to really dial that drama up as high as I could. So instead of starting at their power set, I searched through the list to find the characters who had the most difficult or damaged backstories, coupled with a personality that was sure to grate on teammates.

As I was building my team I noticed my first 3 selections happened to be all female and I thought that provided me an opportunity to have some fun as I rounded out my 7.

So imagine my Thunderbolts team as a sorority house with Luke Cage acting as their Resident Advisor. 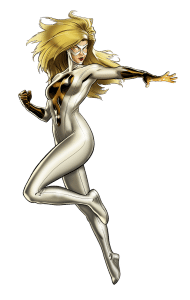 Moonstone – real name Dr. Karla Sofen – was the child of Karl Sofen, butler of a famous Hollywood producer. After the death of her father, Karla’s mother worked 3 jobs to put Karla through college.  Shockingly, Karla rebuffed her mother, disgusted that her mother would put another person’s needs before her own.

Becoming a successful psychiatrist, Karla learned of the original Moonstone, became his psychologist, and manipulated him into rejecting the source of his powers [an extraterrestrial gem], which she then absorbed to gain the powers of Moonstone.

It gets much creepier. During Sofen’s career as a psychologist, she convinced depressed patients to kill themselves while she watched. She’s well-known to use her psychiatric techniques to sexually seduce both teammates and enemies, all for her personal schemes and agendas. Then, shortly before becoming a Thunderbolt, Karla murdered her mother Marion by suffocating her, then set her house on fire.

You think she might add a little drama to any Thunderbolt team?

Moonstone’s powers are derived from a Kree energy stone, which is bonded to her nervous system.

The stone both allows her to fly and to become intangible so as to pass through solid objects. She can project energy beams from her hands as well as discharge light in a blinding flash. Finally, her bond with the Kree stone grants her superhuman strength, stamina, speed and reflexes. 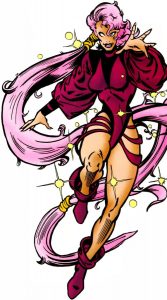 Speaking of bad news, Abigail Wright might be an alien, an angel, or a woman who gained her powers through radiation treatments to save her from brain cancer. But she considers herself on a mission of “mercy” to “help” the hopeless who don’t have the strength to commit suicide, believing she is doing them a kind act.

Created by Peter David in his fantastic run on The Incredible Hulk, Mercy has a funky power set. She has the power of:

“Angel of Mercy”, as she is sometimes known, most recently appears as one of Red Hulk’s recruits for his new black ops incarnation of the Marvel NOW! Thunderbolts, although she might be stranded in Hell now. I think. IDK, comics are confusing. 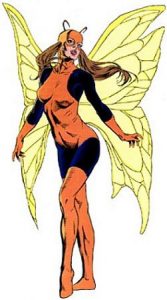 Speaking of confusing, the next member of my Thunderbolts team of 7 has gone by Sybarite and Skein, but I’m sticking with my favorite of her names – Gypsy Moth.

Sybil Dvorak was raised by Gypsies. As her mutant powers began to manifest, she loved how the sensation of soft fibers – such as soft fabrics and flowers – felt to her mental touch. Somehow she wandered onto the set of a Dracula movie (don’t ask me) and was seduced by the star, only to become a prisoner in his house.

She wove herself a costume using her powers, began calling herself Gypsy Moth, and directed her feelings of anger and betrayal by attacking Hollywood social gatherings. Later, when she came into wealth, she took on the name of Sybarite and used these new assets to start a hedonistic cult, paying her followers illegal drugs in return for soft garments and animal bodies, which they collected for her.

Later, Gypsy Moth joined Hawkeye’s Thunderbolts team simply to try and seduce Songbird, designed a new costume for herself and changed her name to Skein.

I’m sticking with the name Gypsy Moth though, because dang if I know what Skein or Sybarite mean.

Gypsy Moth has the ability to telekinetically manipulate materials and objects with her mind. She focuses on “soft” substances like fibers or the organic tissue of plants and animals, going as far as having an aversion to mentally touching anything hard or solid.

Because comics are weirdly inconsistent, Gypsy Moth has wings that are either woven using her telekinetic power or growing out of slits in her back. 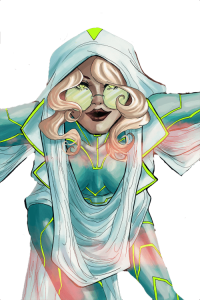 June Covington was a bored postgrad student who began doing genetic testing on herself. She later met a biologist, Edward Wynne, who had a birth defect on his arm. When she approached him about genetic manipulation, he rejected her methods, so she injected him with her genetic cocktail, paralyzing him.

Later, she induced cranial failure on 18 people during a prayer meeting for special needs children. She was rightly imprisoned, only to meet Norman Osborn behind bars, become his doctor and become romantically involved with him.

In other words, she’s perfect for this team of Thunderbolts.

Toxic Doxie developed Genetic Plug-in technology, giving her powers such as antiseptic breath, bones that soften to diffuse impact, and glands that distribute megadoses of Relaxin to allow her joints to dislocate with ease.

I want to quickly check in before we go any further. Who thinks Luke Cage can mange this sorority house full of drama queens? Well, let’s pile on a few more.

Satana is half-demon and the sister of Daimon Hellstrom, the Son of Satan. Satana studied magic under her father and is also a succubus, draining the souls of men.

She also…you know what?  Demon / Satan / succubus…that’s all you need to know to realize her backstory is as messed up as they get.

Satana has some innate mystical abilities inherited from her father, as well as some granted to her by him. As a succubus, Satana is able to extract and feed upon the souls of human males, hypnotizing and psionically controlling her victims in order to increase her abilities and magical power.

She can manipulate magical forces for a variety of effects, including teleportation, levitation, and projecting eldritch force bolts.

Finally, Satana has superhuman strength and is trained in the mystic arts, knowing how to cast spells and perform witchcraft. 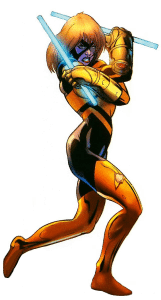 Let’s take a break from crazy backstories for a moment and look at Joystick, whom little was known about before she appeared as Joystick. But being that she is sometimes known as “the living embodiment of action”, I thought she’d be perfect to add to the action of my already complicated team.

We do know that she began life as Janice Yanizeski, a student at the University of Arizona. Her gambling father taught her that she should ‘always have a card to play’. Then during her sophomore year, something happened, apparently resulting in a near death experience.  As a result, she became determined to live life on the edge, taking extreme risks. Next thing you know, she’s reappearing as Joystick, with powers.

She also wears strontium powered metal devices on her wrists, each of which generates a “baton” of energy. The batons can be swung or hurled with great concussive force and, in addition, striking the batons against one another projects a powerful concussive force beam at a target. 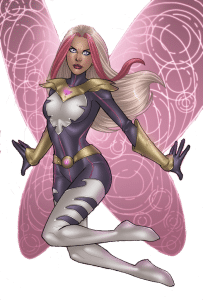 Melissa Gold had a mother in prison and an alcoholic father, so she felt her only option was to run away. She developed a tough edge on the streets and begin to refer to herself a Mimi.

Eventually imprisoned, she met a female wrestler who invited her to join the Grapplers, a team known for their colorful personalities and ringside antics, but but denied the opportunities of their male counterparts. So the group earned some extra money via Roxxon Oil, who gave them special equipment to assist in their shady missions.

Mimi received an apparatus that converted her voice to high-frequency sonics and was later approached by Baron Zemo to join the Masters of Evil, villains who were the first to pose as the Thunderbolts and where she adopted the mantle of Songbird.

Songbird’s vocal cords were bionically enhanced by Roxxon. She gained the ability to generate earth-shattering supersonic screams of great volume and for a variety of effects. Songbird has perfect pitch, hearing the correct frequency for every musical note on the scale. Every individual note she screams induces a different effect upon those who hear it.

She uses a derivation of technology created by the criminal Ulysses Klaw that converts sound into energy that has physical form and mass: “solid sound”. She has learned to create complex forms and shapes, animating them by mental command.

She can “fly” by generating sound “wings” and has also shown an ability to influence others through sub-sonics, giving them sonic “nudge.”

Few on this list would be selected for a Thunderbolts “best-of” list. In fact, many of them you may not have even heard of and served for only a very short time.

But I dare you to find a Thunderbolts team with more inner demons, conflicting agendas, and interpersonal shenanigans. That provides a lot of opportunity for drama, and that’s a comic I’d read.

Catching Up on the Characters from Agents of SHIELD