Black Tooth McPhee stepped from the jolly boat, the shallow salt water seeped into his left boot through the holes, the wooden stump of his right leg sank slowly into the sand. With his one good eye he surveyed the line of trees about twenty yards away while his parrot, Peggy, who was perched upon his shoulder pecked at the cord which held the patch over his other eye. With the hook on his hand McPhee pushed Peggy away, so she took instead to biting his earring.

“Aaargh,” he said after a quick glance over his shoulder at his galleon moored in the harbour, “this be a fine place for the buryin’ of me treasures.” 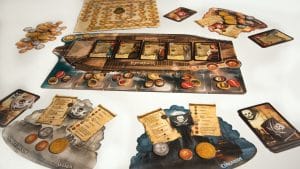 In Libertalia, players take on the role of pirates who be vying to get the most treasure from plundered ships.  Using cards, players employ the services of the same crewmembers to get the best booty each day. At the end of 3 rounds, players will total up their plunder and the player with the most doubloons in the bank wins the game!

Libertalia is about pirates and plunder, with a dash of trickery and knavery as well. At its core it is a card game. But it does have other bits as well, including a tiny pirate board and a heap of booty tokens.

Gameplay is 3 rounds. At the start of each round, players are given an identical set of character cards that represent the crew of the ship – 9 cards to start the game and then 6 more cards at the start of rounds 2 and 3.  Each of these character cards has a special ability that affects the game. Each player also starts with 10 doubloons, and throughout the course of the game, players will try to gain more doubloons by plundering. Jewels, rum, and even treasure maps are up for grabs!

When deciding between which crew member to play there is always room for bluffing and clever play, so the game is full of surprises and it’s not uncommon for hoots and groans to erupt around the table because players can never know with 100% certainty which card other players will lay down.

The pirate theme is woven throughout the game. The artwork, the cardboard doubloons, the booty tokens, the boat–it’s all fantastic. The box recommends 14+, but it’s a lighter game that younger kids can get a handle on, provided you think they can handle some artwork that depicts the occasional bloody pirate. 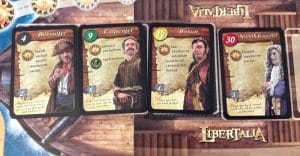 Libertalia is perfect for new gamers in your group because it can be picked up quickly. The main concept of Libertalia can be learned in mere minutes and, since every crewmate’s special ability is written right on their card, you can learn them as you go.

But it’s fun for more serious gamers as well. Should you play the Brute who knocks the highest ranked cremate off the ship or the Barkeep who earns you money every turn? Once the game begins that element of strategy has you concocting plot after plot…until another player plays a card you weren’t expecting and throws off your entire strategy, that is.

I love pirates, so it serves to reason that I’d love Libertalia. But I think you’ll love it too, because in addition to its great theme, it’s a great game as well. It’s available via Amazon for a nice price, and I highly encourage you to give it a look. Your gaming group will appoint you Captain if you do.

And I’m not the only one who loves Libertalia. It was featured on an episode of Tabletop and you could tell the players were having a great time. So watch the video below and let Wil Wheaton, Seth Green (of Buffy the Vampire Slayer and Robot Chicken fame), and Karen Gillan (of Doctor Who and Guardians of the Galaxy fame) entertain you as they teach you how to play.

Weekly Nerd Chat: Who is your favorite sidekick and why?

What’s the Big Deal With Cannibalism in Popular Culture?

Board Game Review: Appease the Forever King with Charterstone