Friday 5 collects five of the week’s biggest news items from geek culture. Each Friday we’ll relay the latest trailers, biggest casting news, and nerd culture’s most important stories of the week. Let’s get right to it, shall we?

Nerd Culture Highlights for the Week of April 17, 2016 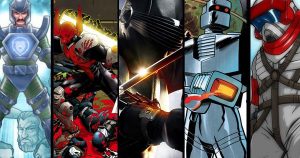 But when you click the link above and see crazy amount of talent they have lined up for ti, you realize that they are very serious. Look for Target to be selling brand new version of our favorite 80s toys very soon.

2. The Walking Dead Has Made Way for Many Others 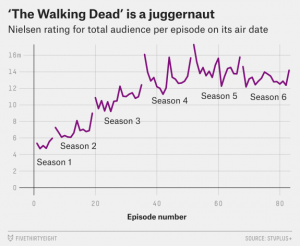 Nate Silver has long been a nerd’s nerd. His statistical genius first was exhibited in sports like baseball and basketball, before he then turned his attention towards building accurate statistical models for predicting political races.

But his website, Five Thirty Eight, has great data graphs for topics dear to nerds. This week they graphically presented just what a standout hit The Walking Dead has been on TV, and how that success actually paved the way for more nerdy comics and TV.

Play footage for upcoming video games is nothing new, but as Game Tyrant exclaimed, the new 12 minutes of footage from No Man’s Sky will “blow your mind.” Well, mind blown.

Captain America is perfect, right? Well, he has a flaw that has long been explored here and there in the comics, but this Youtuber has excellently encapsulated into a 3-minute video.

Give it a look and see if it changes how you view Cap.

5. How to Colonize the Galaxy

Let’s finish by thinking big. We all love our science fiction and think of the stars, but have you ever wondered what it would take to actually colonize those stars. Well, this video provides a step-by-step.

A lot of good links were cut this week (D&D in the Times and Marvel/DC Analogs, to name just a couple), which just goes to prove what a great time it is to be a nerd.

A Brief History of the Atomic Knights, Part I

Why James Gunn and DC’s Upcoming ‘Gods and…

Comic Haul: Shipping Comics for Cheap Plus Avengers and DC…