I’m secure enough (barely) to admit that I’ve tight-rolled my acid-washed jeans, worn neon, and had a period in there where I was sporting spikey hair. It’s not only that I have fond memories of the 80s, I thought the 80s were totally rad.

Furthermore, the toy lines of the 1980s were gnarly and many would argue that they were some of the all-time best.

For this list I’ll only be choosing 7 toy lines, but there are a TON to choose from, so I’ll only be able to skim the…well, not the cream. What’s under the cream? Is it cheese? Let’s just say it’s the cheese because many of these will seem super-cheesy to today’s nerd. 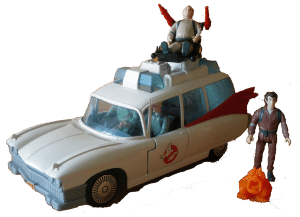 The Real Ghostbusters was a toy line from Kenner and it was crazy popular. First came the 1984 film, then came the 1986 animated series, which was realized alongside the toy line.

As many toy lines do, they start by closely mimicking the cartoons in an attempt to be faithful to the source material, but then they often drift into wholly original costumes and characters. This was the case with The Real Ghostbusters, but I lost interest in the toys quickly after the core characters and Slimer.

The core character included Peter Venkman, of course, as well as Ray, Egon, and Winston. Then there was Slimer, the green ghost, and Ecto-1, their pimped out ride. Great 80s toys and a fun cartoon. 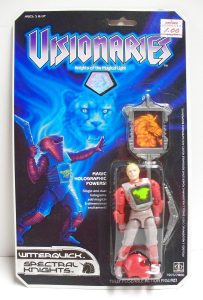 Visionaries was a line of action figures from Hasbro, which was released in 1987 and didn’t even make it to a full 15 minutes of fame before it was cancelled. But I was heavy into D&D at the time and thought I would be a wizard when I grew up, so it was awesome to me.

The story was set on a planet where all electronics winked out, so the people were forced to rely on old school magic. The Visionaries were two groups of knights who were invited to a competition by the wizard, Merklynn.

Yeah, it was some trippy dippy stuff, so it’s no wonder the Marvel comic only lasted a few issues and the companion cartoon only lasted about 13 episodes.

I thought it was totally rad though, particularly because all the action figures had a hologram sticker (long before Marvel comics beat that idea to death in 90s comics).

It was really only the 1st generation of Transformers that were produced in the 80s, and even those toys jumped the shark quicker that even a Michael Bay sequel.

The charm of 80s Transformers – in my opinion – was that they were ordinary vehicles that transformed into robots. A toy line that began as a semi-truck, a beetle bug, a Porsche, or a jet which transformed into robots was quickly replaced by Beasts and Dinos and crazy, funky nonsense so much so that I soured on the toy line pretty quickly.

But, those first few Transformers from the 1st generation – Bumblebee, Optimus, Megatron, Prowl, Jazz, and Starscream – were so rad that Transformers had to make my list of awesome.

What was also great was that the animated movie and the cartoon series were such a big deal (good golly, Saturday cartoons were the best) that Transformers were just a whole cultural thing, man. I can even remember a kid – Jamal – who sat next to me in Jr. High and would spend most of his class time creating and folding the most elaborate paper Transformers. And they really worked! Jamal was without a doubt the nerdiest kid in school, but I thought he was awesome.

#4 He-Man: Masters of the Universe

This may be incorrect information and I just typed it on the internet, but I’m pretty sure that the He-Man: Masters of the Universe toy line came first, only to be followed by the cartoon. That would make it the 1st cartoon based on a toy. But the toy line was ridiculously successful, so much so that it spawned the rival Thundercats line, which should’ve been named the Copycats.

He-man was an interesting toy line in that all the figures – except Orko, Teela, and Evil Lynn – had the same body type, which both gave them all the jacked-up Schwarzenegger look, but also made them cheap to produce, since they shared the same mold.

I had all of the figures: He-Man, Skeleton, Battle Cat, Man-At-Arms, Stratos, Beast Man, Trap Jaw, Tri-Klops, Whiplash, and Dolph Lundgren. Of course, I’d have them all battle it out in Castle Greyskull. 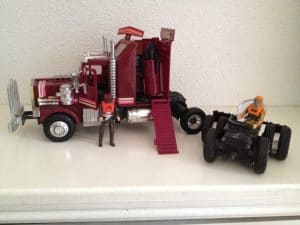 The inclusion of MASK on a list of best toy lines from the 80s might surprise a few folks as it’s not as recognizable as some of the others, even though it was also associated with a cartoon. But MASK was totally rad, man.

First, it included trucks like the Rhino, which was a tractor Rig that turned into a Mobile Defense Unit with a battering ram bumper, smokestack cannons, an ejector seat, a rocket launcher, and a removable ATV. It was awesome.

Second, the driver – just the the Rhino itself – did a switcheroo of his own, as each driver had a “mask” that endowed him with 80s awesomeness.

This was because MASK stood for Mobile Armored Strike Command – where vehicles and men became an awesome fighting force to wage battle against VENOM, the Vicious, Evil Network Of Mayhem. Why? Well, as the box said: “Illusion is the ultimate weapon.” The 80s, man. Gotta love the 80s, man.

Their base was called Boulder Hill and other vehicles included the Condor (a motorcycle), Firecracker (a pickup), Gator (a jeep), Switchblade (a helicopter), and Thunderhawk (a Camaro).

I LOVED those toys and wish I still had my MASK collection. 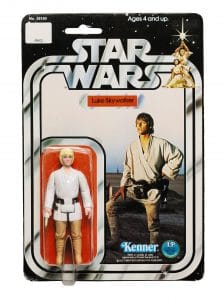 I still have my Star Wars collection to this day as I’d certainly count Star Wars as my runaway #1 nerdy obsession.

Part of my 80s Star Wars action figure collection includes 42 Stormtroopers because I felt like I needed that many. I also have at least a dozen Tusken Raiders and twice that many jawas, and as I am typing this, it occurs to me that I must have some sort of thing for Tatooine.

Of course, I have Han and Chewie and Leia and Yoda and Luke, but everybody had those. The Star Wars I was most proud of was my collection of Bounty Hunters, no matter how obscure they are. Ive never collected an actual bounty, but I love those figures.

You might think it odd for me to admit my #1 nerdy obsession is Star Wars, yet list them as#2 on my list. To explain why GI Joe ranks #1 on my 80s toy list, you’ll need to indulge me in a little bit of an over-share.

I’m an only child raised by a single mom. In order to provide for me, I can remember my mom working multiple jobs, one being in retail, managing the toy section of a department store. Using her employee discount, my mom would bring me GI Joe figures all the time.

I had over 124 GI Joe figures, including some of the obscure ones like Chuckles, up to some of the sweet vehicles and play sets.

In addition to loving the cartoon, I’d spend 5-6 hours at a time, alone in my room, setting up elaborate battle scenes. GI Joe more than anything else serves as a touchstone for my childhood. Sure, Snake Eyes was supposed to be the hero, but I really thought it was my mom who worked hard to bring me home some really cool toys.