Dragon Magazine 144 and How to Cheat in your RPG

Before there was this wondrous thing we call the internet (Stay with me Millennials!), you had limited places to turn when you wanted to really nerd out. One of those places if you were an RPG loving fan was Dragon Magazine.

Dragon Magazine was published by TSR, the company that published games like Dungeons and Dragons and Marvel Superheroes game, as well as many others. And Dragon was a way for them to both publicize those games as well as update them.

I first got into the magazine because they were publishing the FASERIP scores of new Marvel heroes, so there was definite answer to how much damage Speedball could really do in our campaign.

Dragon was published from the late 1970s all the way to 2007, when it transitioned it to an online only magazine until 2013. I loved it and because the internet is truly wondrous, the magazine is archived for us all on the internet in various ways.

Dragon Magazine 144 and How to Cheat in your RPG 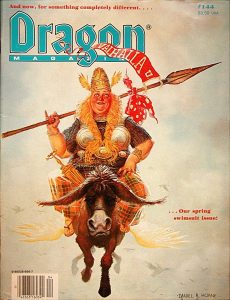 And if you want to check out one issue in particular, I nominate Dragon Magazine #144, which was published in April 1989.

Why issue #144? Because it had two articles that blew my young adolescent mind: they published 2 articles on how to cheat, on page 20 of the magazine and page 22 on the scan.

Playing RPGs and cheating are time honored connectors and I would argue your stance on the issue reveals your true D&D alignment. And I am clearly chaotic good. Maybe. Because if there was one thing I was guilty of, it was falling in love with my characters and doing anything and everything I could for them to succeed.

And when I found Dragon Magazine 144, I got really good at it.

For starters, one of the articles talked about loading dice and I learned how to do it. I had some d6s that became coveted among my party, as they nearly always would roll 5s and 6s, which over the course of a campaign really can add up. We became much more effective once I worked out how to shave the right spots with some sand paper.

But, I also sought my vengeance when I was crossed. I remember when a friend roll playing paladin abandoned one of my favorite characters to die just to save his own hide. It felt so out of character that I had to do something.

So, I “accidentally” borrowed his favorite d20, and when I returned it, it suddenly had a weird tendency to crit fail. Many, many times. I was never abandoned again. By anyone in my party. And I did replace his die with one that was slightly advantageous. Eventually.

Just the fact that they would publish something on cheating was outstanding. It really validated the part of me that was willing to do whatever it took to succeed. I am sure now that if I looked there are probably whole blog posts built on the same ideas that are just out there for people to find and give their DMs nightmares. (Even writing this article I am thinking about having the nerds in my office to 3D print some weighted dice and start my new collection as I get ready for my first D&D campaign in several years.)

And if you never have read Dragon, this is a great issue to check out and look at for some nostalgia. You can see long forgotten but loved games like Top Secret SI, the Teenage Mutant Ninja Turtles game by Palladium and the ads from small shops and conventions all over the country. And make sure you stay for the end, where there are pages of some very nerdy comic jokes about being an RPG gamer.

Postscript: If you are looking for some dice that roll sure, try these.

An Introduction to Skullkickers, a Great Fantasy Themed Comic by Jim Zub

DM Tools You Should Use: Stat Trackers