While prepping to DM The Curse of Strahd, I was directed by the manual to do a sort of tarot card reading with what is called the Tarokka Deck. This is a pretty cool mechanic for the adventure because the cards determine the location of Strahd, the placement of three important treasures that can be used against Strahd, and the identity of a powerful ally.

In other words, this little card reading mixes things up – allowing for a little variety each time you play or DM it. (Here’s our review of Curse of Strahd btw.) 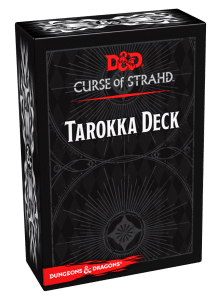 where’s the fun in that?!  Maybe this would work just fine for the first reading (the one you do behind the scenes as the DM), but if the characters ask for a reading in-game, a standard deck would be kinda lackluster.

Trust me: It’ll be much cooler to whip out the actual Tarokka Deck as you role-play Madam Eva and perform the fateful reading.

I gotta be honest, though: I was a little hesitant to pull the $10 trigger on the Tarokka Deck for a three minute reading. Sure, it would be cool and all for those three minutes, but what about thereafter? Is the Tarokka Deck doomed to collect dust until the next time I’m called upon to DM Strahd?

Not necessarily. The deck comes with a set of rules for a game called Prophet’s Gambit, and that has made all the difference.

I don’t want to mislead you from the start: Prophet’s Gambit is very, very similar to Texas Hold’em poker. And to WotC’s credit, they seem very forward with that fact, as well. Prophet’s Gambit is a dolled up Hold’em, but that certainly is a) no knock against it and b) not all that it is.

A card is played face up in the center of the table (the Focus card) and each player then gets a face down card of their own that they are welcome to look at as often as necessary (their Fate card).  Beginning with a hand of six cards, players are challenged to hold the strongest hand after two rounds of discards and plays.

If you’re familiar with the winning hands in poker, you know exactly what you’re shooting for:

Before play officially begins, each player chooses a card from their hand and plays it face up in front of them. Whoever has the highest numbered card goes first and has the option to trash the Fate card and replace it with another.

On his or her turn, players have two options: Play or Discard.

If they play a card, it goes face up overtop the card they played to determine play order. If it is higher than the card lying face up before the person to their right, that’s the end of their turn. However, if it is lower, then the player can then draw from the Common Deck and then must discard a card of their choice. Playing what is called a Master Card (the Tarokka Deck’s version of a face card) will accomplish the same.

If the player chooses to straight up discard a card from their hand, they then draw from the Master Deck. And this is where the fun begins! These cards cause all sorts of chaos.

Some of them affect only you (such as drawing extra cards or discarding your entire hand and replacing it from the Common Deck), but others wreak havoc on others (permitting you to look at another player’s hand and forcing them to discard a card of your choice, rotating Fate cards, etc).

Find yourself with a hand that feels unsalvageable? Discard a card and leave your fate to the High Deck!

I, for one, am pleased that the Tarokka Deck pulls double duty. I think that is a smart play on behalf of WotC, even if the resulting secondary function is essentially a dolled up Texas Hold’em with a DnD twist.

The similarity to Hold’em made the game relatively easy to pick up, too. The first round I played with friends dragged a bit as we made sure we understood the mechanics and rules, but the subsequent rounds flowed easily enough…that is until the High Deck cards wreaked their fortuitous havoc on our hands!

You can get a copy of the Tarokka Deck here, giving you two games in one.