By Clave Jones On Jun 3, 2016 Last updated May 23, 2016
Share TwitterReddItPinterestFacebookEmailPrint

In 7th grade there was a kid in my class named Jamal. He would spend every spare moment making paper Transformers.

And let me be clear: those paper Transformers really transformed. Scissors, paperclip joints, complex folds…they were a work of art to a nerd like me.

Alas, a lot of the other kids really picked on Jamal. Admittedly, Jamal was pretty quirky. But I thought he was rad. 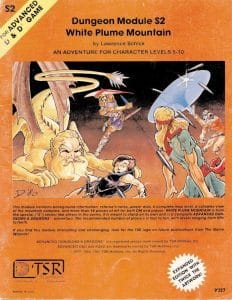 In 1979 TSR released an adventure for Advanced Dungeons and Dragons. It was written by Lawrence Schick, coded as S2 (“S” stood for “special”), was designed for characters levels 5-10, and originally came in at only 12 pages, but was shortly thereafter expanded to 16.

It was called White Plume Mountain, and it was pretty quirky. But I thought it was rad.

White Plume Mountain went a little something like this: PCs are hired to crawl through a dungeon in order to retrieve three magical weapons: a trident (named Wave), a warhammer (Whelm), and a sword (Blackrazor), each possessing its own intelligence.

There is poetry involved (I said it was quirky) by the great wizard Kereptis who introduces PCs to White Plume Mountain. Keraptis descended into the volcanic mountain eons ago accompanied by a bunch of gnomes, as eccentric wizards are apt to do.

The adventure is structured like a giant lair, and is divided into 27 encounters throughout the 16-page module. The individual encounters are where the quirkiness really bubbles to the surface.

In encounter 17, for example, characters find themselves in a giant bubble suspended above a boiling lake. The players need to defeat a giant crab in order retrieve Wave without damaging the fragile bubble and falling their doom.

Encounter 27 features an ogre mage who possess Blackrazor, a blatant rip-off of Elric’s Stormbringer. Encounter seven requires characters to jump from platform to platform to evade erupting geysers, which only leads them to a room of permanent darkness where a vampire guards Whelm. 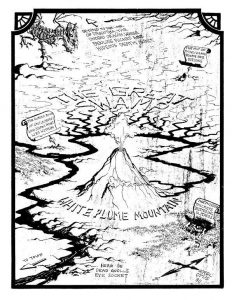 Other encounters feature giant scorpions, slippery oil, traps that require a 10 foot pole, and a guard named Burket who has taken a lycanthrope sorceress as his lover.

If this all sounds like a collection of mismatched stuff that a 13-year-old would toss together because he wanted all the most fun things to be in one dungeon together, then you’ve judged White Plume Mountain exactly correctly.

Adventures nowadays are expected to grounded in a sense of logical and structural realism, despite the obvious fantasy trappings. When reading White Plume Mountain today you can almost hear the gears of the internet grinding as 1000 nerds simultaneously post their “um, actuallys.”

Listen, I know that encounter 24 doesn’t explicitly account for where the villainous Sir Bluto would procure his provisions and that White Plume Mountain has no bathrooms. All I know is that I suspended by disbelief when Bluto ambushed our kayak as it burst out of of the reverse gravity water tube that flows seemingly in mid air, because magic rivers are awesome.

Likewise, I know that a giant crab would not populate the same habitat as a manticore, but I’m trying to have a little fun here, and by gosh, White Plume Mountain pours on the fun, even if the whole thing doesn’t make a lick of logical sense.

Remember, I said that White Plume Mountain was quirky, but darned if it’s not rad.

And the fact that White Plume Mountain doesn’t make sense actually makes a lot of sense if you know its history. When Lawrence Schick wrote the thing he was auditioning for a job at TSR. So he wanted to show off his best ideas, even if he crammed every single one of them into the same adventure. 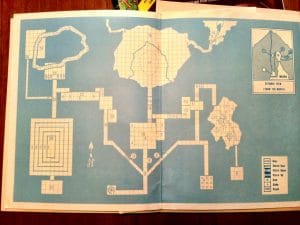 Schick didn’t realize that TSR would hire him and publish the module without making any changes. Looking back on it, Schick admitted that White Plume Mountain was “really just a sampler of clever ideas that were never fully fleshed out.”

Added Schick: “The central conceit of White Plume Mountain was a ‘funhouse’ dungeon full of tricky obstacles designed to challenge adventurers for the amusement of a mad wizard.”

The whole thing reminds me of the classic villain, Arcade, who would lure the X-Men into his giant Murderworld. (I take every opportunity I get to work in 80s X-Men comic references wherever I can.)

Undeniably a classic, and frequently on top D&D modules of all time lists, White Plume Mountain got some extra love over the years. It was reprinted in 1999 to celebrate the 25th anniversary of Dungeons & Dragons. Wizards of the Coast also released a sequel to the adventure in 1999, Return to White Plume Mountain, the events of which are assumed to take place 20 years later than the original. Finally, in 2005, an online version of the adventure was released as a free download, updated to conform with 3.5 rules.

White Plume Mountain was over-the-top fun, and we all need a healthy dose of that type of silliness in our lives. Even the art by Erol Otus and David C. Sutherland had a sense of disproportion and goofiness to it.

We need more geeky stuff like White Plume Mountain, just like we need more quirky kids like Jamal, who was just the nerdy type of kid that would love solving the puzzles thrown at him by the crazy wizard Keraptis.

Speaking of Keraptis, he doesn’t go away easily at the end of the module, and he certainly isn’t going to let go his of precious 3 weapons. In fact, players might have to bribe a Dungeon Master to get to keep those things. 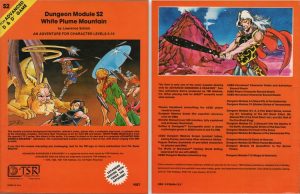 And I think you should bribe your Dungeon Master this weekend. White Plume Mountain would make for a great one-or-two-off gaming session, and it wouldn’t be tricky at all to update White Plume Mountain to 5e, considering that the adventure never really concerned itself around issues of balance.

Picking up a old edition is pretty easy actually. Noble Knight specializes in classic RPGs, and you can even get a collectible 1st printing. Noble Knight also has the Anniversary Edition or the sequel, Return to White Plume Mountain.

Regardless of what you do, have fun with D&D. Dungeons and Dragons is a game, and games are meant to be fun. White Plume Mountain understood this and brought a whole mountain of fun.

Friday 5: Nerd Culture Highlights of the Week of May 29