Friday 5: Nerd Culture Highlights of the Week of May 29

Friday 5 collects links and videos spanning all of nerd culture – sharing bits of news, fun, and other noteworthy offerings that you might have missed in the hustle and bustle of the week.

This week could very easily be tabletop roleplaying game only, as the two titans, Dungeons & Dragons and Pathfinder, the Marvel and DC of RPGs, both made huge announcements about upcoming products. So let’s jump in

1. Pathfinder announces a slew of new books and OH YEAH A RPG SET IN SPACE!

At their annual Paizocon, Paizo took the opportunity to announce a murderers row of new books and products for the Pathfinder RPG, including a Lovecraftian adventure and also one that features hobgoblins, making it a solid, down-to-earth adventure. Goodness, it was so much more, so check out a recap post here.

And they also announced Starfinder, a wholly new RPG that is set in space, but backward compatible with Pathfinder. Get your Starfinder details here.

Not to be outdone, Dungeons & Dragons announced a slew of new products as well, using a live party at Meltdown comics to hype it up.

The key announcement was two new books, a sort of half monster manual, half setting guide, and a brand new adventure that features giants, which us Earth Nerds were happy to see because we 100% predicted and called it last year.

There was more, including some live play, but you’ll have to check out the video: 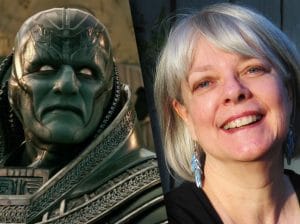 As a huge fan of Louise Simonsson back in the day, I was pleased to see the above story on Vulture. Take a couple minutes to learn about one of the creators who was so influential in many of the comic characters we love.

4. Brie Larson is the Frontrunner for Marvel’s Captain Marvel Movie

Normally we wouldn’t share a rumor, even if it is pretty substantiated, but this one is too good to pass up. Word is that Brie Larson, an Oscar-winning actress for the part of Carol Danvers.

I hope this is true, considering it would mean that Marvel is looking for an actress with incredible ability. Click the link above for the full story.

You know what, let’s end this with 4 minutes of counting the number of kills Wolverine has had in the movies. That feels wholesome and fun, right?

A Brief History of the Atomic Knights, Part IV