Welcome back to our series covering the life of Sir Walter Ralegh—poet, soldier, scholar, bard, and companion to royalty. Our first part covered Ralegh’s younger years, education, and introduction to war. Let’s pick up our bard’s story on the streets of London…

But, seriously, read that first part before you go any further. I’ll wait.

An Adventuring Bard: The Life of Sir Walter Ralegh, Part 2

After seeing combat in the Huguenot wars in France and a brief sojourn at Oxford as a teenager, by 1575 we find young Ralegh living in London at the Inns of Court in the company of “boisterous blades, but general those that had wit.”

Though he would never set foot in a college again, Walter continued to learn everything he could; in spite of later rumors of a misspent youth, he spent his obscurity building a foundation for the reputation he would gain at the royal court for intelligence, bravery, and surprising artistic tendencies.

Ralegh’s earliest extant poetry dates from this period of relative inactivity. This time was not wasted, however—the accumulated experience and education of his twenties prepared Ralegh for his future ascent through English society.

With the family wealth growing alarmingly thin, Ralegh and his older half-brother Sir Humphrey Gilbert conceived of a get-rich-quick scheme that appealed to their shared sense of adventure: a journey to find the mythical Northwest Passage to China in 1578.

Christopher Columbus and subsequent European explorers had failed to find a single, short, and efficient path to Asia, but in a disarming display of familial pride, Walter and Sir Humphrey thought they could succeed where others had failed.

The expedition was a complete failure, beset by vicious storms, Spaniards, and disease. In a desperate effort to fight off scurvy among the crews, the brothers relieved a Seville trader of his oranges and lemons and were promptly fined for privateering upon arrival back in England. This episode marks Ralegh’s first entry into the Council Book (basically the royal court’s official records) and negated any lawful good alignment the bard hoped to have.

Later in life his enemies would remark that such illegal, morally dubious actions were par for the course, but high-minded judgments like these ignore personality traits that already define the young man and would determine his path through the world—a stubbornness bordering on mule-headedness; a dedication to those under his command; a seemingly careless disregard for those above his station; and, most of all, a genuine lust for action and adventure. Sounds exactly like a D&D character to me.

Sir Humphrey’s connections at court enabled his younger brother to receive a captain’s commission and one hundred men to put down rebellion in Ireland in 1580. The Catholic Irish, backed and encouraged by Britain’s dogged enemy Spain, nipped and bled the English in irregular warfare. The guerilla fighting was frustrating, and encounters with the enemy ephemeral and brief in the extreme.

Ralegh chose to quote 1 Corinthians 9:26 to describe this warfare, writing it was like trying to “fight as one beating the air.” Aggravated by the lack of regular fighting, he fought savagely when his men met the Irish in combat and drew praise for his strategies. Contemporary accounts of his actions reveal immense courage and intense personal devotion among his soldiers. It was a high CR encounter, but Walter rolled well.

After the Siege of Smerwick in November 1580, Arthur Grey, Baron Grey de Wilton, ordered Capt. Ralegh to execute some 500 or 600 Catholic prisoners who had surrendered. Ralegh and his troops carried out the massacre, though the brutal slaughter of surrendered troops made him infamous and would later be used against him in the trial for his life. 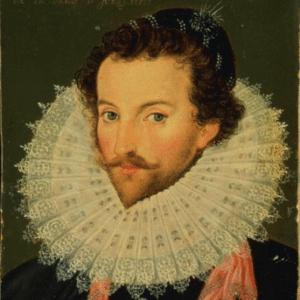 Ralegh chafed under Lord Grey’s command, whose apparent lack of strategic talents he felt qualified to criticize in letters written to Queen Elizabeth’s court. Either unaware or uncaring of the danger in disparaging a member of the British peerage, Ralegh was not afraid to let his friends at court know he thought a mere captaincy beneath his dignity.

He removed to England in 1581 at the request of the Queen herself. It is worth noting for later that Lord Grey was not unhappy to see him go, saying, “For mine own part, I must be plain: I neither like his carriage nor his company.”

Here we find Ralegh entering the first great door of his life, one that will lead to riches and adventures only previously imaginable in dreams. He was about to level up.

But the young man’s first thirty years are perhaps the key to understanding Ralegh’s later acts and the reactions he garnered from his friends and enemies. The life of learning and war he led in his twenties revealed talents that would provide him the weapons to conquer (and be conquered by) life—razor sharp intelligence, a firm belief and respect earned by achievement, and an energy that drove him to the corners of knowledge and the planet.

In part three, Ralegh will finally meet the person who will influence the course and shape of his life more than anyone else: Queen Elizabeth I, the Virgin Queen of England.

The Life of Sir Walter Ralegh, the World’s Greatest…

The Life of Sir Walter Ralegh, the Swashbuckling Bard: Part…