This week, we carved out some special time and space to celebrate the birth of our nation and one of her greatest and most iconic heroes: Captain America.

But there is more to Cap’s iconography than his color scheme, of course. He is far from the only hero to fight injustices wearing red, white, and blue. In fact, right around the time Captain America made his debut (1941) a slew of other heroes and heroines broke onto the scene sporting that palette of Old Glory including:

And that’s just to name a few and those belonging (ultimately, if not initially) to Marvel.

Below, we take a closer look at 7 USA Themed Marvel Characters (That Aren’t Captain America).

1.  Jack Flag. Jack’s origin story is fantastic! He was a part of Captain America’s Hotline initiative. 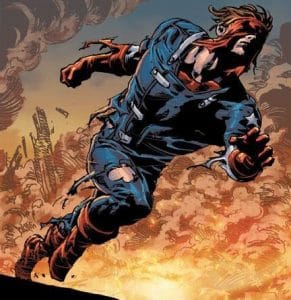 When the Serpent Society makes themselves known in his hometown, he hits the gym and adopts his patriotic costume and moniker in an attempt to make Captain America himself proud.

In a later skirmish with Mr. Hyde, some of the villain’s chemicals spill onto Jack, imbuing him with the usual spread of superhuman strength, stamina, and durability.

My first experience of Flag came when he single-handedly took out most of the Thunderbolts during the Civil War. He was subsequently stabbed in the back by Bullseye who said Jack would never walk again and I assumed that was that. However, he reappeared in Guardians of the Galaxy in whose pages his spine gets repaired – returning mobility.

He’s later recruited by Captain America to fight Hydra and his story ends shortly thereafter. In fact, as much as this image made its rounds, no one mentioned poor old Jack Flag’s connection to that panel. 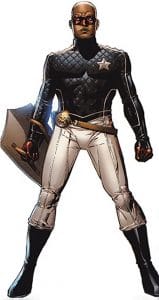 2.  Patriot. Specifically: Eli Bradley. He was introduced in 2005 as a member of the fantastic Young Avengers comic as the grandson of Isaiah Bradley (see: #4). He’s found to have powers that resemble Captain America’s; supposedly gained after a blood transfusion from his grandfather. That’s later found out to be a lie, and he walks away from the Young Avengers.

He would, however, return at their own request to lead the team–even without any powers. Shortly thereafter he dives in front of blast meant for Captain America and does receive a blood transfusion from his grandfather which grants him the power set provided by the Super Solider Serum after all. 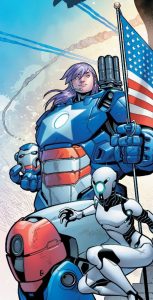 Osborn initially had the suit painted over with Captain America’s color scheme as a bit of propaganda after he he took over in the wake of Secret Invasion. It would later be turned into a drone army before passing to Rhodes and finally (and presently) to Dr. Ho as a member of the US Avengers. 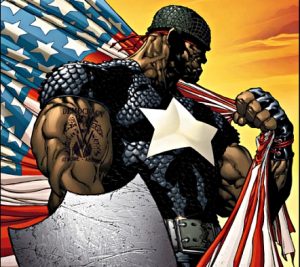 4.  Isaiah Bradley. After the success of Steve Rogers’s transformation into Captain America via the Super Soldier Serum, a multinational cohort attempts to recreate the serum and tests their trials on African American soldiers. Only five of the three hundred test subjects survive the process, and of those five only one survives several field missions: Isaiah Bradley.

He eventually goes back and assassinates the head of the program’s efforts before being taken prisoner and threatened by Hitler himself to be dissected so the serum could be reverse engineered. He’s sprung before that happens, courtmartialed, imprisoned, and finally pardoned by Dwight D. Eisenhower nearly 20 years later.

While he hasn’t seen any action in a costume since then, he is legend among other African American heroes and heroines, by whom is he often affectionately referred to as “Black Captain America.”

5.  Ms. America. America Chavez burst onto the scene in 2011 as a Latin-American lesbian hero with 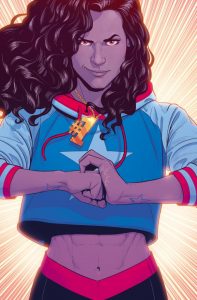 two moms and her presence has only grown!

She’s appeared in Young Avengers, A-Force, and Ultimates before landing her own solo title called America earlier this year.

Super strength, super speed, flight, and the ability to kick open holes in reality for traveling to through the multiverse. Speaking of the multiverse, here’s a fun fact for you: There is only one America Chavez. Kieron Gillen fielded a few questions about his run on Young Avengers, and in response to this one he explains that due to her origins outside of the multiverse, she is one-of-a-kind in a way that the vast majority (if not all) of the rest of the Marvel U is not.

Gillen also wrote a great article on why he chose Chavez for Young Avengers which you can and should read here. Then go and read it all. And by “it” I could mean either Chavez or Gillen. You won’t be disappointed either way. 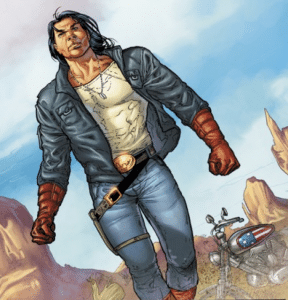 6.  American Eagle.  Jason Strongbow’s first appearances had him in a pretty stereotypical costume, but his post-Civil War guise is much more palatable! He now rocks the red, white, and blue in a more street-sensible getup that makes him look like a biker you’d not want to mess with.

Jason and his brother Ward tangle with Klaw in a uranium mine which is how he came to be all of the super things (strength, speed, stamina, etc). Like Jack Flag, my first exposure to the character came in the pages of The Thunderbolts wherein Jason kicks the crap out of Bullseye – eventually breaking his neck. That had my attention!

He hasn’t been seen much since Dark Reign (2008/09) and a short solo adventure published directly and only to Marvel Unlimited digitally (also 2008). 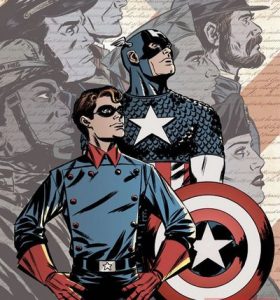 7.  Bucky Barnes.  This list simply could not be complete without the inclusion of Captain America’s ever-faithful James Buchanan “Bucky” Barnes. James Barnes was the first (and best) of five gents to hold the title “Bucky” since 1941 and he eventually went on to carry on the mantle of the Captain himself.

Apart from his eventual cybernetic arm enhancement, Bucky was just the best a man can be. He had no power but willpower, and received training from both Captain America and later the Soviets – making him extremely exceptional at espionage, hand to hand combat, and all sorts of military weaponry.

I’m not sure we can handle any more America than this list provides after a long week full of fireworks, waving flags, and lots of Captain America love. This list is so patriotic that even if you were previously completely color blind, you’re surely seeing red, white, and blue now.

The Drift Episode 6: Updates on Starfinder!