In the early 2000s, Marvel scored quite a coupe when it convinced Allan Heinberg, a writer and showrunner for many youth television series to team up with artist Jimmy Cheung to create a new, younger version of the Avengers. While it might have been a simple exercise to create younger versions of each of the core characters, Heinberg proved to have a vast knowledge of the Marvel universe and created some standout new teenaged superheroes with deep roots to the Avengers and the Marvel Universe.

That it debuted in the gap between the classic Avengers Disassembed storyline and Brian Michael Bendis’ New Avengers launch only gave the comic more exposure and scratched an itch to assemble that was out there in Marvel fandom. Since the iconic first 12 issues, the Young Avengers have popped up in various stories and forms. 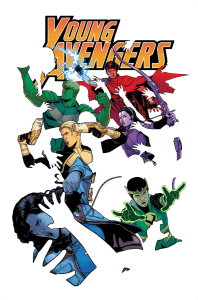 The Young Avengers all come together because of Iron Lad, a strange young hero from the future. As you can imagine, his styling draws from Iron Man but other than great intelligence and a suit, there isn’t much of a connection.

Eli Bradley is the Patriot, the grandson of one of the original test subjects of the super-soldier serum – Isaiah Bradley, an African-American soldier who was large unrecognized because of his race in his prime.

Wiccan is Billy Kaplan, a youngster with powerful magical powers with ties to the Vision and Scarlet Witch.

Hawkeye is super-wealthy Kate Bishop, who trained herself to become adapt at all forms of combat, most notably the bow and arrow.

Stature is Cassie Lang, the daughter of Ant-man Scott Lang and she has shape shifting powers.

And the initial cast is rounded out with Hulkling, who resembles the Hulk in powers but also has shape shifting abilities as well.

The story is unsurprising in some ways and deeply surprising in others. Most of the title is built up that this team is holding together and taking on villains, despite the protests of people like Iron Man, Captain America and former teenage hero Jessica Jones. 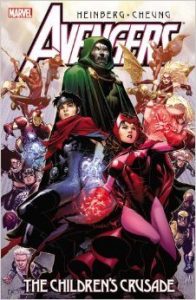 But in other ways, the show is remarkable. It deals in the teenage angst but in ways that are different. We see the backstories of the heroes from before, some of whom were bullied or struggled with how to use their powers initially. We learn about the drug abuse of one of the characters, who is doing it simply to keep up the charade that s/he has powers. All of it is really well done and Heinberg’s grasp on how to write convincing young adults doesn’t vanish just because he has shifted to superheroes and a comic book medium.

The characters have been used since in a variety of ways and stories. Some of them wind up being prominent in the Civil War storyline but they are at their best again in the Avengers The Children’s Crusade series, which, unsurprisingly is penned and drawn by the original artistic team. It is an epic story that crosses over deep, deep parts of the Marvel Universe that I don’t want to spoil. For sure, the original series and this are worth checking out.

Without a doubt, the success of the Young Avengers series has to be responsible for some degree to what we see in the Marvel Universe today, especially with teenagers. Certainly Ultimate Universe Spider-Man existed but I would argue Miles Morales exists because people were willing to engage with these new heroes. Similarly, Ms. Marvel’s amazing run can be traced to the same stylings and mythos of this series: superpowered teenagers who want to live up to their heroes and make the world a better place.

Lastly, especially with Heinberg’s ties to the entertainment industry, this property has to be considered for a piece in the Marvel Universe at some point in the future. In the same way that Guardians of the Galaxy was a reach that audience proved willing to make, there is no doubt that there would be similar welcoming of a teenaged Avengers. In fact, with the promise of a younger Spider-Man in the MCU future, a team of people more his age would be a fantastic place for that character to grow and flourish.

Is Marvel Preparing Us for the Young Avengers?

Here Come Some New Young Avengers to the MCU

Is Marvel Preparing Us for the Young Avengers?