Today, America (or ‘Murica, depending on your current level of inebriation or dude-bro speech mannerisms) turns 241.  Instead of risking a conflagration attempting to light that many candles, we thought we’d play it a bit safer.

But we absolutely refuse to dial down the patriotism.  We don’t bleed red, white, and blue – because that would be concerning and require immediate medical attention.  But we are seeing stars…(which might also require medical attention, but we’re not being literal here).

Since his first appearance in March of 1941, Captain America has sported a star across his chest; the primary white of his red, white, and blue color scheme.  He is the quintessential patriotic hero.  Many have also donned these three colors (tune in Friday for a list of other red-white-and-blue-rocking heroes and villains), but none hold a candle to Steve Rogers’s pure symbolism.

In honor of The United States’s birthday, here are seven links to all things Captain America as penned by the Nerds on Earth…And not one of them features him as a Hydra Agent. 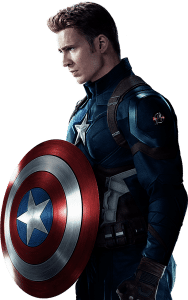 In this 2015 4th of July feature, Nash gushes about Steve Rogers’s moral compass.  Is he the strongest Avenger?  No, but the argument could be made (and somewhat has been made by both myself and Jason and we could both readily argue much, much further) that he is the most essential Avenger.

As Nash points out in his post:  The super soldier serum made Steve Rogers super, but he was already a hero.

2.  Has Captain America Ever Quit?

In a think piece/retrospective, Jason surveys the times in Steve Rogers’s comic history when he actually decided to quit being the icon we so readily identify him as.  I love, love, love this quote from the article:

Captain America also has had the moments of wanting and maybe even needing to distance himself from America and her flaws to stand up for something better. What was unthinkable needed to become a reality: America isn’t worth an icon sometimes and instead needs to pause and consider what is happening and would happen to her. And, usually, Steve Rogers is leading the way to that reflection.

The USA is held on high on this day every year, but she is far from flawless.  Kudos to the Marvel comics staff who use Captain America’s iconography as commentary on that for which he stands.  Very meta and very cool. 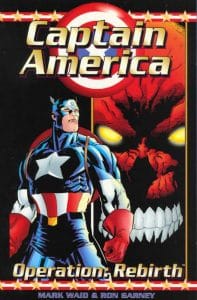 To a degree, this run explores the question, Does America define the Captain, or does the Captain define America?

But we get ahead of ourselves!  Before Waid, there was Gruenwald (Captain America #307-443).  Where Waid focused on Rogers’s courage, Gruenwald focused on his perseverance and can-do attitude.

You can thank Gruenwald’s Captain for the aspect of Evans’s cinematic portrayal of the icon that has him smugly (but truthfully) informing both the bully from the movie theater (The First Avenger) and Iron Man himself (Civil War):  “I can do this all day.”

If the combined 169 Captain America comics listed above prove insufficient to see you through this Independence Day, consider checking out this list of Team-Ups that see Cap palling around with Black Panther, Spider-Man, Thor, Black Widow, and more!

6.  Who Has Been Captain America Other Than Steve Rogers? 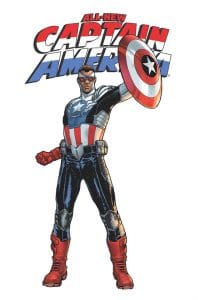 For the sake of your trivia team, read this post.  Thanks to Marvel’s wildly successful cinematic universe, everyone now knows that Steve Rogers is Captain America, but it hasn’t always been so.

Bonus Factoid for your trivia team:  Chris Evans is not the first person to bring Captain America to life on the big screen in a non-serialized format.  That accolade belongs to Matt Salinger (1990).  Reb Brown starred in a direct-to-TV movie in 1979 and Dick Purcell wore the red, white, and blue in a serial that ran in 1944; a pretty incredibly short three years after the character’s debut.

7.  How Much Can Captain America Drink?

If you’re like me, you celebrate the 4th of July by partaking in some form of that glorious liquid the US government decided to outlaw from 1920-1933:  alcohol.

But have you ever wondered what kind of drunk Captain America would be?  Yeah, me neither…

But Nerdist’s resident scientist Kyle Hill answers (sorta) that question during the course of one of his fantastic Because Science w/ Kyle Hill videos on Youtube.  If you’ve never wanted to be the Captain yourself, you might well wish so after watching Hill’s explanation.