By Clave Jones On Apr 30, 2016 Last updated May 5, 2017
Share TwitterReddItPinterestFacebookEmailPrint

For the purposes of this article, Mark Gruenwald will now be known as Gruenwald the Gifted, Greenwald the Glorious, or more expediently, just “Grue.” The reason being, if you write a run on Captain America as epic af Mark Greunwald’s run from issues 307 to 443, you deserve either a nickname or epic poetry written in your name.

But who has time for epic poetry? 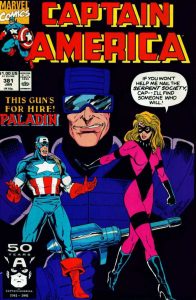 So let’s cut to the chase. Grue’s 137 issue run on Cap was not only a tenure that will likely never be matched, but it also produced some of the most amazing Captain America Stories ever told.

Known for his sense of Grumor and for being an “idea factory,” Grue brought boundless creativity (and onomatopoeias) to the title. But before Grue brought new ideas and adventures, he showed that he knew more than anyone what made Steve Rogers special.

Mark Gruenwald’s Captain America was not over-powered. Instead he understood that Cap really only has one power: the American ‘can-do’ perseverance. When Steve Rogers says the line in the movie, “I can do this all day,” you almost feel as if Mark Gruenwald was saying the words.

And true to Grue’s writing, Cap always did find a way, despite the foes who were thrown against him. As proof, here are some of the major storylines of Grue’s run on Cap: 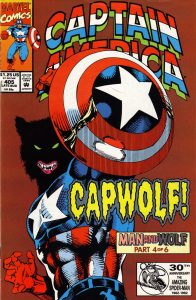 Cap-Wolf It is hard to forget the time that Grue turned Captain America into a werewolf, dubbing him Cap-Wolf. But a storyline that could have been an eye-roll, absolutely worked with Grue’s deft touch. In fact, modern day Captain America writers have revisited Cap-Wolf.

John Walker / US Agent Putting a different face under Cap’s mask was a big deal in 1989, and would set a precedent that was followed by Bucky and the Falcon. Plus, after his stint as Cap, Grue made John Walker a hero in his own right as US Agent.

D-Man Another idea that would have flopped under a less talented writer, D-Man was the mash up of one of the Thing’s wrestling pals with a mixture of Daredevil and Wolverine. But despite enduring a season of homelessness, Demolition Man persevered and remained one of Cap’s closest allies. 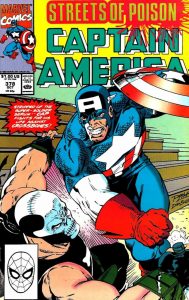 Diamondback When Cap developed a love interest in ex-villain and member of the Serpent Society, Diamondback, Grue took the opportunity to explore the Sentinel of Liberty dating from the wrong side of the tracks. It was a fascinating and compelling love story for Steve Rogers.

Mark Greunwald breathed Captain America. Once he had a replica of Cap’s shield made. What do you do with a collectible like that? Well, Grue and other Marvel writers at the time would practice throwing it down the hallway at Marvel.

Grue was a throwback to the time when comics were fun, but it wasn’t that he didn’t explore serious topics in his run on Captain America. It’s just that he believed that in those difficult periods, Captain America should always symbolize justice, humility, strength, perseverance, and leadership. 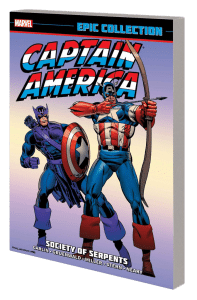 Were he alive today (he died of a heart attack in 1996), I imagine Mark Greenwald would be thrilled to see Chris Evans’ portrayal of Cap on the big screen.

You can find his Captain America run on Marvel Unlimited, and it is collected in some awesome trades:

Captain America: Scourge of the Underworld

Epilogue: In 1996, Mark Greenwald’s ashes were mixed into the ink used to print the trade paperback of his Official Handbook of the Marvel Universe. Maybe that’s not epic poetry, but it’s a fitting tribute to a legend.