By Jason Sansbury On May 2, 2016 Last updated Jul 4, 2017
Share TwitterReddItPinterestFacebookEmailPrint

The 90s were a dark time for comics. Things just became…different. And not in a cool, All-New, All-Different way. As in, comics had lost their way.

Any reading of history tells you that artists became more important than writers and, while not all artists had this issue, stories suffered. Badly. (And don’t even get us started on pouches.) 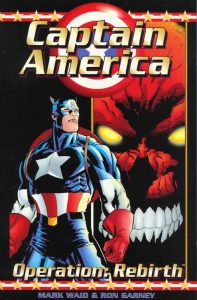 Captain America was in the midst of some dark, 1990s stuff. First, the Super Soldier serum in his blood was vanishing, meaning he was sick to the point of death. And because the Avengers have no retirement plan, Iron Man put Captain America in armor. (I don’t want to talk about it.)

So Waid takes on the book at this point, coming at the end of the epic Mark Gruenwald run. Readers had every reason to be scared and those doubts are assuaded.

Captain America #444 is a unique book, an issue all about the titular character without the character being present in the book at all. You have to get over the very 90s art, which made a lot of regular characters generally unrecognizable. (It took me a minute to realize that the Superman with a mullet was actually Hercules!)

But over the course of the issue, the Avengers put a smack talking government agent in his place when he badmouths Cap. Hercules especially has a nice piece about how the Olympians judge speed by Hermes, etc, ending in that they judge courage by Captain America. (I may have fist pumped a little at this point.)

So, from the get-go, Waid establishes again the core of Captain America is his courage, his heart, and his leadership. 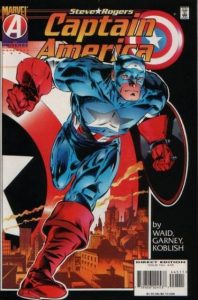 Second, Waid goes back to the core of Captain America, forcing him to partner with his arch nemesis, the Red Skull, who is vital to restoring Cap’s powers, as the Skull is a genetic clone of Steve Rogers, and uses his blood to restore Cap’s powers. (Sometimes, the X-men have nothing on the convolutedness of explanations needed in comics.)

But by returning him to his core, we are reminded about what makes Captain America great. (One of the best parts of Captain America is that at his formation, there was a clear, undoubtedly evil bad for him to fight; you could argue that hasn’t been true since in the world and in comics. I mean, the cover of Captain America punching Hitler is iconic for a reason!)

Third, Waid returns some key characters, especially Sharon Carter. Like Captain America, she was thought dead and in 4 panels or so, Waid waves that away and brings her back, forming an unlikely team of a now-disgruntled Carter, Captain America, full of his idealism, and the Red Skull, in a team-up against the one foe they could all rally around: Hitler. (If you are going to go bad, why not go Biggest and Baddest?)

It is impossible to read Mark Waid’s Captain America and not see the marks of its era. There are storylines written that are closer to today that are great, iconic, more intrinsically woven. (Ed Brubaker’s Winter Soldier for instance.)

But there is something that is classic and iconic about the Waid run of Captain America that came at a time when the icons were all being put on the shelf, replaced by the Punishers, Wolverines and Lobos of the comic universes. (At this time, Batman had a broken back, Superman was dead, come back and had an earring, and Iron Man would soon be replaced with a younger version of himself.) 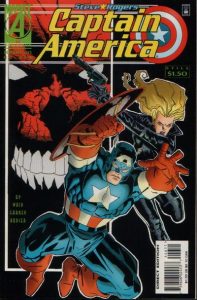 But Waid also acknowledges the world that created Captain America isn’t the one where he lives now. Yes, he has to take on Hitler, but he also has to deal with the truth that America and geopolitics isn’t as pure as it may have once been, or at least been thought of.

Sharon Carter’s presence serves to remind us that America, when push came to shove, abandoned her, leaving her with a deep distrust. Steve Rogers has to come to see her perspective of a blemished America that maybe isn’t even worth saving, while Sharon has to come to see that the ideals that Captain America fights for are worth preserving.

In the disenchanted world of the 1990s, Waid unabashedly seems to uphold there is a better way, one worth preserving, even if it has a high cost. (A line very close to that appears in the very first issue as the Avengers defend Captain America.)

So, it is worth reading Mark Waid’s Captain America. Yes, it is from a different era but it also is an era that proved great comic storytellers could weave important, meaningful stories that enhanced the characters and their histories, not just ignore them.

The early run is collected in the book Operation: Rebirth, or in an Epic Collection, and most of the run is available on the Marvel Unlimited app.

Characters You Should Know: Sharon Carter