By Clave Jones On May 2, 2016 Last updated May 10, 2018
Share TwitterReddItPinterestFacebookEmailPrint

From the moment The Force Awakens began and we saw Rey on the big screen–goggled up and salvaging a piece of scrap, only to then repel down through the vast bulk of the decimated Star Destroyer–did you not wish you knew more about Jakku and Rey’s life?

Gosh, I did. The Force Awakens was masterful in taking old familiar beats that have resonated so long with Star Wars fans, but introducing compelling new characters and evocative new locales.

But I’ve perhaps wondered about Jakku more than any other new setting. Perhaps that is because I grew up in West Virginia, just a short walk from a junk yard. (Keep your jokes to yourself, joker.)

So how about we speculate on the scrap market on Jakku? By understanding what we know of the scrap market here on earth, can we make some guesses about what life was like for Rey on Jakku? I dunno. But I got an article to write, so let’s give it a shot, shall we?

First of all, let’s just acknowledge we won’t be comparing apples to apples here. Unless Elon Musk secretly has a 6 million ton giant starship hidden in earth’s orbit, we can’t perfectly determine how we’d scrap it, should it crash into say, Tunisia or something.

But we’ll make a best guess comparison, then we’ll examine salvaging techniques and equipment Rey might use, before we finish with the recycling industry and system corruption (I’m looking at you, Unkar Plutt). 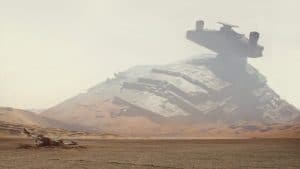 The challenge of salvaging Mega Ships. We’ve learned a lot about salvaging sunken cargo ships, and although it’s not a starship in the dessert like on Jakku, underwater salvage holds intense environmental challenges.

Just as with a Star Destroyer, size is a factor when salvaging tanker fleets, container ships, or cruise ships here on good ‘ole earth. If it’s a scraped hull in a shipyard, it’s just a matter of navigating around in the cavernous space a removing what is still valuable, while cutting down the latticing in a methodical way so it can be re-smelted.

But if the tanker or cargo ship is sunken, then it’s a whole new ballgame. It’s either a small robotic or manned submersible, or you coordinate heavy tugs to re-float the vessel, all out in the elements. With part of the scrap being “submerged” beneath the sands of Jakku, plus victim to the deadly erosive forces of sandstorms, it is clear that worker as a salvager on Jakku was demanding, dangerous work.

Of course, heavy equipment could’ve helped on Jakku, but with the financial returns being so variable, who would invest heavily in that infrastructure? It’s much cheaper to send in individuals to simply do the grunt work, completely unregulated. If they were injured (or even killed) while salvaging, then there is no profit loss. Another individual would simply jump in to fill that void.

This is what we saw on Jakku. It certainly appeared to be an ‘every scavenger for themselves environment’, which undoubtedly created a competitive, dangerous, and lonely environment for Rey and other scrapers like her.

What Techniques and Equipment Would Be required? 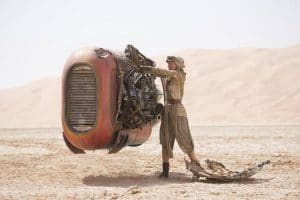 So what equipment would individual salvagers use? It wouldn’t be much different from the tools we’d use if we planned to break down an old 1989 Ford Taurus for junkyard parts, only it’d be supplemented with equipment to account for size (climbing and repelling gear), such as in the case of the Star Destroyer.

Fortunately, Rey showed us most of that in her brief scenes on Jakku. First, was the acquisition, then came the transport. To remove the parts, components, or scrap, she’d use wrenches, screwdrivers, and sockets, just as we’d use on an old Ford Taurus. Except in the Star Wars galaxy, it is more of a multi-tool and is called a hydrospanner.

It should be noted that Rey knew her tools, and if she pointed at one, you’d better pick it up and hand it to her straight away. In addition, I’m sure she had some sort of cutting tool or torch to remove stubborn scrap. Luke’s lightsaber would’ve really come in handy on Jakku.

Once removed, it was simply a matter of loading up the scrap to get it to Jakku’s trading market (called Nima Outpost). Rey’s speeder handled this task efficiently, if a little noisily.

What are the economics of the recycling market? 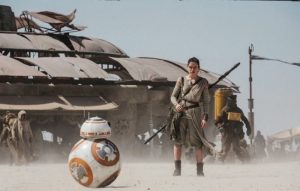 There is money to be made in transforming end-of-life products and industrial scrap into new commodity grade materials, making the old, new again. In the United States alone, the scrap industry fully employs 150,000 people, generating $45,644,002,300 in economic impact.

Who wants a little slice of that money pie?

The price of copper, for example, is just under five grand per metric ton. Just a pickup full of metal and you’ve made a handy little profit, so it’s easy to see why industry invests in night shift security guards to prevent ne’er-do-wells from hopping a fence to steel copper wiring.

The bad news for Rey is that the bulk of recycling and scrapping profits lie at the top, as do profits in most industry. A shift supervisor will make an average salary of $79,000, while an Average Joe junker is barely scrapping buy. It pays to be Unkar Plutt.

What about the human element? 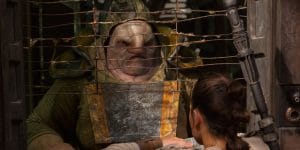 Speaking of Unkar Plutt, The Force Awakened teased that there is much more to his relationship with Rey, but what was crystal clear is that there was a capriciousness to the prices he was quoting to Rey. A piece of junk might pull in a nice share one day, but be treated as junk junk the next.

As with all human created systems, there will be a potential for corruption. The salvor–the only actually doing the grunt work–might not always get a fair reward for their efforts.

Regulations in the United States have fortunately worked for the most part. While it’s never a perfectly well-oiled machine, there is definitely a sense of order and fairness to the scrap market. Work hard and you’ll get your just reward. Usually.

Not so on Jakku, it seems. Gambling, competitiveness, lies, and a general lack of oversight was undoubtedly soul crushing at times for Rey. Every day she’d do the work, but it appeared that she’d all too often go home to her AT-AT without her just reward.

So life on Jakku was no walk in the park, that’s for certain. Treated as expendable and cheap labor, Rey would first need to navigate the harsh environments and elements of Jakku, using her tools and equipment to salvage what she could. But once she’d haul them back to Nima Outpost, she wouldn’t necessarily be guaranteed a fair and predictable wage structure for them.

It must have been an extremely isolating and bleak life, so it only makes sense that Rey held so firmly to the hope that someone was coming back for her.