Heroclix turns 15 years old this year, causing the game to put on headphones and yell “YOU CAN’T TELL ME WHAT GAMES TO PLAY BECAUSE YOU AREN’T MY REAL DAD!” before slamming their bedroom door.

OK, maybe Heroclix doesn’t act like a teenager just because it turned 15, but the sheer volume of miniatures can fill potential players with overwhelming emotions and a sense of panic-filled questioning, such as “How would I even know where to begin if I wanted to start playing Heroclix?” 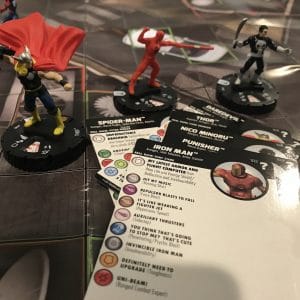 First, let’s give a quick definition. Heroclix is a collectible miniatures game. Each mini has a little dial as a base. These dials display the special powers the figure has, as well as a defensive and movement value.

If, for example, the figure is hit for 2 damage, the dial would be clicked two times (hence the “clix”). Once the dial is clicked enough that the “KO” symbol is visible, that figure is knocked out of the game.

It’s a tactical combat game because the minis move around on a map printed with a square grid. This grid both measures movement of your minis and their close-quarters or ranged attacks. It works via a “point buy” system and each mini carries a point value. Say you are building a 100 point team. If you draft a 50-point mini, you can then fill out your team with a couple 25-point minis for example.

The catalyst that has led to Wizkids selling over 750 million of the figures is the fact that they have the Marvel and DC comics license, among others. Battling with figures on a grid is fun, but it’s so much more so when it is your favorite X-Men or Avengers that are battling villains like…who is the bad guy in current Marvel Comics again? Oh yeah, it’s Captain America, agent of HYDRA (not that I’m bitter).

Second, grab yourself a Starter Set. You might wonder where you get the gridded map and all the figures, tokens, and rulebooks required to play Heroclix. Well, I have some bad news. Despite the incredible ubiquitousness of Heroclix miniatures, it’s pretty difficult to get all this in one place.

Wizkids does sell Starter Sets, but they are surprisingly hard to come buy. Your local FLGS (Friendly Local Game Shop) will often just sell the booster packs that contain the minis. I found a couple Starter Sets on Amazon, but they are often out of stock. (Note: They also have a product called “Fast Forces” that provide a thematic collection of miniatures (like the original 5 X-Men for example), but these Fast Forces packs don’t include a map or rules booklet.)

So encouraging you to pick up a Starter Set is a little bit of a quest, but it’s worth it. And I hope that Wizkids will one day put out a really nice Ticket to Ride-sized boxed set that includes interchangeable map tiles, a nice assortment of heroes, and some quick play rules in addition to a full rules booklet.

Third, go rules lite at first. Heroclix has unfortunately garnered the reputation that its a fluffy and gimmicky game. This is unfair. There is a lot of depth to the rules. In fact, the design history of the game includes Monte Cook, Jeff Grubb, and Jeff Quick, some of the godfathers of the industry.

Instead of being a fluffy game, a LOT of rules have built up in the 15 year history of Heroclix, so it’s best to take it easy on your first few plays. There is no expectation to dig into strategy the first few plays, particularly if you can watch videos to ramp up on the rules. 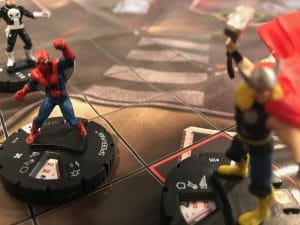 Play a little 1v1 skirmish to get going. If you don’t understand a rule, just yell “POW!” and roll the dice for a power punch! There is time to slowly layer on the rules and increase the depth of your strategy. But don’t get overwhelmed to the point that it prevents you from having fun and starting with a great game.

Fourth, build out your collection. Again, Heroclix is a collectible miniatures game that has sold over 750,000,000 minis. We’re nerds, so it’s fun to open a booster of superheroes to see who you get, then add them to your forces.

If you are a DC fan, it’s fun not just to get Batman, you’ll want to get 5 different sculpts of Batman. And if you are a Marvel zombie, then it’s not enough to just have Iron Man and Thor, you’ll need to get every single Avenger, including Tigra, because the West Coast must represent.

Heroclix is clearly made by folks who have a deep love of comics. Wizkids pulls the flavor out of the comic panels and turns it into 3 dimensional miniatures. It’s great.

Sometimes we take familiar things for granted. Heroclix is so ubiquitous that it’s almost easy to overlook it. But battling as superheroes and villains is fun! My daughter just went off to a summer camp where they are teaching her video production. To understand stop motion, they asked each kid to bring in an action figure. When my daughter asked me if she could bring in one of my posable Marvel Legends figures for class, I told her that I had been waiting my entire life for that moment. We started looking for a particular action figure for her to bring and she lit up at the sight of superheroes, which filled me with joy. My next thought was, “Man, I gotta teach her Heroclix. She’ll love it.”