The legend of King Arthur was born out of a real leader who seemed to exist in England in the late 5th and early 6th century, though historians debate about whether Arthur was only a figure in folklore and legend or an actual person. Regardless, by the medieval times, the legend of Arthur had grown and he had become one of the most beloved stories in all of England. And because the story is so old, King Arthur, the sword in the stone, the Knights of the Round Table and Excalibur all exist in the realm of what is known as “public domain”. 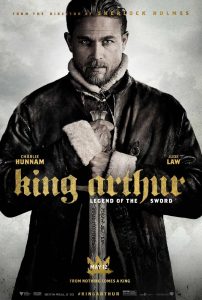 When a work is in public domain, it means that the ideas and information contained are free for use by anyone. Works come into the public domain because they existed before the copyright laws, the copyright on the existing property has ended or, rarely, the creator puts the work in the public domain. Because King Arthur has existed so long, it falls in that category, along with the works of Chaucer and Shakespeare.

Because some of these stories are so well known and beloved, we often see ideas and characters from the public domain get used in new, modern stories. This summer, we have seen two different films that used the story of King Arthur in different ways.

First, director Guy Ritchie released King Arthur: Legend of the Sword starring Charlie Hunnam, who has yet make the jump from small screen star in Sons of Anarchy to leading hero in movies, despite efforts in this film and Pacific Rim.

In this take, Arthur comes up and is raised on the hard streets of London before eventually discovering his call and moving toward becoming the legendary King Arthur. Like many films that use public domain characters, this film wants to have its own twist on the character. Ritchie and the rest working on this production seemed to have an idea of what they wanted, as this film was rumored to want to start a new franchise, but critical acclaim and lack of box office support seems to have doomed that effort, as it has barely made $40 million in the US with a total budget of $175 million. 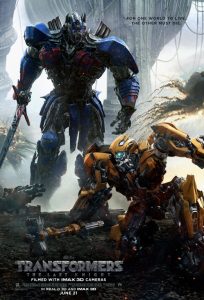 Second, because Michael Bay decided that he had not wrecked enough modern day properties with Transformers and Teenage Mutant Ninja Turtles, the latest Transformers movie also took on the legend of the King Arthur and the Knights of the Roundtable. Having not seen the movie (because I am a good person) and with a summary that makes no sense (blame the movie, not IMDB), it seems as though they needed to throw something interesting into this movie to make it happen and, unfortunately, public domain Arthur and his wizard Merlin were unfortunate victims.

The truth is this: public domain characters being used to tell more modern stories can be difficult. Most of us don’t want to see King Arthur set to an inspiring modern music soundtrack with Jason Bourne like fights. It crossovers too many genres. And we definitely don’t want to see Optimus Prime holding the secret to the Roundtable. But, that said, it isn’t impossible to do a work using public domain characters well. 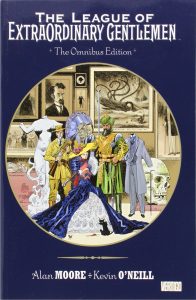 The League of Extraordinary Gentlemen is a fantastic comic series (that was far too rapidly transformed into a so-so movie). Comic creators Kevin O’Neill (artist) and Alan Moore (writer) did a truly unique for the time endeavor: they mashed up the public domain characters, taking Victorian ideas, plotlines and characters to create something wholly new.

Obviously, even for all his eccentricities, Alan Moore is one of the best comic writers around and this series, which started in 1999, is a fantastic series to check out if you never have. It is an excellent example of public domain characters and ideas being done in a new way that bring life to that story.

So what public domain properties do you think creators could use to tell modern compelling stories?

Does great power really have to bring great responsibility?

How D&D Can Give us Hope Through Tough Times

The Nerds On Earth Podcast: An Interview With YouTuber Michael Mercy

The Once and Future King is remarkable for its reality, not its fantasy

Who said history is boring? Here are 7 historical novels for nerds!