Leeroy Jenkins had it right, man.

I don’t know if ‘ole Leeroy thought he’d become one of the Internet’s most iconic memes, but he certainly knew there were times when your game needs to move the action along.

To be clear, I’m not suggesting that one of your party members should consistently hijack your pen and paper D&D or Pathfinder game by jumping into a decision quicker than a hedgehog’s wink, but we’ve all been in situations where the game was dragging and a decision needed to be made between the right hallway or the left hallway.

I’m just suggesting that an occasional Leeroy Jenkins might not be a bad thing to speed up your game when it is slow as molasses running uphill in January.

1. Pull a Leeroy Jenkins. In fact, this is my first suggestion. If your group has been dithering for a while and are having trouble pulling the trigger on a plan, sometimes you as a player can take it upon yourself to run headlong into the action.

Don’t do this often, mind you. It’s poor form to be of the type that always dominates the action, but if you’re typically a team player and it’s clear that your group is dragging its feet on a decision, it’s actually good to pull a Leeroy every now and again. 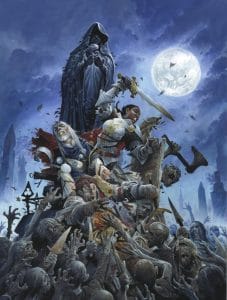 2. Pull a Chandler. Leeroy is for the players, while Chandler is for the GM, because there are things a GM can do to speed up the action as well.

Raymond Chandler was a novelist who wrote this about writer’s block: “When in doubt, have a man come through the door with a gun in his hand.” This has widely become known as Chandler’s Law.

Whatever. It should not be a big deal and it certainly shouldn’t wipe the party. The point is just to create a situation that captures their thoughts.

3. Slow them down to speed them up. If the players are talking in circles and never coming to a decision, simply ask them, “What are the clues you have thus far?”

The act of them slowing down their idle chatter in order to organize their thoughts of the information they know can actually help speed up their game. Reviewing their notes can often help bring a clear decision faster.

4. Send an NPC at them. Maybe they need one more small little clue or a simply nudge in the back. A simple NPC interaction might do the trick.

If they are having trouble with a locale, then simply noting the features of the room one more time might do it.

Then again, you might just have a slow group, and that’s OK. It’s not the end of the world. Still, it’s a bummer when large chunks of your play session are wasted through not being able to make decisions in a reasonable amount of time.

What are you favorite strategies for moving things along in your favorite TTRPG?  Let us know by sharing your tips and tricks in our Character Sheets Facebook group!

The Life of Sir Walter Raleigh, the Swashbuckling Bard: Part 5