Splodin Mephits: A D&D 5e Encounter Idea to Spice Up Your Game

So the band of hobgoblins and their captain has rounded up one of each of the mephits (dust, ice, magma, mud, smoke, and steam) kinda like Pokemon (gotta catch em all!) and tamed them. They used them very much like Pokemon, in fact. They send them into battle instead of themselves!

But here’s the twist:

Unlike Ash Ketchum, the hobgoblins see the mephits as 100% expendable. In fact, each round of combat until every last one of the mephits is killed, the 3 regular hobgoblins ready an action.  Specifically, they draw their longbows and if one of the mephits is low on HP and within 5 feet (melee range) of a PC, they try and get the killing shot off. If the first one fails, the other two will attempt the same thing. 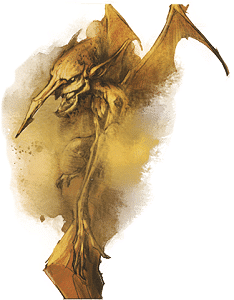 The idea here is to catch the PCs in the mephits’ Death Bursts to varying effects.

Mephits also have a flight speed and flying monsters are an easy way to change up an encounter all by themselves. You could have them dive-bomb the PCs in a sort of kamikaze maneuver when they’re low on health to set up the Death Burst.

Imagine being a PC in this encounter. The hobgoblins stay well back; the captain doing nothing (but perhaps laughing and slinging insults) while the other three train their bows…but don’t fire them. They’ll have no clue what your readied action is until they see it in action. That will come as a complete surprise! And a smart party might even make some alterations to their strategy in response.

The encounter with the mephits alone is only a CR 3 encounter. But with the odds fairly high that some damage will be taken and possibly even some conditions imparted by the Death Bursts, the remaining encounter with the hobgoblins and their captain (with an encounter CR of 5 total) becomes a bit more tricksy.

I demoted the total CR of the encounter by 1 (from 7 to 6) since you’re really fighting two separate encounters that are strung together as opposed to a swarm of baddies all at once.  Plus you could easily just have the goblins high tail it outta there with their pets destroyed!

Up: The Reckoning (Or How a Beloved Pixar Film Almost Tore Apart Nerds On Earth)