Whether you are a DM or another player, when a new player comes to your table, you have an opportunity to help someone fall in love with the game. And while it would be easy to turn into the know-it-all and declare all the ways in which the newbie is failing, we should all look at it as an opportunity to help make the player better!

So here are some practical ways to help new players when they first come to the game. (This post assumes that the player has a character rolled up and is ready to go or playing a pre-generated character.) 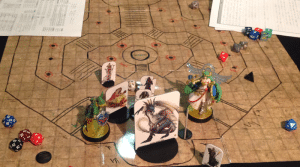 Let them determine how deep they want to dive into the roleplaying. Some people are recovering drama geeks from high school and want to go all in with accents and flair from the start.

However, for most people, it takes some time to get to that level of comfort, if we ever do. So let them decide how they want to play it.

If their first instinct is to say “Well, I think my character would say something like…” that is a great start! If you are the DM, you can ask some questions that might lead them to dive a little deeper. “How would your character feel about this moment?” or “What does your character want to gain out of this exchange?” are 2 examples of questions that can help guide players into a little more roleplaying.

Also, at the end of sessions, you can be generous with XP if they took some roleplaying chances. (If you want a great example of a fun roleplayer who talks about what her character does and plays it really well, you should check out Kelly Link of MissCliks Risen campaign, which streams on Twitch and is available on YouTube as well.)

Simplify what you can. When you have played a roleplaying game for awhile, you can forget how easy it can be to get lost in the expanse of all the numbers and calculations. If you are a veteran player and don’t mind mentoring new players, sit beside them and show them where things are on their character sheet.

It always helps to have a guide, because, if we are honest, no one has made a simple, easy character sheet yet. And if you are a DM, get the key stats from that character ahead of time so you aren’t asking them to find their armor class every time to determine if they are hit. It is the difference between “What is your armor class?” followed by a long awkward pause as they search and don’t know and “Your armor class is 13 which isn’t high enough when the ogre swings his club at you.” But having a veteran show them where their armor class is helps not slowing down the game. 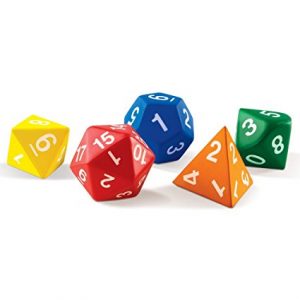 Color code your dice. It seems like a really simple idea but I hadn’t ever really thought about it until we were asked to review the Kickstarter of Dice of Rolling.

That kickstarter effort smartly did a few things. It made each die a specific color, it gave you more of dice that you might need to roll more than one of and packaged it all together. While the company is selling the dice sets on a pre-order after their successful Kickstarter, you could just as easy put together a color coded set from what you have and give each player an index card guide to what each die is color wise. (And if you are playing with kids, I recommend this awesome foam dice set, which is already color coded and larger than regular dice. Do be warned you will need to buy some d6s as well, but they are available as well.)

Since we use HeroLab, they get all the information they need and then some if we print everything out, so I recently bought a set of colored highlighters and will go through an mark their character sheets so they can easily find what they need. Being able to say “your spell save is blue” helps a whole lot more than trying to guide them on a sheet. This is especially helpful if you are DMing for a bunch of new players at the same time.

Let them dream bigger than the game mechanics. It is easy for us to rattle off some rules and shut down new players but one of the things that we should encourage is their creativity. And before your Rules Lawyers come at me, I am not saying break the game’s rules; I am saying let them describe what they want to do and let them get as close to that as they can, with some dice rolls.

Level them up. If the players are going to keep coming, they are going to level up. When they do, they suddenly have new abilities, spells, etc. that they might forget about.

I like to encourage them to learn their characters and know what they are capable of. I may ask them guiding questions like “If you needed to do the most damage possible with one attack, what could you do?” We have a new-ish player in our party that is playing a paladin who had completely forgotten about his Divine Smite ability.

Another fun way to take a break and test character knowledge is to stage a Battle Royale style session with no long term ramifications but with each character playing for themselves against the rest of their party. In that scenario, characters quickly learn about themselves and the others in their party as well!

We want the love of roleplaying games to grow and expand! So, when a new player comes, do everything you can as a DM or another player to help that player have a great experience at a comfortable level for them so they will want to play over and over again!

Splodin Mephits: A D&D 5e Encounter Idea to Spice Up Your Game

Glass Cannon Podcast: Episode 120 – A Matter of Life and Breath