Brain Games: A Pathfinder Encounter Idea Inspired by the TMNT

Once the Tortles were released as a playable race in Dungeons and Dragons, I immediately started making the Ninja Turtles in that system.

The other Nerds on Earth writers expressed interest in our Slack channel about a campaign in which the PCs are the four Tortle brothers (and possibly their ratfolk sensei, Master Splinter). After thinking about it for a second, I realized that an entire campaign featuring those characters didn’t seem like the best idea, really…but an epic one-shot wherein the turtles square off against some of their most iconic big-bads at various PC levels? Now that was an idea worth exploring.

So below I’ve drafted up their encounter inspired by Krang, the utrom from Dimension X and TMNT villain using a Pathfinder baddy from the first Bestiary. 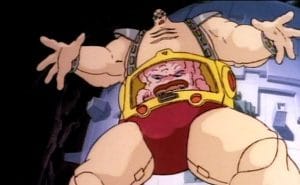 Krang is usually depicted as a brain with tentacle-like appendages who resides within some sort of mechanical humanoid of which he has control. So we’re taking those basics and running with them!

To get to the big, scary reveal of this encounter, you’ll want to set this up very simply. Simple = deceptive in this case.

The Intellect Devourer assumes control of a dead or dying creature for up to 7 days as if they’re under the control of a Dominate Monster spell. So maybe:

In any case, the Intellect Devourer uses host bodies to indulge in the lust, gluttony, and cruelty that it otherwise cannot, so the secretly controlled person should be one heck of a glutton and hedonist!  Think lavish feasts, drunken orgies…all of it outside the normal behaviors of the host from before.

Upon confrontation or interrogation, the host attacks (using whatever armor, weapons, and stats come with the NPC you choose to use as the vehicle for the Inellect Devourer). He or she violently defends the pursuit of their lusts. It may be that the very public murder of the last person to confront them is the thing that involves the heroes.  It’s out of control! Choose something low level…CR 2 to CR 4. No need to get crazy with this stage because it is just the set up, after all. 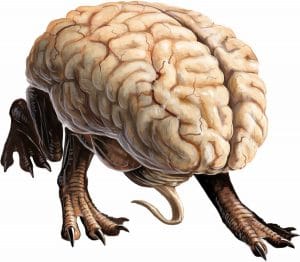 When the host dies, maintain initiative order because the Intellect Devourer itself will emerge from the host’s mouth–dazed for 1 round.

(Editor’s note: It’s a miss if you don’t describe the heck out of the Intellect Devourer’s emergence from the body. This thing’s appearance on the scene is half the craziness of the encounter and 100% of the creep factor.)

So what seems like an extremely minor side quest turns into one heck of a freaky scene and fight once the quadrupedal brain slips out of its host and very aggressively seeks another home inside one of the PCs!

Some of the damage it takes during its dazed round can be regained using Cure Moderate Wounds, and then it can set to causing absolute chaos on the battlefield with spells like Confusion, Daze Monster, and Invisibility while dealing damage to weaken its next potential host with its four claw attacks and Inflict Serious Wounds before attempting the possession…

…which involves crawling into the mouth of its victim for a coup de gras.

This is just one crazy and weird encounter that is sure to shake up your PCs!  Full of surprise twists and absolutely freaky mechanics, an Intellect Devourer is a fantastic way to disturb your adventurers during your next session.

Makes Your Skin Crawl: A Pathfinder Encounter Idea to Spice Up Your Game