Sometimes I feel like D&D players that are always begging for more content ideas are beating a dead horse that was left for dead but is now somehow stumbling around nearsightedly in a pasture, attempting to hump sawhorses, a rain barrel, and a rusted-out old pickup truck.

At this point in D&D’s 40+ year history, there are so many content ideas inspired by Middle Ages Euro-centric locations that it’s a tough sell to say we need more of those. That’s why the latest Tomb of Annihilation adventure is so refreshing!

Set in the jungles of Chult, Tomb of Annihilation takes inspiration from real world Congo, The Land Before Time, Heart of Darkness, and Indiana Jones and the Temple of Doom, much, much more than it does anything Euro-centric.

With the first half of Tomb of Annihilation being a hex crawl style adventure (like the old school Isle of Dread), there is a lot of opportunity to place interesting locales or encounters that simply can’t be included in the single Tomb of Annihilation source book. And jungle and African-inspired adventures are one area where D&D really does lack support! 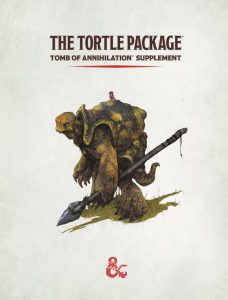 The best place to look for additional Tomb of Annihilation is from an official supplement released by the D&D team on their DMsguild.com website. Called the Tortle Package, the supplement adds a playable turtle race, which ‘totally, dude’ should be the Ninja Turtles.

Coming in at 28 pages, the Tortle Package is a nice supplement, adding a ton of geographical flavor to an area of Chult that only received a few line mention in Tomb of Annihilation. You can get the Tortle Package here and while you are there, click around for other third party products on DMsguild.com, although the quality on those can be hit or miss.

But although fun, the Tortle Package isn’t richly steeped in Afro-centric inspiration. A turtle race is nice, but I want something that is uniquely and distinctly Chult. After the afore-mentioned Isle of Dread, a great place to find that material is in the pages of the old Dungeon Magazine.

Written by David Howery, there was a loose series of adventures in Dungeon Magazine that featured a jungle setting that could provide the inspiration for Chult based side quests or adventures. They were:

All of them are filled with stereotypes and tropes (the Dragon Magazine supplement in particular will bring some eye rolls), and Tomb of Annihilation does Chult with more care and refinement. But that isn’t to say that there isn’t some ore that can be mined from these old jungle-based adventures, particularly if you want to add further flavor to the hex crawl portion of the adventure. 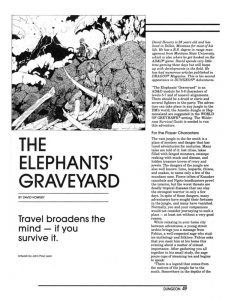 The Elephant Graveyard really fits the tone of exploration that Chult offers. Guided by a mysterious legend, the players are given a partial map that will lead them to a hidden valley where elephants pilgrimage to die. With only one secret way to enter, the valley is said to hold countless treasures and mysteries. There are lots of ways to use the adventure:

The Elephant Graveyard has a truly open world philosophy. It’s filled with sub-plots and could be dropped into almost any hex in Chult. (I’m not saying, but I’m just saying that someone has archived the PDF of old Dungeon magazines here.) 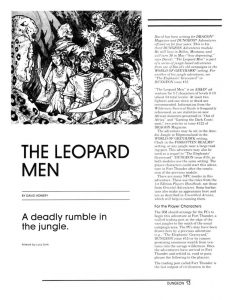 The Leopard Men is tailor-made to be a side quest adventure from Camp Righteous or Camp Vengeance in Chult and the benefactor NPC could easily become one of the Merchant Princes of Tomb of Annihilation.

The downside of the adventure is that it would provide little new over what Tomb of Annihilation already offers. Indeed, ToA already includes factions and missions with roughly the same flavor. The benefit is if your players like that sort of thing (find the hidden cult and wipe them out), then The Leopard Men would be an interesting way to throw it at your players again at a different level. (Archived here.)

The Land of Men With Tails is another adventure where any of the Merchant Princes of ToA could be the quest giver. The hook is that the son of the wealthy patron has gone missing. It provides an opportunity for a stealth mission or even a full-out assault.

What The Land of Men With Tails lacks in originality, it makes up for by being firmly on point in Chult and it’s better to be effective than original. (Archived here.)

D&D doesn’t have to be only Western European locales (And it doesn’t even need to be only D&D. These adventures would be interesting to run on the planet of Castrovel in the Starfinder RPG setting.)

Being set in Chult, Tomb of Annihilation reminds us that D&D doesn’t need to always be set in a Tolkien-esque world of tall forests, grassy plains, and snowy peaks. Unfortunately, we need to go searching for that type of content. Maybe these old Dungeon Magazine modules can help.

If you want a physical copy of one of these old treasures, check out Noble Knight. They specialize in out of print RPG goodness.