We write about comics frequently at nerdsonearth.com. So most the time, when someone throws out an idea about an older comic or series, someone will chime back: “Yeah, we have already written about that.”

So I was stunned to discover that we have never written about Locke and Key.

Typically, horror just isn’t my genre. There is a long and respected tradition of horror comics. At one point books like Tomb of Dracula were among the leaders on the sales charts for years before they were overcome by books like the Avengers and the Uncanny X-Men.

Now, neither of the two major publishers (Marvel and DC) currently have what we would call a classical horror book. But that isn’t to say that there isn’t a market for horror comics. And in the case of one book in particular, it is so well done that even a non-horror guy like myself has to admire and love it. That, of course, is Locke and Key by Joe Hill and Gabriel Rodriguez.

Locke and Key is a horror story in the realm of the Lovecraftian stories of old. The set-up of the story is that a family moves back to the home of the recently deceased father, the Keyhouse, an old creepy mansion that should have just screamed “Nope. We ain’t living here.”

To make sure that we are all in the set-up, the town is named Lovecraft, Massachusetts. And the father, and whole family, were traumatized by a psychotic man, who strangely has roots to the area as well, even as they lived in San Francisco originally.

Over the course of 5 years, Hill and Rodriguez weave a tale that goes across time, dimensions and creates a deep, deep mythos that if I were to outline it sounds crazy but, honestly, is easily followed if you read the stories. So what makes the stories work so well? 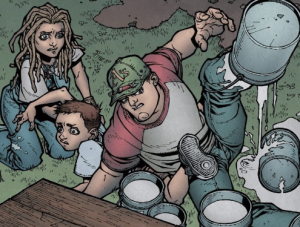 It has a realistic depiction of teenagers. Along the lines of the darker parts of the Buffy-verse, the teenagers of this series feel real, even in the midst of the traumas that they have and do experience.

The three main children and their depiction as kids and teenagers feels authentic. For instance, the daughter removes her dreadlocks as they move to Massachusetts because she doesn’t want others to see her style as a cry for help. It is a small detail but it is one of the things that makes the characters feel genuine and authentic.

The mythos is really strong. When it comes time to do world building, some authors can’t do the work of shifting the narrative at just the right time and zoom in and out as needed.

Author Hill is particularly an excellent storyteller in this regard. (Trivia: Hill is the son of Stephen King, writing under a pseudonym so he could make his own way out of the shadow of his famous father.) Though the story and history are intense and condensed, you never feel like you don’t understand what is happening. And he works to seamlessly reveal the right piece at the right time.

There are some amazing cliffhangers. Even reading this in trades today, there are some epic moments that are obviously stop points for issues that just grab you and make you want to hold on for what is next. Horror comics have tended to do what horror movies have done: they have drifted towards gross depictions of death, etc. 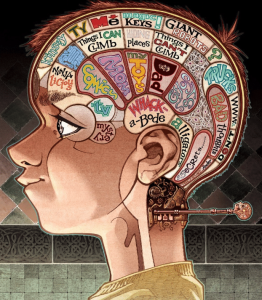 It is now a complete story. Seriously, if you want to binge through all 6 trades, you can do it right now. While it was a joy to read as the issues came out slowly, it is also nice to sit down and plow through huge chunks of the story as well.

Finally, this show is on the Hollywood watch list. One pilot for television was already shot and since then, another has been ordered, this time by Hulu with Carlton Cuse (of Lost fame), Scott Derrickson (director of Doctor Strange) and Lindsey Springer as producer.

Recent updates have the director of the recent film It as the director of the pilot and casting information has been leaked. Additionally, there is an excellent audio version of the story that has been cast with well named actors that is worth checking out as well. The episodic way that they told stories no doubt helped television to see the potential in this book.

No matter how you wind up engaging in the story, Locke and Key is definitely a horror story that is strong on the story as well as the horror and suspense that you should definitely check out.

An Introduction to Locke and Key: A Fantastic, Lovecraftian…