The forge has been lit…but where is the Hammer of Agrimmosh?  Well, that question will have to wait a minute as Etena has grown impatient with our heroes and, not believing their explanations of the hammer’s whereabouts, plans to take it from their corpses!  Find out what happens next in Episode 128 – Slag!  You’re It!

With the ritual to relight Minderhal’s Forge complete, Etena turns her attention to the heroes, demanding that they hand over Agrimmosh, the Hammer of Unmaking. Claiming to no longer have it, the party must face the wrath of Etena as well as the ancient guardians of the forge. 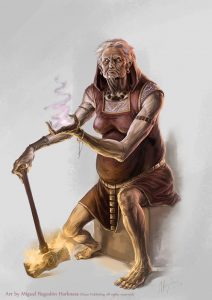 Behold! A Review of Xanathar’s Guide to Everything, the Newest Rulebook for D&D 5e