Caroline Ward captures snakes, despite the fact that others tell her she should kill them on sight.

Oddly, it’s not because the others are concerned the snakes are poisonous. Instead, these particular snakes have a blood red tail. Everyone knows you should kill those snakes on sight.

But why? Well, because legend says that the fandrefiala snake has a blood red tail because they can magically transform themselves into a spear and drop out of trees, impaling their victims below.

This is a humdinger of a tale. It’s also completely ridiculous and a perfect example of a “magical belief.” Magical beliefs about animals range from snake spears to wholly mythical animals and all sorts of traditions, spiritualism, and superstition in between. It’s goes way beyond Bigfoot or Chupacabra.

These magical beliefs have a measurable impact on the welfare of real-life animals and ecosystems. The fandrefiala snake of Madagascar is luckily not on the endangered species list but many other animals that are shrouded in superstition are. (Read more about Dr. Ward at Science Daily.)

The aye-aye, another animal on Madagascar, is seen as a harbinger of death, the superstition being that if an aye-aye points its long, skeletal middle finger at you, you are cursed to death. So the locals roll initiative on sight, because the only way to prevent bad luck, they believe, is to kill the aye-aye and display it on a roadside pole. As a result, the aye-aye is on the endangered species list with a decreasing population.

So to save these animals, scientists and conservationists must first understand the beliefs, root them out, and devise strategies to counter them. But fitting conservation science to these beliefs can be a challenge. It’s tricky business trying to combat folklore with facts.

To make matters trickier, beliefs can also evolve over time. People change, migrate, encounter new beliefs, and actively work to rejuvenate and protect old traditions. And magical beliefs and taboos can vary from villages to village, making a single approach unlikely to fix every situation.

The good news is that conservations are approaching this in ethical ways. They try to treat people’s worldviews respectfully. Conserving biodiversity is an admirable goal, yet so is allowing people spiritual and religious autonomy.

It’s around the world as well. European and western people are not exempt from magical beliefs. The Loch Ness Monster, for example, brings hundreds of thousands of ecotourists to the Scottish lake, potentially harming real species. And the locals in Iceland still respect for Huldufólk, or elves, thought to be supernatural creatures that live among the rocks. North America has Bigfoot and Chupacabra.

We could all stand to watch the National Geographic channel a little more closely, in other words.

But in no area are there more magical creatures than in D&D. How does the magic animals, myths, and superstitions in D&D jive with animal conservation realities?

IDK, but let’s all roll a druid at least once. Sure, D&D is make believe and full of bears with owl heads, so killing one of those for XP doesn’t really harm a real life aye-aye or fandrefiala snake. But why not spare a thought for real life conservationists like Caroline Ward? 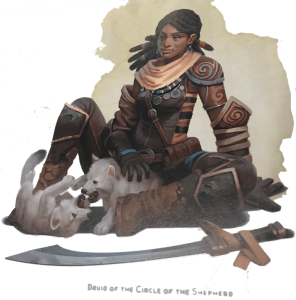 In Xanathar’s Guide there is a new D&D 5e Druid Circle that might help with this. Called the Circle of the Shepherd, it’s a druid who recognize all living things play a role in the natural world and sees living creatures as their charges.

Besides, the picture of the druid in Xanathar’s Guide is super cute, featuring cuddly little pups. I’ll think I’ll roll up a Circle of the Shepherd druid and name the character Caroline Ward. It might be fun to role-play this out.

Maybe I’ll even try to parlay the next time I roll initiative. Instead of killing the creature, I might try to understand it a little better, curious as to why it might be pointing a long, skeletal finger at me like an aye-aye.

Nah, I’ll likely have my character kill it, then check it for loot. I need the XP, after all.

Hear me Out, Midi-Chlorians Are Not Bad