Mike Mearls and Chris Perkins, the D&D wizards, have confirmed it: The D&D braintrust have finalized plans for 2018 D&D storylines plus have 2019 largely in mind as well.

So right now as we are enjoying the current storyline – Tomb of Annihilation  – scheming is afoot in finalizing the Dungeons and Dragons storylines we’ll enjoy for the next couple of years. But we know VERY little about these future stories. All we can really do is speculate.

But this is the internet, after all. If the Internet teaches us anything, it’s that it’s irresponsible NOT to speculate, because that’s what us crazy kids do on the internet. So, here I go with my most educated guesses on what the 2018 and 2019 publishing schedule of D&D will be.

The Evidence for Future D&D Books and Storylines 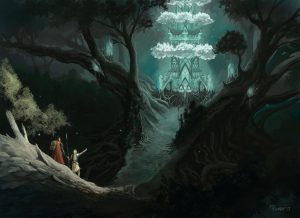 There are lots of clues that lead us to believe that the Feywild is plotted soon on this roadmap. I’m thinking it’s the early 2018 storyline.

There are several reasons for this, first being that there are lots of fey in Volo’s Guide to Monsters. This, of course, isn’t surprising, being that fey have long been a part of D&D history. But it’s clear that the D&D team excel at bridging the past with the present.

Volo’s Guide includes the xvart, nilbog, redcap, quickling, plus more. Further, Volo’s Guide also digs deeply into hags, who could serve as a strong thread throughout a fey storyline. Further, Chris Perkins has a self-professed love of fey and their lore (including the Shadowfell), and fey would provide a tonal shift away from the Tomb of Annihilation storyline. WotC wants to keep us guessing, after all.

I think the fey storyline will be set in the Dalelands, a forested region full of fey and home to the wizard Elminster.

A brief sidebar: It’s important to understand that these aren’t necessarily products that I want WotC to do, it’s more that I think this is what they’ll do, based upon the evidence we’ve seen thus far, both from the current product line and from interviews.

For example, I’m an Oriental Adventures junkie. I loved those books as a kid, up to and including owning a sweet set of ninja throwing stars that I’d stick into trees. But there is scarce evidence for such a product, as Kara-Tur has received little mention the past couple of years. So while I might want it, I don’t think it will happen, based upon evidence.

That said, let’s move on. 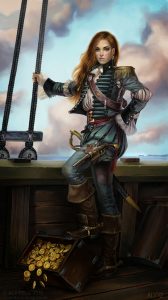 The Moonshea Isles stick out on the Mike Schley official map of the Forgotten Realms like a homing beacon, just begging for an adventure to be had there.

But it’s not just because the Moonshea Isles stick out on a map. A pirate-themed adventure would certainly be commercially successful, something that would be, you know, welcome for a for profit corporation like WotC.

But the triton playable race was introduced as well. As were lots of aquatic creatures in Volo’s Guide, such as the deep scion. But this might be all the aquatic adventuring we get. The reason for this is the Moonshaes would bridge with a fey story nicely, as fey are prominent in the Isles as well. As are northmen and werewolves (5e shifter anyone?).

Further, the Moonshaes areas are a rough analogue for the British Isles, complete with Excalibur-like lore. Chris Perkins had a homebrew campaign called Valoreign that could be mined for inspiration. That included elven firearms that would make for a nice pirate flintlock. And Mr. Perkins has wrote extensively about an island-based Iomandra in his popular (and brilliant) DM Experience column. The point is that the Moonshaes are right in his wheelhouse, in more ways than one. 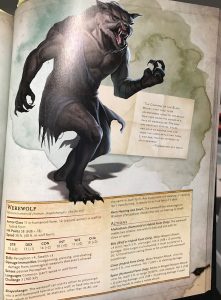 2018 Companion Book: Given the above, a late 2018 companion book could include the Artificer class, firearms, swashbuckling gear and equipment, lore on sea-type stuff, and much more.

Don’t look for this one to be named after Volo. But even though I think a werewolf, pirate, or northman character would make a for a great conceit for the companion book (like Volo and Xanathar have done), I don’t have a thought as to who WotC would use for that.

D&D Bonus Book in 2018!: Mearls let it slip in the podcast that there was a possible fourth book in 2018 before quickly catching himself and moving on.

This is likely a Yawning Portal-type book. D&D has 40 years of back content and development costs are lower to polish up nostalgia content for 5e. WotC is not a non-profit organization. It’s unlikely they’d not do something similar if Yawning Portal was profitable.

Besides, a collection of one shot adventures playtested by WotC provides a nice middle point between the long published adventures and the “DLC” content of DMsGuild.com. 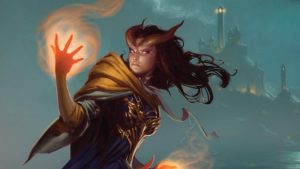 You know how you engage these darned kids with a story nowadays? You put a little Game of Thrones in it, that’s how. So I think 2019 will bring a “war-torn nations” storyline to D&D.

I think they’ll consult with Erin Evans, who wrote many of the recent D&D novels, which centered on Tiefling and Dragonborn, and had many plot points that revolved around intrigue.

Additionally, Evans is a trained anthropologist who has done work in creating a language for the Dragonborn. Even though WotC is out of the novel business it doesn’t mean they plan to let the current lore go to waste.

Further, recent D&D products have included nods to the area of Cormyr, a region that could draw in the aforementioned elements of intrigue and also features a queen, Purple Dragon Knights, and more potential story threads.

Orcs and other goblinoids have also received attention in recent products such as Volo’s Guide. This would give WotC and opportunity to show off the mass combat rules they debuted in Unearthed Arcana.

If I’m right about the theme of this future D&D storyline, I might be wrong about the location of Cormyr. Another opportunity would be Tymanther, an area ruled by Dragonborn and Bahemut resides there, I think.

(By the way, when Volo’s Guide to Monsters came out, I guessed the next book would be “Volo’s Guide to Heroes” and include new PC sub-classes. While I whiffed on the name, I hit the spirit and purpose of Xanathar’s Guide.)

What we haven’t seen yet in D&D 5e is a robust city-based adventure. 2019 could be an opportunity for that. Baldur’s Gate and Waterdeep as vastly more well known, but stick with me here. I think the adventure will begin in Athkatla, the capital of Amn, the Merchant’s Domain.

Amn holds colonies in Chult, Moonshaes, and more, a fact that would tie adventures together nicely, giving DMs an opportunity to run connected stories.

But what if the story doesn’t stay in the city? WotC previously dropped lot of clues that looked like they were heading toward Maztica, but ended up in Chult. What if WotC takes us to Maztica anyway?

Amn was once a heavy trade partner with Maztica. But lore had Maztica being lost. What if part of the adventure is very exploratory, with that pulpy lost colony vibe?

This might not be want people want, but if you listen to our interview and interviews elsewhere, it’s clear that the D&D team fundamentally does not want several different campaign settings that operate as parallel product lines, cannibalizing sales from one another.

Instead, they think of campaign settings as different genres. Strahd is gothic horror, Dark Sun is post-apocalyptic, Eberron is pulpy adventure, etc. With this in mind, Maztica could plausibly be the pulpy adventure “skin” for Eberron. Maztica has wild halflings, jaguar folks, Dog Men, and much more.

Maztica wouldn’t be full Eberron, but it would be fun. Plus, there are lots of hints dropped in recent D&D products for Maztica. 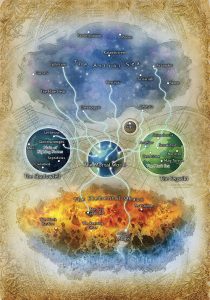 2019 Companion Book: I think the late 2018 companion book would give more player content and DM tools that would further support a worn-torn nation or city based storyline. It might even go ahead and seed stuff like the Jaguar People race.

That would leave the 2019 companion to open things up a bit. What if psionics rules are ready or we see the Gith as a playable race? Let’s not forget that Perkins wrote some of the iconic Gith adventures in the pages of the old Dungeon magazines.

I’m calling this 2019 D&D book Volo and Elminster’s Excellent Planeswalking Adventure or some such thing. They can pull in James Wyatt’s planes stuff he’s doing with Magic: The Gathering or other multiverse-type stuff.

Again, this is all crazy speculation. Remember, there is 40 years of Dungeons and Dragons history to pull from, which is all the more remarkable because there was a brief period of time in there when Coldplay was popular.

I’ve read every single D&D product specifically to keep an eye on clues toward future storylines. I’ve read between the lines in interviews and have been following Unearthed Arcana closely. These are educated guesses, but they are ultimately just guesses.

I tried to look for clues, think through what would be viable commercially, factor in what Chris Perkins would have an interest or proclivity toward, and turn off my impulse to project want I would want. This is what I came up with, knowing that 2018 D&D products are already written and 2019 D&D products outlined.

In the end, I have no idea what future D&D books are in store. I just know I’m excited for them.

Mythic Odysseys of Theros: Who is the Latest D&D Book For?

Mythic Odysseys of Theros: Who is the Latest D&D Book…

We Don’t Deserve Danny, But He’s Made Every D&D Monster…