Unlock! Review: An Escape Room Experience in the Palm of Your Hand

Escape rooms are all the rage right now. They are popping up everywhere and your social media feed is undoubtedly peppered with group photos of folks holding signs declaring their successful (or unsuccessful) escape.

Capitalizing on the craze, Space Cowboys | Asmodee brings us the Unlock! series of games. The Unlock games set the stage with a scenario, then place players on the clock as they use their eyes and minds to navigate a series of rooms riddled with clues to escape!

Each Unlock adventure consists of a deck of cards that break down into four categories (of my own naming):

Each of the cards is labeled with a letter or a number and is revealed from the deck once its corresponding clue is discovered during play.

All of these cards are beautifully designed; boasting a card size that dwarfs your standard deck of poker cards without feeling like humongous flashcards. The art is really detailed and necessarily so as the art itself provides most of your means of progress. Your eyes don’t run over these cards, they dwell upon them, so the art’s quality is a huge win.

And something not included in the box but required for play: a free app! The app is simple and a little flawed, but definitely adds to the experience with tactile interaction and sounds.

I played The Nautilus’ Traps with three of my friends. Here’s a recap of our experience!

The Nautilus’ Traps is a medium difficulty Unlock! adventure. We felt super confident coming out of the tutorial, but that didn’t last terribly long. 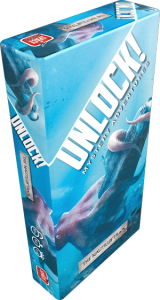 We quickly ran out of air (you begin in scuba gear) troubleshooting the first scene’s clues; one of which we felt was a total troll by the makers and came with a three minute penalty.

Yes, you are timed! But the good news is you can continue your progress even if you go over time, it just affects your ranking (1 to 5 stars) upon completion.

A bit rattled by the first leg of the adventure, we tackled the interior of the submersible with determination. Some of the puzzles were quickly solved, while others stumped us frustratingly. Even more frustrating was hitting the Hint button in the app only to receive no new and useful information.

But, hey, we muddled through, conversing and cooperating all along the way. We even had some fun combing cards that we knew would cause us to incur a penalty (using the wrench on the cracked porthole and then on the sea monster’s tentacles, for instance). We totally dug that the game allowed for that ridiculous string of combinations!

I polled the group after we completed the game. Our pros and cons: 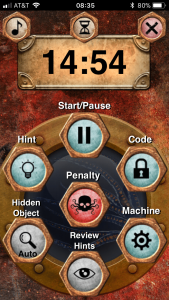 Even though we had some frustrations, my teammates’ first question upon finishing The Nautilus’ Traps was, “Are we going to play the hard one (The Tonipal’s Treasure) now?”

That is a heck of an endorsement for the game.

And as the holidays are upon us, I’d suggest that you could take the last Con and turn it into a huge Pro: the Unlock! games make the perfect white elephant gift. Buy it for yourself, play it, then gift it to someone else! Buy yourself another installment, then rinse and repeat.

The escape room experience is well replicated in this card game. The simple system makes it easy to learn for people of all ages, and the difficulty spectrum (easy, medium, and hard) means there’s an appropriate challenge rating for kids and adults.

Put yourself (the games can be played solo) and your friends to the test with one of the Unlock! games. You can peek at all six titles on the Unlock mini-site or pick them up at your FLGS.

[Disclosure: Asmodee provided Nerds on Earth with copies of the Unlock! games for review.]