Last year, some of the Nerds on Earth team got together and attended DragonCon 2016. It was a great experience but it is also an overwhelming one. There are just so many people and options and it can break your brain if you aren’t careful.

Since EarthNerdClave came down from the great Midwest last year, we gave him the option to find something for us to check out and EarthNerdAdkins and I would fly up from Atlanta. It didn’t take him long to find Gamehole Con.

Gamehole Con is in its fifth year in 2017 and was in Madison, Wisconsin. We definitely knew that it was very tabletop gaming focused and we were excited about that. What we didn’t realize is how much that focus helped make the experience such a fantastic one for us.

First off, as I said, it is very tabletop gaming focused. We were able to play in some Pathfinder games as well as Dungeons and Dragons Adventuers League games over the course of the weekend.

Every game that we played at had a great DM and they were patient with us, especially myself, as I am still pretty new to the Pathfinder system.

We knew what games we were going to be able to play ahead of time, as part of the registration process is registering for specific games ahead of time. This process is pretty smooth overall, though for our group it took some comparisons and swapping to get in the exact sessions that we wanted. But we also had the chance to pick up some sessions at the convention as well. 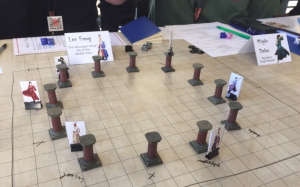 Second, there were more games going on beyond the fantasy games. At one point, as I was writing about Thor Ragnarok at a free table, I was able to listen in on both a Starfinder game for newbies and a demo of another soon to be released game.

Additionally, there was a game library on site where you could borrow a game and then go find a table and play. We didn’t do much in the way of free play but when I eyeballed the library I was impressed that in addition to having old favorites, there were also a fair number of newer games available to borrow and learn how to play.

Third, we got to participate in a session of True Dungeon, which EarthNerd Adkins wrote up for the site. 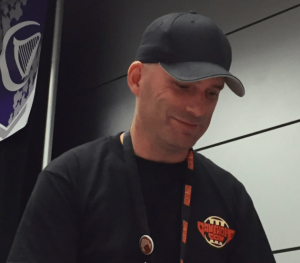 Fourth, much to our joy and surprise, there were seminars available. In these sessions there were around 50 people but they had healthy interaction on both author panels, including a session with Patrick Rothfuss that was fantastic.

And there were great panels that were supported extremely well by Wizards of the Coast staff. When Chris Perkins, Mike Mearls and Chris Lindsey are all on site, you know the event is high on the WoTC priority list. (And Jeremy Crawford would have been in attendance if not for an injury.)

All of the seminars were great but in particular, the one on the state of Dungeons and Dragons 5e was excellent and we were able to put it out on our podcast. There were also some games DM’d by those same folks that were for the charity Extra Life that were well attended and you can still find online on the Dungeons and Dragons Twitch channel.

Last, the facilities are great. The convention center they use is excellent. It has great spaces of various sizes that lets me think the convention can still continue to grow but remain focused on tabletop games.

They smartly used food trucks to bring in affordable food options right on site and there is a connect hotel and other lodging very close nearby.

As much as I love DragonCon as an Atlanta native, the gaming part there can get really lost because there is so much other stuff happening. Having a convention focused on tabletop gaming, that is well supported by one of the largest publishers in the industry made Gamehole Con completely worth the time and energy we invested to be there.

If you are looking for a gaming convention to add to your 2018 plans, I’d recommend checking Gamehole Con out.

[Disclosure: Gamehole Con provided us with 2 press passes for the convention.]

Hear me Out, Midi-Chlorians Are Not Bad

Unlock! Review: An Escape Room Experience in the Palm of Your Hand