Several of the Nerds on Earth writers took a few days of vacation to crash Gamehole Con in Madison, Wisconsin. We played Pathfinder, we played Dungeons and Dragons, we sat in on several panels (one we reported and one we recorded), watched some LARPing, and we tried our hands at Jeff Martin’s True Dungeon.

What Is True Dungeon?

True Dungeon experiences are themed adventures that see participants through a series of rooms, each with their own unique challenge to overcome in order to progress. It is a real life dungeon crawl complete with combat, puzzles, and even LOOT!

You’re given a pre-generated character sheet whose stats and abilities are augmented by
tokens. You receive a bag of ten random tokens upon registering for the experience: 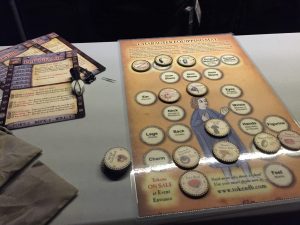 And if you’re lucky, you might even pull an ultra rare!

Some of these tokens are class specific and so they may not work for character, but you’re free to trade tokens with one of the other members of your party to optimize your builds. Sharing is caring!

Once your gear is sorted out, you’re taken into the very important practice room. There you can practice the combat system which is comprised of inserting your weapon tokens into a small puck and sliding it across a table not unlike shuffle board.

While your melee classes are honing their puck-sliding skills, some of your caster classes are busy trying to memorize beads, leaf silhouettes, and runes. Their casting is dependent on their recollection, so study hard!

The rogue also has the chance to try his or her hand at disarming a trap or unlocking a chest by means of tracing a glyph with a stylus while avoiding its edge. Think along the lines of the classic game Operation and you’ve got the right idea.

After a time, the adventurers are taken to the dungeon’s first room and their skills are put to a series of tests!

Progression through the dungeon is linear: Overcome the challenge of Room 1, be it combat or puzzle, and you can move on to Room 2. Each room is timed; both to prevent groups from ending up in the same room at the same time and to add a degree of difficulty.

In a puzzle oriented room, a riddle on the wall provides clues to the solution (and a dextrous Rogue can unlock an additional clue from a glyph-warded chest). Adventurers must put their minds together to arrive at the correct solution in time!

There is some room for trial and error, but the time limit puts a cap on your experimentation. And you’re always doing more than verbally sorting the solution out. You’ve got to execute it somehow, as well:  Plucking the right fruit from a tree, pouring the right potions in the right order into a cauldron, sliding runes on a table in the correct sequence, etc.

This is no pen and paper affair. It is hands on and interactive! 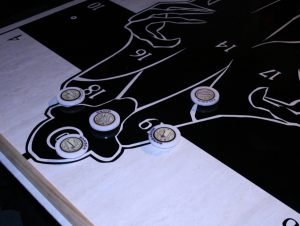 In a combat room, you insert your weapons into a puck and slide it onto a visual representation of your foe to hit and deal damage. Since True Dungeon is built with a d20 system in mind, you are aiming for the crit (the 20 on the board) while also trying to ensure the number representing your greatest damage is facing towards a dot on the board.

The enemy is present in the room with you, as well – verbally harassing you as it rains down blows upon your party.

If you manage to successfully navigate the series of rooms through to the end, you’re rewarded with treasure tokens that can be cashed in for more gear.

We didn’t really know what we were getting in to, but we enjoyed the process, progress, and prizes well enough. Each room is really well produced. Decorated and designed to the nines, it really is quite impressive and immersive.

The puzzles had a reasonable degree of difficulty. We typically solved them fairly quickly, but executing them was another matter on at least one occasion. However, teamwork makes the dream work, and we were victorious!

Combat was interesting, but not terribly consequential for us. Several members of our party had a lot of True Dungeon experience and gear, so we never went more than 2 rounds with a baddie and no one was in danger of dying. In hindsight, we should have stepped up to the Hardcore difficulty!

Our biggest complaint was the amount of time we spent just standing around in a room we’d completed. We’d quickly take care of the enemy combatant or solve the puzzle, only to have to wait several minutes before being allowed to move on. But again, that likely would have been less of a problem if we’d chosen a higher difficulty; at least in the combat rooms.

The True Dungeon was a fun change of pace to our weekend at Gamehole Con. It hit all the same notes we love while sitting at a table throwing dice, but instead of theater of the mind and minis we were doing in real life the very things we’d declare our PCs to do. 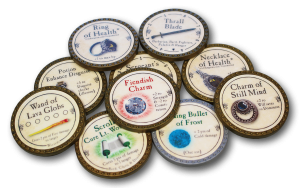 You get to keep whatever tokens you receive before, during, and after play as well. So you can participate multiple times to optimize your load out, our you can buy additional tokens from the organizers or online.

There’s even a really cool trading system upon completion in which someone looks at your tokens and preferred class and trades/sells what you’ve got towards a better set up. That process was actually one of my favorite things about the whole experience.

While replay value for any single dungeon is relatively low (assuming the puzzles don’t change even if combat is made more challenging at higher difficulties), they generally run a few different dungeons at a time. Complete one, fine tune your gear, and move on to the next!

You also earn XP for completing rooms and dungeons. With new levels comes added benefits. You can read about that here.

Check out True Dungeon’s list of upcoming events to find an experience near you and try your hand at the real life dungeon crawl.

7 Dungeons and Dragons Blogs for a Role Playing Newb