The Nerds on Earth team was on site at GameHoleCon in Madison, Wisconsin. As a part of the event, the Wizards of the Coast Adventurers League team discussed the current state of D&D 5e organized play.

If you do not know, Dungeons and Dragons Adventurers League is an organized play effort where people can show up at local gaming shops, bookstores, etc. and play through adventures that are tied to the current primary storyline in the Dungeons and Dragons books. (Currently, it is the happening in the area of Chult in Tomb of Annihilation, which we reviewed here.

In the current season of Adventurers League, they are playing out Tier 1-2 games, which means it is for lower level characters, with the higher level tier 3 and 4 sessions scheduled to be released at the end of January.

Higher Tiers: As part of the discussion about tier 3-4, the creators asked for some input on previous high level adventures and the consensus in the room seemed to support the idea that the previous season of adventures had been very easy to overcome. There was also some talk that the few adventures that did manage to be challenging did so by doing things like limited resources, like limiting the number and durations of rests.

In fairness, when you get to these higher levels, especially Tier 4, you essentially are playing with god-like characters, so to make that a challenge is difficult, especially when you consider that most Adventure League games are played in shops with limited time around the game table in real life; most shops just can’t or won’t give you up to 4 hours of space.

Convention Content: Because it was a convention, the D&D team discussed con created content (CCC). Different conventions like to create original content for their attendees to play through. Though the D&D group has oversight of the materials, they are hands off for playtesting and final edits of material.

Some of the criticism on convention material has been that it hasn’t been well playtested, which really does make a tremendous difference in quality, and that every convention’s material tries to create a massive world spanning event.

The panel discussed that part of the CCC qualifications is to limit the scope to the Moonsea region of the Forgotten Realms and that they also would like to see conventions create material, especially epics, that were done with a narrow focus, not a world spanning one. 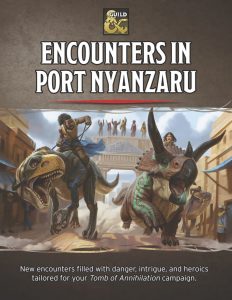 Guild Adepts: Finally, there was some discussion around the new Guild Adept program. Started this fall, with the Tomb of Annihilation storyline, there are creators who have been partnered together and given the challenge to make supplemental materials that support the current storyline.

He also said that the hope is moving forward that all the content that the Adepts create will be playable as Adventurer’s League material, with the exception of when creators create their own unique subclasses and races, which would create some potential issues.

All and all, it was an excellent report on the D&D Adventurers League. As someone who has played and DM’d for organized play, they really are an excellent way to expose the game to new people, while also tying together stories and other promotional products that Wizards of the Coast is creating.

It seems WotC is going to be making some more changes to move Adventurers League into the future as well. Chris Lindsey specifically mentioned that there is a survey coming out in the new few weeks that will do a thorough questionnaire on all things DDAL, with the hope that the survey will help them get good feedback to “move AL into the modern era”, specifically mentioning that a ton of what is done in Adventurer’s League has been done as far back as the earliest programs like it, including the Roleplaying Game Association have done since the 1980s.

Give Adventurers League a try. Here is an online tool that can help you find a local game shop that hosts games.