By Mike Fields On Nov 9, 2017 Last updated May 6, 2018
Share TwitterReddItPinterestFacebookEmailPrint 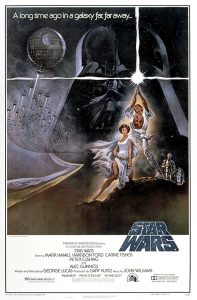 The other day around the Nerds on Earth water cooler, we were talking about our nerd origin stories. When the subject came up, I got a very vivid picture in my mind: 7 year old me is standing in line at the Arrowhead theater to get a ticket to the spectacle. Spaceships, lasers, robots…

The year was 1977, and the spectacle was Star Wars, of course!

I was obsessed! I had all the action figures (even the exclusives you got by sending in cereal box tops), vehicles, play sets, comics, sheets, pillow cases, lunch box, shirts, posters, and even the collectible glasses sold at Burger King.

My childhood was all Star Wars.

Seeing that movie was my nerd origin story. It was my gateway into reading, gaming, fantasy, science fiction, and truth be told, even psychology. 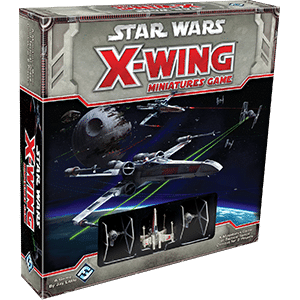 You can imagine my excitement 37 years later, when a friend of mine sent me a link to an episode of Tabletop with Wil Wheaton. Drool fell on my keyboard as I watched in amazement as he demonstrated Star Wars: X-Wing Miniatures from Fantasy Flight Games.

Wait a second…you mean I can fly Slave I and shoot down those rebel scum?! I am SO IN!

My friend got a starter set and we played a quick game that weekend. I was hooked. We both had birthdays coming up so we told our families we wanted tiny spaceships.

I jumped into the X-Wing game the spring of 2014. There were two factions in the game then:

Of course I chose the good guys–the side of order–and my friend chose the terrorists (that way we could have more toys to play with). And it was a glorious time. We played for a couple of hours every weekend.

After only a month or so of gaming we even went to the regional tournament in Atlanta. I went 3-3 and my buddy made the cut to top 8. I even got to play against the brand new TIE Phantom (an awesome ship in the days before they nerfed it). 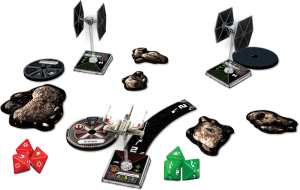 But you might be asking, what is X-Wing Miniatures? You build a squad of Star Wars ships to fly against another squad of ships. There are rules for “buying” ships, pilots, and upgrades if you want to play competitively.

Of course you can also just play for fun and set your own limits to create some fun and interesting battles. Some of the bigger ships even come with scenarios you can play through, just to change things up.

Each ship has a movement dial that gives you choices for how your ship will move. You and your opponent dial in your movement in secret. Then you take turns (based on the skill rating of the pilots in your squad) revealing your dials and using movement templates you place on the table to move your ships.

After the movement phase, you take turns rolling dice to make pew-pew noises (not a requirement, but strongly encouraged) and shoot at your opponents ships.

In the years since I started, Fantasy Flight has added a Scum and Villainy faction – so you can play all your favorite bounty hunters and their ilk, and even added new ships from the Resistance and First Order factions (which can be mixed with their original trilogy counterparts). They have some amazing Epic (read: really big) ships too.

The game is solid strategically, and each new wave of ships provides new options and new challenges. And the models are absolutely stunning! The quality and detail makes for amazing game pieces, and even display worthy collectibles. They aren’t cheap, but if you know anything about miniatures games, that won’t be a surprise to you.

One more thing about the X-Wing game that can’t be overlooked. The X-Wing player community is amazing, supportive, and welcoming. Veteran players love helping rookies get into the game, to help them with rules and strategies. I know here in Atlanta where I played (I’m not on the tournament circuit anymore), I met lots of great people who taught me a lot.

And the best part was we got to share a passion for a franchise that brought us so much joy; all while playing games together, where we pushed around tiny spaceships and made pew-pew noises.