By Skid Maher On Nov 10, 2017 Last updated May 16, 2018
Share TwitterReddItPinterestFacebookEmailPrint

I’m going to let you in on a little secret: I love SyFy’s The Expanse.

Now when I say “secret”, I mean the kind of secret where I aggressively talk about it to everyone I meet, and beg them to watch the show until they evidently swear to avoid it for all time just to spite me. 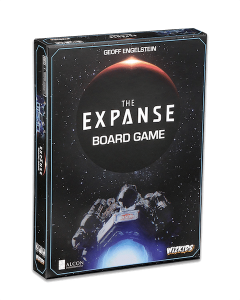 The books are also fantastic, and no one I talk to will read those either. I just finished Leviathan Wakes by James S.A. Corey (who is actually two people! WHAT TECHNO-WITCHCRAFT IS THIS) and it does a great job filling in a lot of the details left unexplained in the show. Did you know why Martian pilot Alex Kamal has a Texan accent? The answer may surprise you!

But yeah, I like it. It’s the kind of science fiction I dearly love, and has mostly been missing from television since the Battlestar Galactica reboot went off the air. Whip smart and scientifically sound, with great production values and solid-to-excellent on screen talent.

Plus (spoiler alert), I’m working really hard to master Jared Harris’s particular flavor of Belter Creole to use for my character on the Glass Cannon podcast’s upcoming Starfinder show. Call me crazy, but I might be the perfect person to review The Expanse board game from WizKids and designer Geoff Engelstein. And I’m glad, because it’s pretty darned good.

Review of The Expanse Board Game

For those who don’t know, the story of The Expanse is set in our solar system some two hundred years in the future. Four political entities struggle for control, and comprise the playable factions:

It’s an interplanetary cold war that threatens to become hot at any moment, which is why it’s not surprising that the game is very much reminiscent of GMT’s classic Twilight Struggle (a fantastic game about U.S.-Soviet conflict from 1945-1989). Just like that game, the emphasis in The Expanse is on subterfuge and intrigue rather than open conflict, and high player bluff skills are definitely rewarded.

However the fact that there are four playable factions rather than two is a welcome difference, and can make for some fun and unpredictable game play. 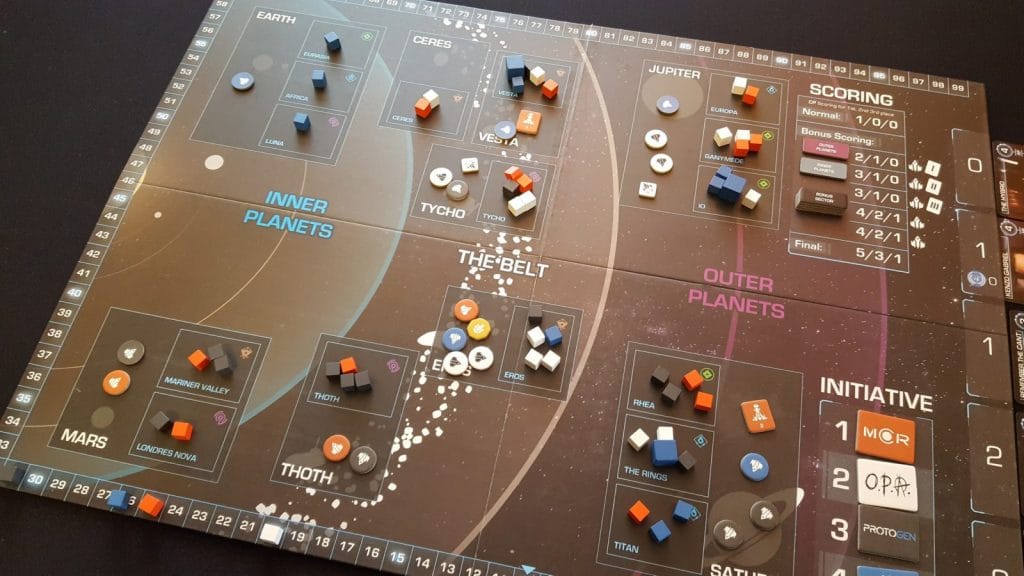 Everything works well here. The factions use political influence and maneuver fleets of starships to exert control of bases set in zones throughout the solar system, which in turn nets players Control Points at the end of each round.

Event cards come into play and shake things up in often unexpected ways, and can be “purchased” by players for later use. This often leads to tense guessing games, as people try to predict when a dreaded card might finally be activated and throw a monkey wrench into the wheels of a well planned maneuver.

There’s also a devious mechanic where players secretly designate a bonus sector, which will provide extra points for assets held within it. This leads to even more guessing games, and perhaps fistfights (depending on if you are playing with the Glass Cannon’s Joe O’Brien).

But I think my favorite mechanic is one that I also found the most illuminating of the source material. Each round the player with the fewest Control Points gains control of The Rocinante – the trusty, stolen Martian corvette crewed by the show’s protagonists. 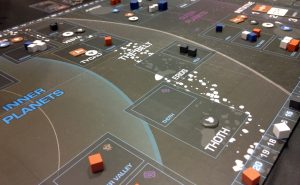 The player can use any one of its four special abilities on their turn, one for each character on board. Accidental hero James Holden can exert one additional influence anywhere on the board, while the tough as nails Amos Burton can remove opposing fleets in orbit.

It helps keep the game tight all the way through as players are less likely to fall too far behind. I was also impressed at how nicely it captures the way the characters in the story do the same thing, racing around the system trying desperately to keep a precarious power balance from shifting too much to one side or another. This admittedly obvious realization never occurred to me while watching the show or reading the books, so thanks board game!

The art design is also top notch. Space is a dangerous place, and the stark blackness and intimidating planets on the board effectively get this feeling across. Still shots from the show appear on the faction and event cards and are a welcome addition. I would have liked some detailed ship model tokens, but at this price point the cardboard chits are fine.

I give this clever little gem four nerd emoticons out of five. The atmosphere and gameplay are top notch, and it’s absolutely worthy of the excellent license. Great value for your money. Play it, and then please WATCH THE SHOW AND READ THE BOOKS AND TALK TO ME ABOUT THE SHOW AND/OR THE BOOKS THANK YOU!

[Skid Maher is a cast member in the Glass Cannon Podcast. If you aren’t listening to the GCP, then that’s just ridiculous, and you need to start doing so.]

[Disclosure: Wizkids provided Nerds on Earth a copy of The Expanse for review.]

Part of the Glass Cannon Podcast.

Board Game Review: Solve ‘Whodunit’ in the Suspects Board Game by Studio…