Autonomous: A YA Book with an Important Message

Take a quick second to imagine what it would be like if your digital life went 100% public. Every key tapped, every website visited, every text sent. How does that make you feel? More importantly, how might your anxieties affect your digital life from hereon out?

Autonomous by author Andy Marino invites readers to participate in this thought experiment by climbing into Otto – a driverless car whose AI adapts to its passengers’ digital histories. The book clearly has young adults in its headlights (read: as its target audience), but will they hitch a ride?

Autonomous: A Plot with a Purpose

Autonomous  will make a bit of splash…but not really because of its plot. At the book’s end, I couldn’t really think of the plot as much more than a veneer for the book’s commentary. It read more like a long form parable than a novel.

Let me explain it this way: 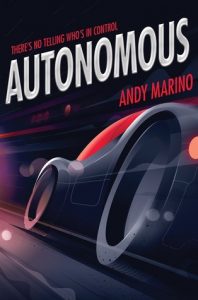 I used to facilitate a book club at a local high school. We’d discuss a book over pizza twice a month, covering things like themes, narrative, characterizations, real world parallels and/or application, etc. If I’d lead that club through  Autonomous, I don’t believe we’d spend more than a couple of minutes talking about any narrative moment from the novel (although I absolutely would have brought up the mic drop that William performs during his news interview because it made me laugh). Instead, I 100% know that the discussion would focus solely and unwaveringly on the thought experiment I posed at the top of the post.

This isn’t to say that the plot is a failure of the book. Possibly quite the contrary! As a vehicle (pun intended) for digital life evaluation, it is hugely successful. And given its YA aims, I’d argue further that it is needed!

What Marino Does Well

Before I talk about the commentary bomb Marino drops in a bit more detail, let me briefly highlight what he does well literarily. It is a book review, after all.

Marino does a fantastic job of characterizing the four main characters: William, Melissa, Christina, and Daniel. The novel weaves in and out of each character’s perspective and each feels distinct. They’ve all got the subtype “Teenager” and most fall into one of the classic, trope-y categories (jock, beauty, nerd, etc), but by granting us unrestricted access to their private thoughts, Marino establishes each as an individual really well.  They aren’t hollow characters or one dimensional; they’ve all got appreciable depth.

Most of what you learn about each character you learn from the character themselves. There’s not a ton of expository dialogue (which is good because those tend to feel clunky); you just occupy the character’s brain for a bit and get it all first hand.

He also writes readably. I’m not sure how else to say it, really. The book just reads well. It has a sort of constant motion to it and never seems to bog down. Part of that is due to its structure (super short chapter lengths, which I always love), but most of it is just due to Marino’s writing style. It fits snugly into the YA genre, for sure.

I really can’t stress enough how much I value the message or challenge of  Autonomous. I may be biased here a bit (I don’t have teens of my own, but I am a youth pastor), but I feel like today’s teens could use a good scaring when it comes to their “private” digital lives, and  Autonomous  delivers on that front. 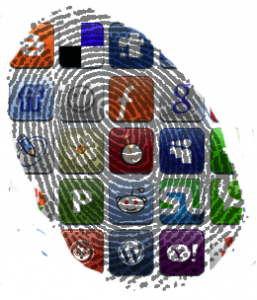 When I read the synopsis on the back cover, I immediately tweeted that I might be holding the scariest book ever written. I’m in my 30s, so by the time I could start forging my own digital life it was super limited and by the time it was limitless I had the maturity and wisdom needed to keep myself from doing dumb things. That said, I  still  wouldn’t want my digital life exposed!

Now think about today’s teenagers…To many of them, private/unknown = consequence-less and whatever they press “delete” on is gone forever without a trace. Neither of those things is true in reality, but it is in their perception.

But steadily our digital lives (even our secret digital lives) are heavily affecting our “real” lives. It can be as subtle as the ads our Facebook feed displays or as devastating as how we perceive the opposite sex (i.e. objectification). And to be honest…I’m not convinced some teens know which “version” of themselves is the real them: The person they are digitally, or the person they are IRL (in real life).

Autonomous functions as a parable that says, “Hey, what you do with your phones/computers…it is  real, carries with it  real consequences, and it is telling of who you  really are, so pay attention and be wise.” There is power in that.

Andy Marino ultimately does a good job with  Autonomous. The highest praise one can bestow upon a book is the recommendation that it be read, and I’ve already begun doing that with teens. We might not talk about Melissa and Daniel’s relationship or the cool laser tag game, but what we  will  talk about has significance beyond  Autonomous‘s narrative, and that’s enough for me.

You can preorder  Autonomous  by Andy Marino from Amazon ahead of its early April release date here.

Little Wars: A Game for Boys of Twelve Years of Age to One Hundred and Fifty and for That More Intelligent Sort of Girl Who Likes Boys’ Games and Books